Public Libraries Continue to Thrive Despite Defunding and Privatization Attacks

The public sector in the US has been shrinking rapidly since the 1990s as a deluge of privatization has, to various degrees, overtaken many so-called public services and institutions. Public education, for example, has been increasingly privatized by way of racist school voucher programs, and the expansion of for-profit charter schools and for-profit education management organizations (EMOs).

Public libraries may be the last truly public institution. Linda Stack-Nelson’s essay “The Last Free Space,” published in 2018 by World Literature Today, is a “love letter to public libraries” that details the reasons these uniquely public entities are essential. In it, she salutes the fact that public libraries offer much more than free books, noting the classes, workshops, internet access, resume and tax help, community gathering events, and so forth that libraries provide. However, she argues, this “plethora of resources and opportunities for community” that libraries provide is not the sole reason they are important. 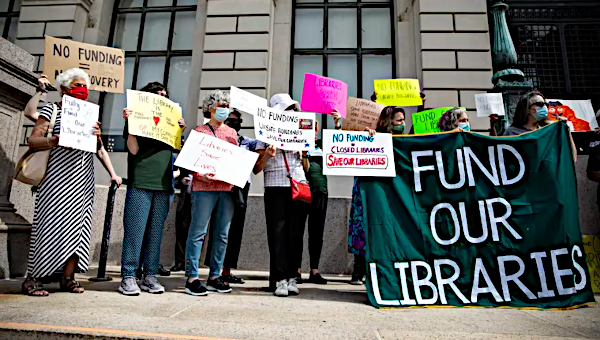 “Libraries are the last place in every town and city that people can simply exist,” Stack-Nelson writes. “Every building one enters today comes with some expectation of spending money.”

“In a library, no one is asked to pay anything simply to sit. For those with few resources besides time, this is a godsend. Libraries are unofficial playgrounds for low-income families on rainy days, homeless shelters in cold months, reprieves from broken homes for grade-school-age children. They are the last bastions of quiet and calm where nothing is asked of one but to exist. Many arguments have been made about how the library is an outdated institution offering outdated services – that in the 21st century, how-to books on building sheds and daily newspaper copies are obsolete and the funding used for libraries ought to be reallocated to other programs. I can only assume that those who make such arguments are people who have always been comfortable with the expenditures it takes to move through the world, whose presence has never been questioned. For those people, libraries can be about books. But not everyone has the luxury of seeing past the space.”

The very existence of public libraries, from this perspective, can be seen as an emblem for the people. American Library Association (ALA) President Lessa Kanani’opua Pelayo-Lozada said in November 2022, in an interview with Independent Media Institute, that the public library has been an “enduring symbol of democracy.”

“Democracy is listed as one of ALA’s Core Values of Librarianship,” she said. “Regarding this core value, the ALA Council notes that ‘The publicly supported library provides free and equal access to information for all people of the community the library serves.’ The ALA Council also previously stated that libraries are an ‘American Value’; they are at the heart of the community – a resource for people of any age to find what they need to help improve their quality of life.”

Pelayo-Lozada said this love affair is likely due to the fact that millennials as a generation were entering adulthood “during a recession and through multiple life-changing world events.”

“Millennials understand the importance of free and equitable access to information as well as the need to support those institutions that provide it,” she said. “From a practical standpoint, as pay increases do not match living expense increases, access to the public library allows millennials to enjoy culture and participate in education and learning at no cost, helping to alleviate some of the financial pressures they may be experiencing.”

While the public library system has remained steadfast in what many Americans would agree is its traditional function – the ALA’s first-listed core value is to be a space that offers access to information – Pelayo-Lozada pointed out that it has evolved significantly over time. In recent years, for instance, many libraries across the US have been doing away with late fees. Studies by various library systems showed late fees primarily impacted people living in poor neighborhoods where the residents are more likely communities of people of color.

“The mission of the library has always been about access to information, literacy, learning, and culture,” Pelayo-Lozada said. “Public libraries have evolved from spaces that included membership fees and practiced exclusion based on class and race to spaces that are open for all. The ability of the public library to reimagine itself to the needs of society has been an ongoing significant achievement.”

The ALA released a Resolution on Monetary Library Fines as a Form of Social Inequity in 2019 that details its decision to support eliminating late fees charged by public libraries.

She notes that because libraries are “hyperlocal institutions,” they have been able to translate the overarching mission of the public library in a range of ways over time, as needs and challenges have arisen.

“As the world navigated the [COVID-19] pandemic, many libraries expanded the range of support they offer for workforce and small business development – including formal coworking spaces, networking events, and programs to assist with the development of business plans or market research,” she said. “As the needs of our communities change, so do the services and resources available through our libraries, from a Library of Things, to mobile technology labs, to vibrant maker spaces.”

She said in recent years the library system added sustainability as a core value of librarianship, and ALA works to support libraries in the development of sustainable models.

“Libraries play an important and unique role in promoting community awareness about resilience, climate change, and a sustainable future,” she said.

Historically, the development of the public library system in the US has in many ways pushed the edges of the concept of public institutions. The small Peterborough Town Library in New Hampshire, established in 1833, was the first documented free, public library in the world. In the period between 1870 and 1930, local public libraries emerged as a widespread institution of community life.

Pelayo-Lozada said in comparison to public libraries from around the world, “American libraries often set the standard for the type of experiences and materials offered to patrons.”

“International counterparts have said that the advocacy work we do for all communities such as emerging ethnic communities and services to the incarcerated support their mission to bring these types of demographic-focused services to their own libraries when administrators may interpret more homogenous communities,” she said.

“Because libraries have the ability to serve as innovative and creative spaces, there are opportunities to pilot, test, and launch various types of programming, which can be case-studied, replicated, and adapted to fit the needs of libraries in their respective communities.”

One example of this, she said, is ALA’s Libraries Build Business initiative. For the initiative, 13 libraries received grants to start or grow small business programming, in an effort to provide support, advice, and networking opportunities around small businesses and entrepreneurship. The cohort collaborated to answer questions, pilot projects, develop resources, and share what they learned with the wider library community.

While the international community may look to America’s libraries as exemplary, support for public libraries in the US has been a mixed bag. In the sociopolitical climate in the US, especially following four years of divisive Trump administration rhetoric, there has been an increased politicization of information and data. Some states and cities have been in the process of defunding public libraries. There has been a movement by the far right to censor books in schools and efforts to ban some books entirely. 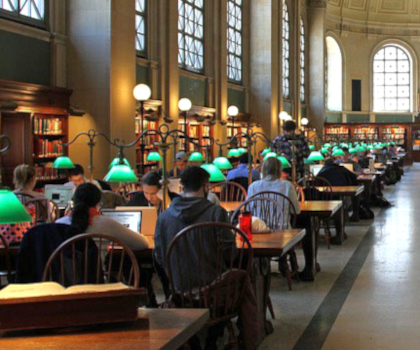 She said efforts by governments and cities across the nation to defund the public library indicate “a threat and a misunderstanding of the essential role that libraries play in our society and our democracy.”

“By breaking down institutions that support the public good, those who are threatening to decrease funding are breaking down the very fabric of our society and our right to information,” she said.

She said in an increasingly divided world, many people use information and access to information to disenfranchised communities from being full participants in society.

“Libraries and library workers are attacked as a tool of a minority of voices seeking to silence diverse ideas and abolish free and equitable access to information, eroding this country’s commitment to freedom of expression,” she said. “Operating in this world, public libraries are essential public goods that allow individuals to bring these ideas together and learn from each other, at no cost to the individual. As a true public benefit, public libraries are essential to creating an inclusive society where everyone is able to fully participate.” •