Premier Doug Ford wants for-profit surgical clinics – but that is just one area where his government is privatizing hospitals. Unfortunately, there is so much more.

The privatized American healthcare disaster is on full display right on our doorstep. According to the US government 31.6 million Americans have no health insurance whatsoever, including 3.7 million children. Many millions more have inadequate health insurance.

A recent survey indicates that 43 percent of working-age adults were inadequately insured in 2022. Twenty-nine percent of people with employer coverage and 44 percent of those with individual coverage were underinsured. Forty-six percent of respondents said they had skipped or delayed care because of the cost, and 42 percent said they had problems paying medical bills or were paying off medical debt. Medical bills hit African Americans and Latinx/Hispanics especially hard. 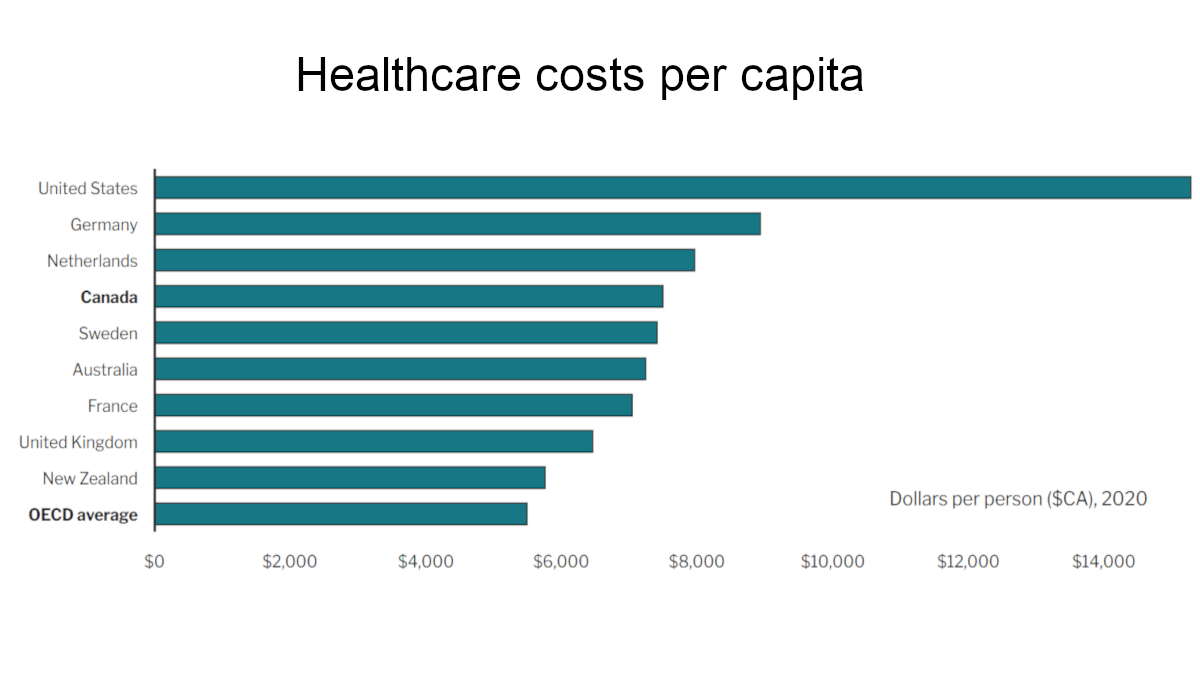 Ontarians cannot afford these extra costs – especially not now when incomes are rapidly shrinking due to inflation. Regardless, Ford trudges towards healthcare privatization on multiple fronts, suggesting this will save us. Notably, the last PC government claimed in the 1990s that shutting hospitals and hospital beds would save us. Thousands of beds were shut and now we have a capacity crisis, very high beds occupancy, and a lack of hospital staff.

For-Profit Surgical and Diagnostic Clinics: These have existed for some time but only on a very minor scale in Ontario. Total provincial funding for so-called “Independent Health Facilities” (IHFs) is about one quarter of one percent of hospital funding – and almost all of these facilities do not perform anything as major as a surgery. While proponents of privatization like to note some of these facilities are not-for-profit, 97% of IHFs are for-profit.

They are also unable to deal with emergencies and so in 2007 a young woman bled out in a plastic surgery clinic while waiting for an ambulance when the operation went badly. (Waiting for an ambulance to take a patient to a hospital when things go wrong is even more frightening nowadays. With a lack of capacity, ambulance services often have zero or near zero ambulances to respond to emergencies.) The doctor performing the operation was in this case not a surgeon but a family physician. 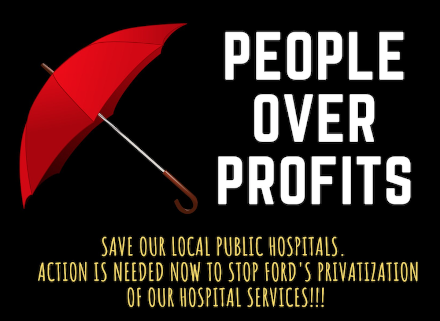 The Ontario Medial Association (OMA) put out a study in early 2022 backing the development of more clinics. In that study the OMA took an agnostic position on whether the clinics or mini hospitals could be for-profit. The OMA was, however, critical of the IHF model. Later in 2022, the OMA formally called for the development of a new model of not-for-profit clinics – a process that would take some years. It is apparent, however, that some want for-profit clinics and are opposed to the considered approach the OMA has advocated. That would be too slow, they suggest. If only there was such urgency to expand public, not-for-profit care – e.g. public hospital facilities that are already up and running.

Ford endlessly claims that all services will be paid for through “OHIP,” but research conducted by the Ontario Health Coalition clearly shows that for years private clinics took public funding and extra-billed patients. The Ford government has done nothing to stop this – although it is contrary to the Canada Health Act and limits access to care, particularly for lower income families and elders.

Rural areas and towns are especially threatened by these clinics – they will gobble up scarce staff and they will go where the money is – and that will not include less populated parts of the province. Care dollars and healthcare jobs will be directed to clinics far away, even as small and rural hospitals cannot even keep their emergency rooms open because of a lack of staff.

Keeping surgical clinics in or adjacent to hospitals means emergencies can be dealt with quickly and seamlessly at the hospital. A direct relationship with the hospital will also integrate services, prevent fragmentation, prevent profit-taking, allow the coordination and proper distribution of staffing resources, create a workplace with more career opportunities for staff, and facilitate the use of existing hospital resources to support the surgical clinics.

Moving Low Acuity Hospital Patients to Beds in “Reactivation” or “Transitional Care” Centres: The Ford PC government passed the Connecting People to Home and Community Care Act, 2020. It facilitates hospital privatization in two ways: First, it allows the expansion of the small number of for-profit hospitals in Ontario. Private, for-profit hospitals have been frozen for years – but this Bill modifies the Private Hospital Act to allow them to expand “home and community care” beds. Apparently, “home and community care” can happen in for-profit institutional facilities nowadays.

Similarly, the Act also adds unlicensed “residential congregate care settings” as a location for “home and community care services” – with no restrictions on for-profit operators. Instead of public hospitals, these unlicensed congregate care homes would provide rehabilitative, transitional, or other care.

Under the previous Mike Harris PC government, home care was largely privatized. The result was chaotic service and very low wages. OCHU/CUPE had to have a pitched battle with University Health Network (UHN) when they contracted out reactivation services to a home care organization at their Hillcrest site. The PSWs operating the beds were paid $16.50 an hour. While OCHU/CUPE was ultimately able to force UHN to take the work back in-house, many more such projects are underway. Like so much of what Ford is up to, a key goal is to reduce the wages for the female hospital workforce.

Contracting-out is rapidly increasing: Ontario hospitals have dramatically increased spending on contracted-out services. In 2005/6 Ontario hospitals spent 1.8% of total expenditures on contracting-out services. By 2020/21 that had doubled to 3.6%. In dollar terms, such expenditures had increased from $280-million to $1.03-billion, an almost four-fold increase in fifteen years. 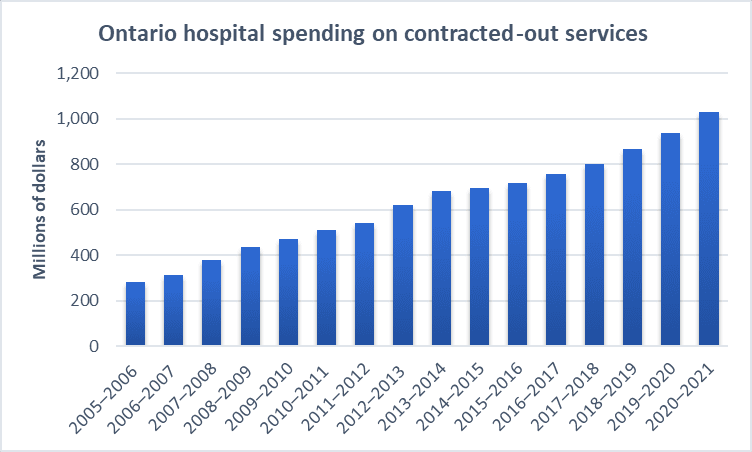 Across Canada, hospitals spend more on contracted-out services than in Ontario: 4.25% of total expenditures. But the rate of increase is slower across Canada – from 3.7% in 2005/6 to 4.7% in 2020-21. The increase in spending on contracted-out services in Ontario over the last fifteen years accounts for more than half of the total increase across Canada ($750-million of a total $1.3-billion increase). Private contractors are targeting Ontario hospitals for growth.

Consistent with this trend (and the cuts applied to hospital workers and their wages), spending by hospitals on employee compensation is declining as a percentage of total spending, declining from 64% in 2005/6 to 59% in 2020/1 in Ontario. This is in complete contrast with other parts of Canada – which saw an increase from 65% to 67%. If Ontario hospitals have budget problems, it is not because of spending on hospital employees. 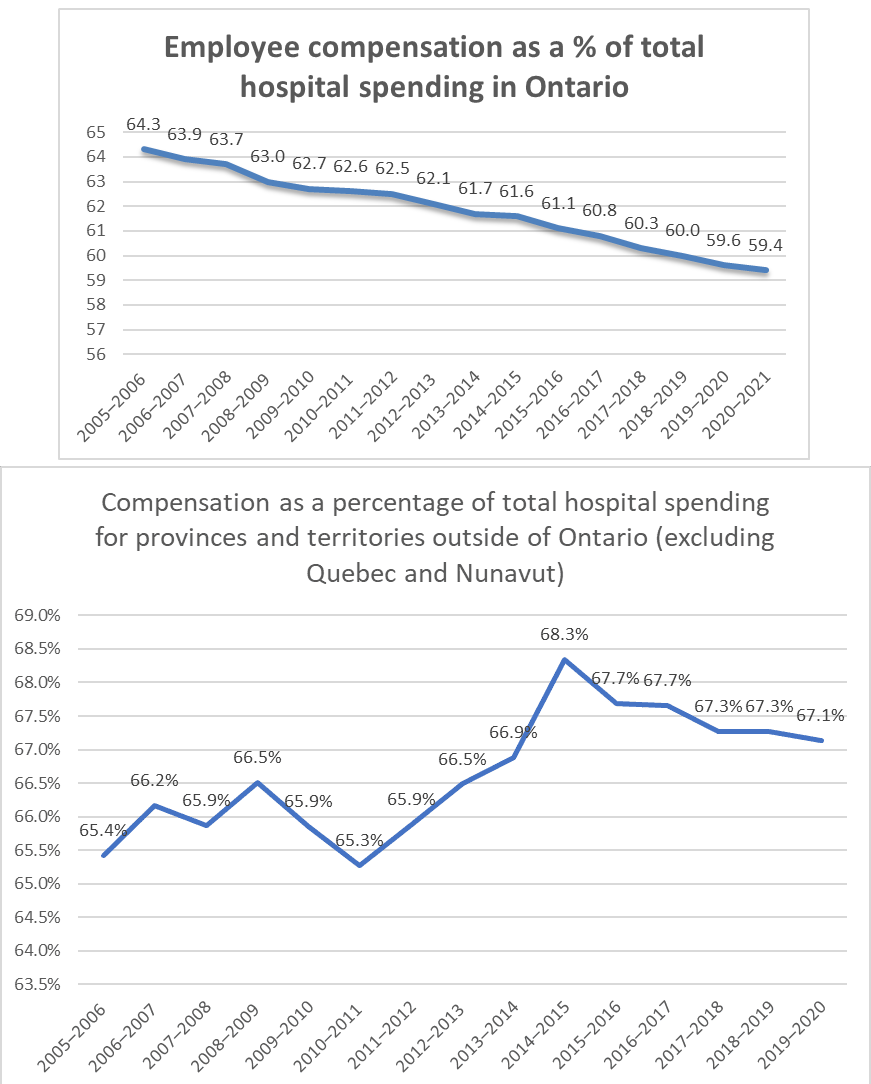 Public Private Partnership (P3) Privatization: For the last twenty years, governments have developed new hospitals facilities in Ontario through privatized P3s. Initially, when this method of facility procurement was first developed, most CUPE hospital service jobs were contracted out with the P3. For the first two P3 projects, over a thousand support jobs were turned over to the privatized P3 consortia. After extensive campaigns by the Ontario Health Coalition and the labour movement, the privatization was dramatically narrowed to just the HVAC and other building facility functions – perhaps 10 or 20 jobs in a major hospital.

OCHU/CUPE’s contracting out collective agreement protections also allowed the contracted out facility workers to maintain their union contracts with the same rights as hospital employees.

Nevertheless, the privatization of the financing and other problems with this model have cost the public billions of dollars in extra costs, as has been well documented in two separate reviews by two different Auditor Generals. Spending on hospital infrastructure has sky-rocketed. Other P3 projects were over-budget, were delayed by years, or resulted in law suits and a variety of quality problems (various LRT projects in Ontario are good examples). And others still have proven very costly to the pubic (tolls on Highway 407) or have led to criminal prosecution and jailing of the top government official (the gas plants). Despite all of these problems, the Ford government remains fully committed to P3 privatization. •