The Ontario Conservative government of Doug Ford released what it called a five-point healthcare plan this morning in a press conference. In summary:

“Cutting through all the bafflegab, today’s announcement had very little to improve public healthcare and a lot to promote for-profit privatization,” said Natalie Mehra, executive director. “The bottom line is the Ford government is using the healthcare crisis to privatize Ontario’s public hospital services and to push seniors out to fill long-term care beds in the worst nursing homes that no one wants to go to because they have terrible reputations, most of them for-profit. It is all couched in very carefully selected and manipulative language, but the actual policy changes they are proposing are clear and they clearly benefit for-profit companies at the expense of patients, particularly seniors.”

The Coalition issued the following fact checker on the Ford government statements and what these announcements mean. 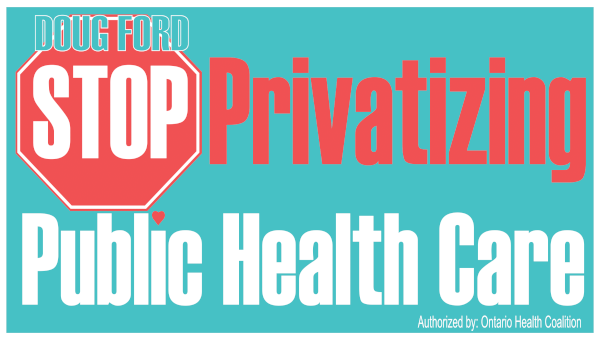 The Ford government has repeatedly announced that they are going to bring in thousands, even tens of thousands of PSWs and nurses over the last two years. They continue to ignore entirely the critical shortage of health professionals (MRI, CT and Laboratory Technologists, Respiratory Therapists and others). Despite the government’s repeated announcements, the staff have not materialized and Ontario’s hospital critical and emergency care are now in an unprecedented staffing crisis. The government has not acted upon comprehensive recommendations to attract back staff who have left and to urgently enact emergency measures to mitigate the crisis. The Minister of Health continued today fail to acknowledge that there is a crisis.

The supposed plan for 6,000 staff announced today and 400 internationally trained nurses bear no relation to the actual shortages. There are more than 20,000 nursing vacancies in Ontario. Hospitals are closing MRIs overnight and respiratory therapists (responsible for ventilating COVID-19 patents and others) describe being unable to do all the overtime they are being called upon to do. Ontario long-term care homes require 37,000 nurses and PSWs to meet care needs and crisis level shortages continue across the province. Home care also has an unprecedented staffing shortage leaving patients without any access to home care or left at home waiting with home visits missed.

The claims by Premier Ford that it is normal for emergency departments and critical care to shut down in hospitals across the province is false. In the Ontario Health Coalition’s fifty years of existence, the widespread closures we are seeing this summer have never happened before. In fact, emergency department closures are very rare and have only happened in a few small hospitals as a last resort. We are not aware of critical care units shutting down due to shortages ever.

The Health Minister’s refusal to acknowledge that there is an unprecedented healthcare staffing crisis is disputed by everyone from from line physicians, nurses, health professionals and PSWs to the leaders of long-term care, home care and clinical hospital leaders. The current crisis is unprecedented and very real. It is threatening needed care for patients.

Despite the Premier’s claim that the government cannot control price gauging by private for-profit staffing agencies, the Premier announced in the pandemic that he would stop price gauging and even launched a toll-free number for Ontarians to report it. The previous government agreed to make amendments to legislation to require a reduction in the use of agency staff. It is false that the government has no power over the corrosive practices and predatory pricing of the for-profit staffing industry.

It is false for the Minister to assert that privatizing the provision of hospital surgeries and diagnostics will not result in two-tier healthcare and user charges for patients. Across Canada the overwhelming majority of hospital surgeries and MRIs/CTs are done in public hospitals operated on a non-profit basis in the public interest. However, there have been ongoing attempts to privatize these services by governments close to the for-profit corporations.

We have, multiple times called every private clinic in the country and have caught the majority of them charging patients thousands of dollars for healthcare services. We have published the transcripts of those calls and surveys of hundreds of patients giving the evidence of these violations of the Canada Health Act and provincial laws that prohibit charging patients user fees amounting to double, quadruple or even five-times the cost under public healthcare: $1000 for an MRI that costs around $300 under OHIP. $2000 for cataract surgery that costs $550 under OHIP.

The evidence is that the private clinics sell all kinds of medically unnecessary add-ons, upsell extra unneeded diagnostic tests to elderly patients, and engage in unethical self-referral, requiring their patients to pay hundreds or thousands of dollars in out-of-pocket charges. The evidence is that the for-profit privatization of public hospital services poses an existential threat to single-tier public medicare.

The Ontario Health Coalition held 20 press conferences in the months leading into the election warning that the Ford government was planning to privatize surgeries and diagnostics. They categorically denied it in numerous media interviews but are now, a few months after the election doing precisely what they proclaimed they were not planning to do.

Here is a sampling of the Ford government spokesperson’s statements weeks before the provincial election call: “These claims are categorically false,” said Hilkene. “To be clear, the government is committed to supporting the province’s public healthcare system. The use or function of private hospitals and independent health facilities in Ontario is not being expanded or changed.” Their statements are available here, here and here.

Long-Term Care Minister Paul Calandra’s claims that this initiative is to allow conversation is so manipulative as to be false. Obviously, hospital discharge planners already have the ability, and have always had the ability, to have conversations with patients to move them out of hospitals. What they are not allowed to do is coerce patients. Patients already have to choose a minimum of five LTC homes to shortlist and there are an array of measures to pressure patients to move out of hospitals. Already coercive tactics to push the elderly out of hospitals without care or to inadequate places is one of the most common cause of complaint received by patient advocates. The change proposed by the government enables them to push elderly patients into places not of their choosing.

The claim that these moves will be temporary is false. The life expectancy of seniors entering long-term care is 18 months. Many will never make it to a home of their choice. Many will die in a place they do not want to live.

The claim that this will fix the hospital staffing crisis is false. Emergency departments and Intensive care units are staffed by specialized RNs and health professionals. Alternate care units where seniors are waiting for long-term care are staffed by PSWs and RPNs primarily. They are not transferable.

We think this announcement is about filling up the beds of the long-term care homes that are empty – the worst homes, primarily for-profits where no one wants to go. The public and non-profit homes have always had longer wait lists than the for-profits. Since the horrific exposés in the pandemic, Ontarians more widely have heard about the terrible long-term care homes and do not choose them for their shortlists. The LTC operators do not get full funding unless their beds are 98% full. Forcing or otherwise pressuring the elderly into terrible homes that they do not want to go to, especially as it is likely the place they will die, is odious.

For the Ontario news media, please note that the odious description of seniors as “taking up” hospital beds that we have heard all day on major newscasts is ageist and wrong. Seniors have the same right to hospital care as younger people. They do not “take up” resources that they are not entitled to. They are not bed blockers. They have suffered enormously and died as a result of discriminatory policies pushing them out of hospitals, refusing them access to hospital care when they needed it, refusing transfers to hospitals from long-term care, particularly in the pandemic. •