Organizing Under and Against Apartheid: The New Unions in Palestine

The Palestine New Federation of Trade Unions (the New Unions) started as a small union organizing workers in the agricultural sector, known as the Union of Workers Associations in the Food Industries and Agriculture (UWAFIA). In October 2007, eighty Palestinian workers who used to work in Seoul Orr, one of the seven factories located in the illegal industrial settlement zone of Nitzani Shalom (on land confiscated by an Israeli military order from Palestinians in Tulkarm, occupied West Bank) went on an open strike.

The strike was a protest against the animal-like working conditions the workers endured for years. Five workers died due to the lack of protection measures and the dire working conditions in the factory. The strike lasted for eight months, during which grassroots organizers within the UWAFIA and workers were threatened by Israeli intelligence to cancel the strike – which the workers refused. After eight months of striking, the factory was taken over by an Israeli bank, while the striking workers received seven million Israeli shekels in compensation for the denial of their rights in previous years. Following that victory, the Palestine New Federation of Trade Unions was created as a grassroots-led and independent trade union. 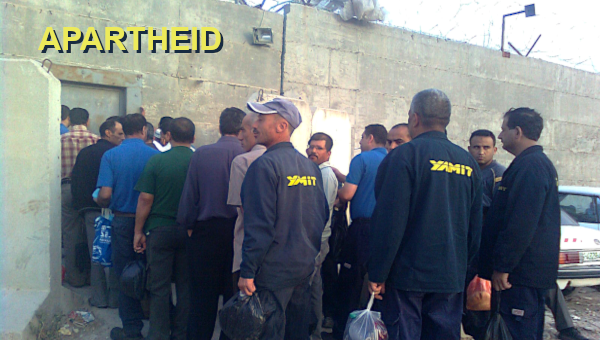 Both Sides of the Green Line

The New Unions organizes Palestinian workers (both formal and informal) working for Palestinian employers, as well as in Israeli corporations on both sides of the Green Line (the line marking the border between pre-1967 Israel and the occupied Palestinian territories). Due to the Israeli blockade of Gaza and the isolation of Jerusalem from the rest of the West Bank, the New Unions is unable to unionize workers in these two areas.

There are a number of challenges facing the unionization of Palestinian workers in Israeli corporations. First, mainstream Palestinian trade unions are controlled and co-opted by political parties; thus, they follow the agenda of these parties in the unionization of workers. This has badly affected workers and their rights. Accordingly, over decades, workers have lost their trust in mainstream trade unions. Part of the effort of the New Unions is to rebuild the trust of workers in the importance of trade unionization and demanding their rights through it.

Another challenge is Israeli restrictions on the movement of Palestinians, meaning that members of the New Unions can’t access Israeli corporations where workers work, either in illegal settlements in the West Bank or in 1948 Palestine (present-day Israel). This makes it more difficult to find out more about the challenges the workers face, as well as to communicate with them. Yet, since it was created, the New Unions has been able to organize 15 000 Palestinian workers in both Israeli and Palestinian-operated corporations. Members of the New Unions meet workers at Israeli military checkpoints, which they cross daily to get to work in Israeli corporations.

Palestinians who work in illegal settlements in the West Bank are issued another type of permit by the Israeli Civil Administration, which needs to be approved by the Shin Bet, Israel’s intelligence organization. The Shin Bet was founded on the violence of Jewish paramilitary activities before the formation of Israel. Yet more than a half of the Palestinian workers who work in Israel or the settlements are denied a permit; therefore, they get to work in illegal, usually dangerous, ways. These workers who are denied permits to get to work have ‘unclean’ security records, according to the Shin Bet; by unclean security records, the Israeli authorities mean that the workers themselves or their families are or were involved in resistance to the occupation in the past. Palestinian workers who have permits can’t easily ask for their basic labour rights from their Israeli employers, because the permit can be annulled at any time, especially when workers demand their rights or try to unionize, or if they (or one of their family members) engage in any kind of political activity. Those who don’t have permits can easily be fired if they dare to protest their employers’ exploitative practices because they are considered illegal workers who get to work illegally by ‘smuggling’ themselves through the open parts of the Wall. So, in one way or another, the working permit system forces workers to live in a state of surveillance, subjugation and capitulation.

In the same year as the suspension of the PLC, Salam Fayyad was appointed to the position of the prime minister, where he started introducing and pursing neoliberal policies. Such policies were and continue to be part of a broader US neoliberal global agenda, as part of the so-called peace process between Palestinians and Israelis. Successive prime ministers have been implementing these policies to benefit Palestinian business people in the private sector and the global neoliberal agenda at large, to the detriment of Palestinian workers and their labour rights.

The Israeli three-tiered system of oppression – settler colonialism, military occupation and apartheid – which has been strangling the Palestinian economy, shows the global agenda of capitalist globalization at its worst when it intersects with other oppressive systems. The Palestinian Authority, which controls the Palestine Liberation Organization, has become a guardian of neoliberal interests in Palestine rather than a custodian of the national liberation project. The interests of those enforcing neoliberal practices in the OPT contradict the national liberation project, especially as Western powers which support neoliberalism in the OPT control the agenda of Palestinian resistance through donor support in the name of depoliticized development and state-building in Palestine.

Israel’s gradual separation of the West Bank from the Gaza Strip over the course of three decades has reflected in the economies of the two territories and their role in and significance for the Israeli economy. Currently, more than 130 000 Palestinians are estimated to work for Israeli corporations on both sides of the Green Line.1 The vast majority of these workers are from the West Bank. Part of the Israeli blockade of the Gaza Strip is closing off Israeli markets from the tens of thousands of workers in the Gaza Strip. Currently, 54% of Palestinians in the Gaza Strip are unemployed. This is only an indicator of the dependency of the Palestinian economy on the Israeli one thanks to decades of colonialization, land grabs and plunder of natural resources, particularly water.

On the other hand, opening up the Israeli market to the labour force from the West Bank has reinforced the integration of the West Bank’s economy with Israel’s, allowing Israel to incorporate part of the West Bank territories into the Israeli state. Israel rakes in profits on the backs of Palestinian workers in particular, as many of these workers are denied their basic labour rights, including working for more than eight hours, denial of health insurance and pensions, unfair payment and lack of compensation and protection measures, especially given the fact that Palestinians do dangerous jobs, mainly in the fields of construction and agriculture.

Trade unions across the world can play a key role to support the struggle of workers in particular and the Palestinian people at large:

Manal Shqair is a grassroots activist, the international advocacy officer for the Stop the Wall Campaign, Colonized Palestine, and the International Outreach Coordinator of the Land Defence Coalition (LDC).