Lula’s Victory and the Fight Against Fascism in Brazil

October 30, 2022, around 7pm… two words defined the collective feeling expressed by thousands of people on the streets last Sunday: relief and joy! Lula da Silva won Brazil’s presidential election against Jair Bolsonaro, a difference of only 1.8%, or 2.1 million votes.

I remembered the 2014 election, when Dilma Rousseff won by a narrow margin against the social democratic (and neoliberal) candidate Aecio Neves. The right-wing did not accept the result and mobilized in the streets in early 2015. The process that followed is well known: massive demonstrations against corruption and for the impeachment of Dilma Rousseff, eventually achieved in 2016. Among the section of the Brazilian National Congress that voted for impeachment, federal deputy Jair Bolsonaro dedicated his vote to army colonel Brilhante Ustra, one of the bloodiest torturers of the Brazilian military dictatorship. His son, Eduardo Bolsonaro – the liaison between Bolsonaro and the Trump family in the US, as well as the main contact between the Latin American far-right and Steve Bannon – posed with a t-shirt displaying Ustra’s face. Fascism in Brazil gained symbolic, facial, and active representation.

The demonstrations for the impeachment of Rousseff brought to the surface what had long been stored in the cellars of the dictatorship: apology for torture, calls for military intervention, fanciful threats of communism, open hostility toward gender, women, and LGBTQ rights. 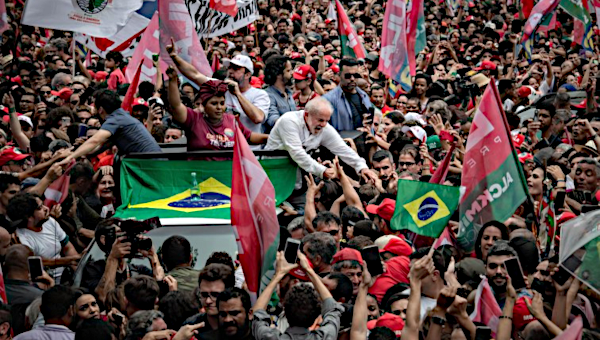 Fascism and Social Crisis in Brazil

Brazil has lived the last four years with a fascist in power. Bolsonaro did not implement a fascist regime or a new dictatorship, but he managed to keep the fascist movement alive and active. “God, homeland, family,” “Brazil above all, God above us all,” “Our flag will never be red” were slogans repeated during and after the election period. Throughout these years, Bolsonaro systematically confronted the judiciary, in particular the Supreme Court. The legislative branch, on which Bolsonaro depended to approve his policies, was coopted through an indirect bribe: the release of funds to members of Congress without any obligation to account for them – the so-called “secret budget.”

Almost 700,000 people died of COVID-19 in Brazil. Aligned to US President Donald Trump, Bolsonaro denied the seriousness of the novel Coronavirus, did not implement a national lockdown, disseminated ineffective drugs and conspiracy theories, discouraged the use of masks, delayed the purchase of vaccines, and discouraged the population from getting vaccinated. But Bolsonaro went beyond this: he made jokes about those who couldn’t breathe as a result of the disease, and said he “wasn’t a mortician” who studied dead bodies. At the most acute moment of the pandemic, he delayed sending oxygen to the city of Manaus, capital of Amazonas, leading hundreds of people to die unnecessarily. This can never be forgotten.

To prevent the widespread chaos that could result from hunger and unemployment, Bolsonaro implemented a social aid program during the pandemic that briefly violated the “spending cap” – a law that froze public spending for 20 years, approved in 2017 during the prior government of Michel Temer. During the electoral process, in addition to the billions of reais destined to members of Congress, Bolsonaro changed the legislation constraining the public budget in favour of a set of concessions aimed at social sectors that support him (truckers, taxi drivers) in order to maintain his social base and minimize the huge social problems generated by his government.

However, Bolsonaro faced an opponent, Lula, who had implemented social programs and comprehensive policies that had improved the lives of the working masses in Brazil. They included a substantial minimum wage increase, popular housing program, expanded access to university, and the direct income transfer program “bolsa familia,” among others. When Lula’s corruption conviction was overturned and he was released from prison in 2019, he was positioned as the only candidate capable of defeating Bolsonaro. Lula prepared for this: at the age of 77, he took care of his health, remarried, rebuilt and expanded alliances from the left to the center-right camps. As his Vice President, Lula chose the former governor of São Paulo, Geraldo Alckmin, a figure of the neoliberal establishment, who had been his opponent in the 2006 presidential election.

Thus, Lula built a “Wide Front” to win the election. The great majority of the left supported Lula. The non-Bolsonarist right-wing launched some minor candidates, of which the most significant name was Simone Tebet, from the center-right MDB party. Tebet actively participated in the investigations against Bolsonaro’s actions during the pandemic. The big corporate media and the traditional bourgeois sectors hoped not to have to choose between Lula and Bolsonaro and sought to push for a “Third Way” through Tebet. However, this did not happen. At the end of the first round of elections, Tebet joined Lula, further widening the front to defeat Bolsonaro.

Despite these alliances with center-right leaders, with neoliberals, and with the left, Lula’s victory was much more difficult than initially expected. Bolsonaro maintained the capacity to mobilize his social base, especially through the Evangelical Pentecostal churches. He did this by invoking a fake threat to them, which he attributed to Lula: “gender ideology,” support for LGBQTI rights, and the closure of churches. Bolsonaro maintained strong support from Brazilian agribusiness, gaining votes in regions that export soybeans and other commodities. His discourse criminalized the landless movement, allowing rapid increases in weapon purchases. He also maintained the support of the small and medium bourgeoisie, self-interested professionals, and those in the retail sector who were particularly affected by the lockdowns imposed by provincial governors and mayors (not Bolsonaro) during the pandemic. On top of this, Bolsonaro had the State machinery (budget, bureaucracy, media, etc.) in his favor, and the permanent spread of fake news through social media. Remarkably, in spite of his enormous errors, he received more votes in 2022 than in 2018.

The wide front around Lula won the election by a very narrow margin, but did not defeat “Bolsonarism.” In the days since Sunday’s election, the fascist forces closed more than 300 roads and highways across the country. They had ample support from the police. As an institution, the police in Brazil form a permanent base of support for Bolsonaro. The Federal Highway Police played an especially active political role. They carried out a series of roadblocks on Election Day, making it difficult for voters to circulate in the regions where Lula was favoured. Agents of the same police murdered a poor black man, Genivaldo, in May 2022 for driving without a license. He was arrested and held in a police van in which tear gas was discharged, and suffocated to death in an improvised “gas chamber.” Fascism is in the daily practice of genocide of black and poor people.

Lula’s Third Term: The Road Ahead for the Left

What does Lula’s victory mean for the socialist left? Here, I return to my initial words: relief and joy… but also apprehension. It was fundamental to win the election, but the electoral victory is only the beginning.

First, Bolsonarism will remain alive and mobilized. Bolsonaro took two days to make a public speech after the election. In his two-minute speech, he did not explicitly acknowledge Lula’s victory, but instead reaffirmed the motto “God, Homeland, Family, and Freedom.” He called on his supporters to unblock roads (that would be the left’s method, he said) and to hold peaceful demonstrations. Until Lula takes office on January 1, Bolsonarism will question the election result with street mobilizations. However, some elements should be considered: there is no international support for a coup in Brazil, as the main powerhouses – USA, Europe and China – have fully supported the electoral process and Lula’s victory; the bourgeois media in Brazil is supporting the electoral result; some of the main entities representing the bourgeoisie, in particular the agribusiness sector, have spoken out against the blocking of the roads; and other popular sectors, among them most of the truck drivers themselves, do not support the coup movement. There is a coup movement underway, led by fascist groups and supported by police officers, but they are not likely to succeed. For us on the left, it is necessary to maintain the mobilization to occupy the streets, when necessary, in defence of democracy and the electoral result. 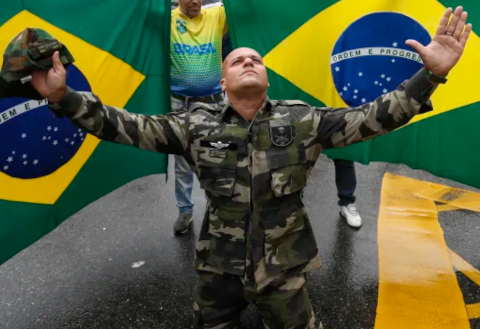 Secondly, we will need to position ourselves in relation to Lula da Silva’s third mandate. The government will be more aligned with neoliberalism than during his 2003-10 reign. He will be compelled to pacify a temporarily-supportive financial, mining, fossil-fuel, construction, and banking elite. He will also seek to win back agribusiness, guaranteeing a range of subsidies and international markets, as he did in previous terms.

Lula did not even promise his own base he would reverse the 2017 labour reform, which weakened workers’ rights. Nor is he expected to undo the Eletrobras power company’s privatization. Lula will be scrutinized, more than ever, regarding public spending. The flexibilization of the ‘spending cap’ law to meet social demands, which is already under discussion, will be limited and time-bound so as to allow Lula to cater to sectors of the bourgeoisie, in particular the financial capital that supports him. In other words, the fight for the creation of jobs, comprehensive social policies expanding rights and guarantees for the working class, investments in universities, in research, science, and technology, in development projects that meet the needs of the dispossessed masses – all of this will confront a program of intense fiscal restraint, exemptions, transfers of public resources to business entities, and reformulation of the role of the state to guarantee the free market, even in the case of fuel prices, which involves the state-owned Petrobras. Lula will be a de facto “Third Way.”

In foreign policy, Lula will return to regional integration, facilitated by left-leaning governments in Argentina, Chile, Colombia, Bolivia, and Peru, even stretching to Mexico. The integration of regional infrastructure could be resumed, though this will need to consider the indigenous rights and environmental struggles which have gained prominence in recent years. Lula intends to revive Brazil’s multilateral leadership role in relation to climate negotiations, the G20 powers, and the World Trade Organization. He will accelerate ratification of a free trade agreement between Mercosur and the European Union, despite the harmful effects this will have on less efficient local producers. Furthermore, he will return to a close relationship with the United States leaders from the Democratic Party (as long as it remains in power), making himself Latin America’s most credible interlocutor. The BRICS and relations with China will again be a priority, particularly because in 2024 Brazil will host both the BRICS and G20 summits, a key moment for Brazil’s visibility in the international arena. In his previous terms, Lula sought a profile as mediator in international conflicts, such as that now underway between Russia and Ukraine – which is not only killing tens of thousands but could also result in nuclear confrontation. If Lula can rescue this role, becoming a mediator (perhaps joined by Turkey or other BRICS countries), he could regain international prestige, which will be advantageous also in his domestic struggles.

There is no doubt that Bolsonaro’s fascist movement will remain alive and active – in the streets, in churches, on social media, though business associations, and in alliances with the international far right and US Trumpist forces. On the left, popular mobilizations, and the neighbourhood committees formed during the campaign to elect Lula and defeat Bolsonaro, must be kept active. These processes of struggle will need – at some point – to build the popular leadership of oppressed black, women, and indigenous constituencies. They must become capable of winning elections and building alternatives to Lula’s compromised rule. The election is over, but the struggles are just beginning. •

Ana Garcia is Professor of International Relations at the Pontifica Universidade Católica do Rio de Janeiro.