The price of electricity has risen astronomically in Europe over the last two years: by four times over the previous year and 10 times over the last two years. The European Union (EU) has claimed that this rise in prices is due to the increase in the price of gas in the international market and Russia not supplying enough gas. This raises the critical question: Why should, for example, the German electricity price rise four times when natural gas contributes around one-seventh of its electricity production? Why does the UK, which generates 40 percent of its electricity from renewables and nuclear plants, and produces half the natural gas it consumes, also see a steep rise in the price of electricity?

All this talk of blaming Russia for the recent increase in gas prices masks the reality that the electricity generators are actually making astronomical windfall profits. The poorer consumers, already pushed to the wall by the pandemic, face a cruel dilemma: With electricity bills likely to make up 20-30 percent of their household budget during winter, should they buy food or keep their houses warm? 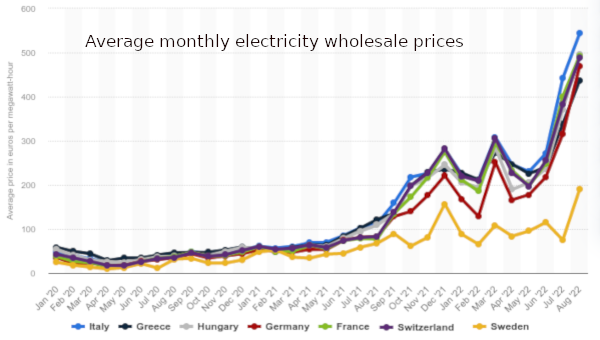 Privatization and Marginal Price of Electricity

This was part of Augusto Pinochet’s electricity sector reforms that he introduced in Chile during his military dictatorship there from 1973 to 1990. The guru of these Pinochet reforms was Milton Friedman, who was assisted by his Chicago Boys. The principle that electricity price should be based on its “marginal price” even became a part of Pinochet’s 1980 constitution in Chile. The Chilean reforms led to the privatization of the country’s electricity sector, which was the objective of initiating these reforms.

It was the Chilean model that Margaret Thatcher copied in the UK, which then the EU copied. The UK dismantled its Central Electricity Generating Board (CEGB) that ran its entire electricity infrastructure: generation, transmission, and bulk distribution. This move also helped the UK shift away from domestic coal for its thermal power plants, breaking the powerful coal miners’ union. These were also the Enron market ‘reforms’ in California, leading to the summer meltdown of its grid in 2000-2001.

The European Union banked heavily on natural gas as its preferred fuel to bring down its greenhouse gas emissions; it also ramped up renewables – solar and wind power – and phased out lignite and coal. The EU has imposed a series of sanctions on Russia, made public its plans to impose further sanctions on the country, and seized about €300-billion of Russia’s reserves lying in EU banks. The EU has also said that it will cut down on Russia’s oil and gas supplies. Not surprisingly, Russia has sharply reduced its gas supplies to the EU. If the West thought it could weaponize its financial power, why did it think that Russia would not retaliate by doing the same with its gas supplies to the EU?

Due to the Russian supplies of natural gas to Western Europe falling, the price of liquefied natural gas (LNG) has risen sharply in the international market. Worse, there is simply not enough LNG available in the market to replace the gas that Russia supplied to the EU through its pipelines.

With the price of gas rising by four to six times in the last few months, the price of electricity has also risen sharply. But as only a fraction of the electricity is powered by gas, all other sources of energy – wind, solar, nuclear, hydro, and even dirty coal-fired plants – are making a killing. It is only now that the EU and the UK are discussing how to address the burden of high electricity prices on consumers and the windfall profits made by the electricity generators during this period.

It is not only the EU and UK consumers who are badly hit. It is also the European and British industries. Stainless steel, fertilizer, glass making, aluminum, cement, and engineering industries are all sensitive to input costs. As a result, all these industries are at risk of shutting down in the EU and the UK.

Former Greek Finance Minister Yanis Varoufakis in his article “Time to Blow Up Electricity Markets” writes, “The European Union’s power sector is a good example of what market fundamentalism has done to electricity networks the world over… It’s time to wind down the simulated electricity markets.” The rest of the world would do well not to follow the EU’s example.

Why then is Indian Prime Minister Narendra Modi’s central government rushing into this abyss? Did it not learn from last year’s experience when, after a coal shortage, the prices in the electricity spot market went up to Rs 20 ($0.25) per unit before public outcry saw it capped at Rs 12 ($0.15)? So why push again for these bankrupt policies of market fundamentalism in the guise of electricity reforms? Who will benefit from these market reforms? Certainly, neither the consumers nor the Indian state governments, which bear the major burden of subsidizing electricity prices for their consumers. •