The Ontario Financial Accountability Office (FAO) says that, with inflation, real wages in the public sector will decline 11.3% over the three year period 2021/2 – 2023/4.

This would radically deepen the trend toward lower wages during the last ten years. The FAO reports that since 2011, the average annual salary for the Ontario public sector employees (defined here as employees of schools, colleges, provincial government, provincial agencies, and hospitals) has increased by $10,385 – or 1.6 per cent on average annually. This is the lowest increase of all the sectors and lower than inflation, which averaged 1.8 per cent per year. Over the ten years that would be about a 2% pay cut. 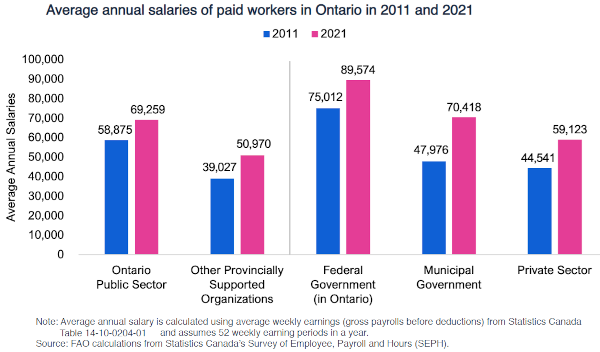 The FAO reports that wage settlements were the lowest in the provincial public sector over the last decade. 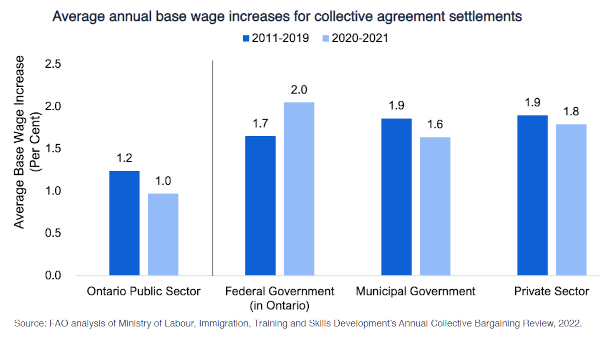 Hospital Wages Especially Challenged: The FAO predicts hospital wages will increase even less than in the public sector – just 1.2% annually over the five year period 2021-22 to 2026-27 compared with 1.7% in the public sector. Both are well below inflation. Far from solving the staffing shortages choking the hospital system, this will make hospital work much less attractive as an employment option.

Employment Growth: Going forward, the FAO estimates that the Province&’s total spending on salaries and wages for Ontario public sector employees will reach $56.9-billion by 2026-27, representing an average annual growth rate of 3.4 per cent over the five-year period. This is the increase in total public sector wages based on both wage and employment growth. The FAO estimate of 3.4% projects that employment will grow 1.7% annually and that nominal wage rates will also increase 1.7% annually.

The report says there are 655k employees in this sector and a further 521k in “provincially supported” organizations such as universities, childcare centres, children’s aid societies, and LTC. This excludes municipal and federal government employees, but encompasses the entire provincial broader public sector (BPS) – 1.176 million employees. This is about 18.5% of all employees in Ontario.

Broader Public Sector Employment Growth: To maintain services and meet government policy goals, The FAO suggests employment would need to grow by 2026/27 in the BPS group by 138,669 – 11.8%.

The FAO says there will need to be a growth of 56,974 employees by 2026-27 to maintain services in the “public sector.” This would be an increase of 8.7% for the 655k employees in hospitals, schools, colleges, and provincial government. This 57k increase “is in addition to the immediate challenges caused by high job vacancy rates.”

This “public sector” group excludes 521k LTC, university, childcare, CAS and other BPS workers that the report refers to as “provincially supported.” Due to government program commitments in LTC, homecare, and childcare, the FAO says an additional 81,695 employees will have to be added to the 521k employees at provincially supported employers. This is an even higher increase than in the public sector – fully 15.7%.

The Cost of Wage Increases: Building on FAO figures, this BPS group has a total wage of $72-billion and a total wage and wage related compensation of $87-billion (assuming 21% for wage related benefits). Every one percent increase in BPS wages therefore increases annual costs by $870-million. Compare this with the $31-billion increase in provincial revenues over the budget plan last year alone.

Hospital Employment Must Grow Faster: Notably, the FAO projects higher than average growth in the hospital sector: hospital employment will increase by 28,362 from 2021/22 to 2026/27 – or by 2.3% per year. That is an increase of 5,672 employee per year. This is based on the province’s plan to add 1,300 beds and the belief that that the employment to bed ratio will return to pre-pandemic levels by 2026/7. With the Ontario Hospital Association putting annual staff turnover at just under 15%, hospitals will have to hire about 45,000 staff per year, based on these figures, at least until they find a way to reduce turnover rates.

However it is not so clear that this estimate will deal with reducing the currently very high level of hospital staff vacancies, or sufficiently deal with pressures arising from aging, population growth, COVID, and long-COVID. I very much doubt it. It certainly will not deal with under-capacity – 1,300 beds is only about an increase of 4% over 5 years – that won’t even keep up with population growth.

Non-Union May Lose Out: The FAO costed the impact of Bill 124 (legislation limiting compensation increases to 1%) in the public sector and estimated that it will save the Province a cumulative total of $9.7-billion in salaries and wages costs. If the Bill is overturned by the courts however the costs to the province may be significantly less. With no union to help them collectively push their interests, the FAO is rightly dubious that the 18% non-unionized public sector employees will get anything.

Do public sector workers have to accept lower wages? While the FAO reports suggest public sector workers (and, by extension, employees of “provincially supported” employers) face the threat of perhaps the greatest decrease in living standards for many decades, the report also suggests that they do have some leverage.

The report echoes popular concerns about healthcare staff shortages: “Vacancy rates, or the number of vacant jobs as a share of total jobs (occupied and vacant), have risen across most public and private sector job categories. In the Ontario Public Sector, this challenge is most pronounced in the health sector, where the vacancy rate has nearly doubled since 2019.”

When considering “risks” to its modest wage projections, the FAO flags staffing and vacancies in healthcare:

“Vacancy rates, or the number of vacant jobs as a share of total jobs (occupied and vacant), have risen across most public and private sector job categories, including for positions in the Ontario Public Sector and other provincially supported organizations. This suggests that the Province will have difficulty staffing existing positions and hiring to meet new program commitments. This challenge is most pronounced in the health sector across all job categories. For example, in the second quarter of 2022, almost nine out of every 100 jobs were vacant in nursing and residential care, for a total of 16,315 vacancies, which was more than double the 4.0 per cent vacancy rate from 2019. In other healthcare, which includes homecare, clinics and doctors’ offices, there were 11,775 job vacancies in the second quarter of 2022, with a job vacancy rate of 5.5 per cent, double the 2.7 per cent job vacancy rate in 2019. Lastly, there were 16,020 job vacancies in hospitals in the second quarter of 2022. Since 2019, the hospitals job vacancy rate has increased from 3.4 per cent to 5.8 per cent.”

The FAO states, “the Province may still need to increase wages beyond the assumptions in the FAO’s base case projection to ensure sufficient staffing to maintain existing public services and meet program expansion commitments.” •