What African Governments Must Fight for at COP27

We the African People:

In solidarity, stand as women, men, youth, peasants, social movements, community- based and civil society organisations as a united front against the multi-dimensional crisis that is prevailing in our continent.

Noting the frequency and intensity of climate crises in Africa that have brought us together in our diversity, we speak with one voice to call to the African and global leaders to take the matters of climate change seriously and ensure that climate justice is delivered urgently.

Being Aware that African leaders and other world leaders are preparing to gather again for the 27th edition of the Conference of Party (COP) event, we the African people have taken stock of the commitments to COP26 and previous COPs and the extent to which they were delivered.

Acknowledging that this COP27 is going to be held on African soil, it is of great importance that African voices are heard and our concerns and recommendations are taken on board.

Rejecting any attempts to brand COP27 as an African COP if it does not recognise the voices of African people in their diversity and push for agreements that draw closer to making climate justice expectations a reality. 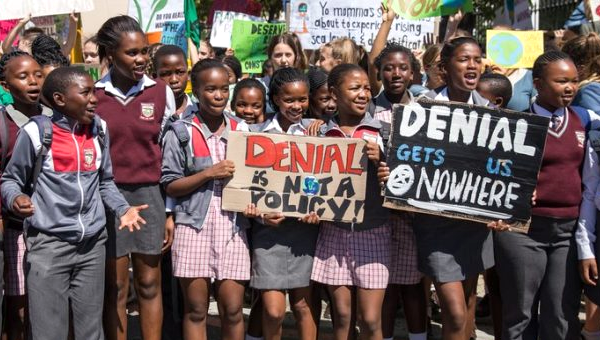 Therefore, cognizant of the current effects of the climate crisis in Africa and the world:

Climate Change remains Africa’s biggest “existential challenge.”1 We are already experiencing the effects of the climate crisis, as evidenced by the February 2022 Cyclone Batsirai in Madagascar which was followed by heavy storms, which left the number of displaced people at around 150 000 and 1.64 million people facing severe food insecurity compounding the effects of the worst drought in 40 years in other parts of the country. The April 2022 ‘Durban Rain Bomb’ also caused flooding across KwaZulu Natal in South Africa, during which 450 people lost their lives, 40,000 were displaced and 12,000 homes completely destroyed.2 In 2019 cyclone Idai left more than 960 people dead, thousands missing and affected nearly 3 million people in Mozambique, Zimbabwe and Malawi3 and was followed by 4 more cyclones within a two year period. Dust storms are wreaking havoc in the Sahel region.4

All this is negatively impacting food security and causing biodiversity loss in Africa and millions of people are experiencing extreme hunger and are in need of food handouts across the continent. Peasant farmers of which the majority are women, produce the majority of local food, feeding African homes – nearly 80% of total food consumed by Africans. They also rely mostly on rain-fed agriculture and other natural products available in their territories for their livelihoods. They (peasant farmers) are mostly affected by the effects of climate change in rural economies. Peasant women are also responsible for energy and water provision for their families and communities and are main caregivers for the sick, making the multiple roles burdensome in times of crisis. The climate crisis is leading Africa to become a net food importer resulting in food prices going beyond the reach of ordinary people, while in many cases undercutting local markets.

Climate change and resource-induced conflicts and environmental disasters not only in the African region but throughout the world continue unabated and hundreds of thousands of families have been heavily affected in 2022 alone. As extreme weather events have worsened, insecurity has fed the insurgence of armed conflict in fragile regions such as along the Niger Delta, Chad basin, the horn of Africa, the DRC basin and the Amazon (timber logging by multinational companies) where weak institutions and economies, injustice, violence and social insecurity are already prevalent.

Currently, unprecedented heatwaves are sweeping across the world, bringing wildfires and killing thousands. Europe is facing its worst drought in 500 years whilst recent Monsoon floods have affected Pakistan (Asia) since mid-June 20225 that has left a third of the country under water. Caribbean Islands are under threat of extinction due to the rise in sea levels. In China, a record-breaking heatwave combined with a prolonged drought during the usual flood season has wreaked havoc affecting hydropower capacity and future food supply.6 All these effects are being experienced amidst low climate adaptation capacity in the global South.

Natural resources misgovernance through extractivism – the large-scale plunder of our resources for profit and to meet the overconsumption of elites in the Global North and South – has resulted in increased poverty and maldevelopment amongst communities and nations and is a driver of the climate and ecological crisis. Industrial agriculture, forestry and fishing and a reckless promotion of these and other false solutions are pushing Africa to the brink of destruction. Ironically there is a new push for fossil fuel investments in Africa amidst the Ukraine-Russia conflict. This has worsened climate injustice in the world as the Global North is pushing poor Global South countries to invest in fossil fuels such as the $400-billion (US) gas pipeline to run from Nigeria Niger-Delta region to Europe.7 This is regardless of the fact that the same Global North is calling for a phase-down of fossil fuel investment by nations in fear of increased GHG emissions. Tragically, Africa is the least emitter at less than 4% of global emissions, yet it is paying the ultimate price from climate shocks and disasters.

Growing evidence shows that gas exploitation in Africa will not bring long-term economic benefits to the continent. The only short-term winners will be European countries looking for alternative Russian gas supplies, as well as oil and gas transnational corporations looking to make huge profits. The world’s biggest oil and gas companies are planning 195 gigantic oil and gas projects called “Carbon Bombs,” including in Africa, that would drive the climate past internationally agreed temperature limits. The carbon bombs will produce 646 billion tonnes of carbon dioxide (GtCO2) emissions, exceeding the global carbon budget of 500 GtCO2. Carbon emissions have no borders, increases in one country will impact us all.8 We need to be transitioning to renewables. Renewables that are decentralised and women and community-led are cheaper and safer and have co-benefits for the environment and socially. This is a no-brainer in Africa where most of the continent is not locked into dirty energy.

The aggressive promotion of ‘green’ hydrogen is a dangerous and dirty distraction especially when it is derived from natural gas and other fossil fuels. The massive investments and infrastructure which are partly subsidised by our own states, are intended to serve the Global North, with little to no benefits of increased energy access in our own territories. We stand to expose, discredit and discourage and halt all forms of hydrogen gas exploration and production.

Acknowledging: The Global Climate Summits continue to fail us!

As COP27 brings focus to Africa and its climate vulnerability as well as non-commitment by the global north on its UNFCCC pledges, the ‘just transition’ narrative is finally being recognised by governments (after years of community struggles and articulations). We are, however, equally experiencing a stronger push by industry entrenching dirty energy colonialism even further. The recently proposed African Union’s “African Position on Energy Access and Transition,” if adopted by Heads of States, could deepen an oppressive regime throughout Africa. It will destroy efforts to bolster equality, open democracy, the inclusion of people’s voices, and gender justice and crush hopes of a fossil fuel-free energy future for the people of Africa as well as the global 2050 mitigation ambitions.

The increasing interest in dirty energy resources throughout the region does not resonate with the commitments which came out of COP26. Expansion of fossil fuel operations in South Africa (SA), the exploration of oil and gas in Zimbabwe and Ivory Coast, exploitation of offshore oil and gas reserves in Nigeria, and gas operations in Mozambique and interests in the DRC,910 not to mention the resuscitation of coal use in Europe to cover the gap created by the war in Ukraine,1112 are just examples of the lip service that has been given on reducing reliance on the dirty fossil fuel.

Small-scale food producers in Africa, especially female rural farmers, continue to push back against injustices emanating from poor policy structures and the destruction of sustainable food systems in the advent of climate change. The current food narrative and climate change discourse is captured by international corporations and does not reflect the peasant voices, especially women farmers despite them being the most impacted by climate change. Climate change and current industrial food systems are damaging the ecosystem and creating social inequalities. As a Continent, there is no better time than now to demand food sovereignty, which includes a sustainable food system grounded in agroecology, territorial markets and peasant rights. Now is the time to claim our right to culturally appropriate food that is produced through ecologically sound and sustainable methods. Small-scale food producers and consumers must have.

False solutions such as chemical recycling, plastic/waste incineration, carbon markets, carbon offsetting, geoengineering, net zero, etc in various African countries financed by the Global North are further pushing us deeper into the climate emergency and vulnerable communities at the frontlines with no sources of defense to experiences of the devastating impacts of climate change. Small-scale food producers and consumers must have a say in how food is produced, processed, marketed and consumed. We say NO to food being used to control the People of the World.

THEREFORE: We are calling on our African Delegation to COP27 – to push for the following outcomes

The Africa Climate Justice Collective (ACJC) is a group of African civil society organizations, movements of women, peasant communities, African citizens and more, that are fighting for climate justice, and standing in solidarity with the people of the world, especially those in the front lines of the impacts of the climate crisis.