The WTO and Vaccinations: Greed and Profits Win

The UNAIDS Executive Director Winnie Byanyima had appealed before the 12th WTO Ministerial Conference in Geneva that the world would face a grim future if patent waivers did not take place. At a press conference, Byanyima had said, “In a pandemic, sharing technology is life or death, and we are choosing death.” During the 12th Ministerial of the World Trade Organization (WTO), which took place from June 12 to 17, the rich countries did precisely that. They blocked almost all possibilities of providing cheap vaccines, antiviral drugs and diagnostics to the world.

After two years of the WTO “postponing” – or blocking – the India-South Africa proposal for a waiver on patents for COVID-19 vaccines and medicines, the club of the rich countries – the European Union, the United States and the UK – ensured that no worthwhile patent waiver measure was passed. The profits of Big Pharma once again trumped the lives and health of the people. This is also what happened during the AIDS epidemic. 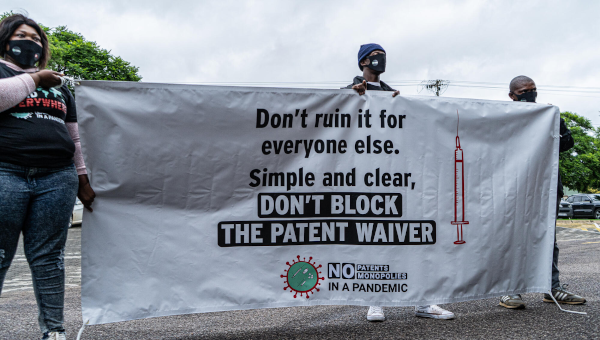 In vaccine manufacture, it is not the formula of the vaccine that matters. Unlike many medicines, which are small molecule drugs and therefore easy to patent, vaccines are large molecules and belong to the group of medicines that are called biologics. The key to manufacturing biologics is not the formula of the compound but rather manufacturing it at an industrial scale and ensuring the production process of replicating the complex large molecules accurately. This know-how is guarded not under patents but under trade secrets. It is possible to duplicate these trade secrets or secure them by giving somebody who knows the process the job. But this opens companies that try to do this to costly legal action, including by the WTO. And there is also the threat of unilateral sanctions by the United States, the EU and the UK.

The upshot is that Pfizer and other Big Pharma companies will continue to make huge profits at the expense of people’s lives, even if this leads to new SARS-CoV-2 variants emerging and causes the continuation of the pandemic. Less than 20 percent of people in Africa, which has a population of about 700 million, have been fully vaccinated, while millions of vaccine doses are going unused and are going to waste in the United States. We have the vaccine production capacity to immunize the entire global population, thus saving countless lives and reducing the possibility of new, dangerous variants emerging. But doing so is not in the interest of Big Pharma, for whom profits matter far more than human lives.

Just to put it in perspective, Pfizer’s profits roughly doubled in 2021 from 2020, with the Pfizer-BioNTech vaccine contributing to a significant part of those profits. If Pfizer were a country, its earnings of $81-billion last year would have placed it ahead of the GDP of countries such as Ethiopia, Ghana and Kenya, according to an analysis of World Bank data by the organization Global Justice Now. Apart from vaccines, the monopoly over diagnostics and antiviral drugs also pushes up the costs for the people constantly battling the virus, while generating windfall profits for Big Pharma.

The only waiver in the MC12 was on compulsory licenses for vaccines. It did not address patents on diagnostics and antiviral drugs. It also did not address the other issue that had been raised that the WTO includes in its waiver other intellectual property rights such as trade secrets, which are essential to the mass production of vaccines.

The MC12 kicked the ball six months down the line on making a decision about doing away with patents for diagnostics and antiviral drugs, with very little chance that the rich countries would have a sudden change of heart on these issues, considering their continued stance on these matters over the course of the pandemic that has already killed millions.

Immunize All or Allow New Variants

Why is immunizing the global population important? Simply put, the more people that SARS-CoV-2 (the virus that causes COVID-19) infects, the more the chance of new variants emerging. There is a misguided belief among some people that the more the virus mutates, the more benign it is likely to become. This used to be a common opinion among a section of the medical community. However, today evolutionary biologists hold that there is no evidence that viruses mutate to become more benign. And even if it is held to be true in the long run, as John Maynard Keynes, the economist, put it, “In the long run, we are all dead.”

The longer we live with a pandemic that continues to infect around half a million to a million people every day, the more we are dicing with the possibility of a new variant emerging that can be as transmissible as omicron and can also lead to larger case fatalities than we have seen before. The transmissibility of the virus is maximum when the infected patient has only mild symptoms, is physically and socially mobile, and can therefore infect others. This is the window in which the virus spreads. Whether the patient subsequently recovers or dies has little impact on the replication of the disease in other people the patient might have infected. It may have an impact on our social behavior, but that has little to do with the virus becoming more benign with time.

Over time, people do tend to generate more immunity to the virus, but that is what then drives the future evolutionary path of the virus. If delta showed higher transmissibility, then omicron has a much higher immune escape. This means that omicron can bypass our immunity derived from earlier infections or vaccines. Of course, if the evolution of the virus leads to the patient being so sick right from the beginning that the person cannot move around at all, that will halt or lower the transmission of the virus. But that is not how the SARS-CoV-2 virus behaves.

How is SARS-CoV-2 likely to evolve over the next few years? As immunologists tell us, the evolutionary trajectory of the virus depends on the complex interplay of a number of factors that shape the response of our immune system to the evolution of the virus.

Waiting for the virus to turn more benign or a mythical herd immunity cannot be an answer to the current pandemic. The vaccines are crucial to any public health response to the pandemic as countries across the world fight to cut down the number of new infections and, therefore, the roots of new transmissions. And yes, for the foreseeable future, we will have to live with repeating our vaccine booster doses as we fine-tune the vaccines to newer variants.

While the patents on antiviral drugs as a cure for COVID-19 are important, and they will certainly help to cut down the deaths and complications of long COVID, again, patents come in the way of their use. The antiviral drugs are effective only within a small window of the first few days of the disease, which means that they have to be made available cheaply for the people so that they can buy them from a pharmacy. The high cost and the control over the patents of these drugs do not provide a large enough market. A small market and high prices lead to a Catch-22 situation: the prices are high because the market is small; the market is small since the prices are high.

Again, open licensing of the antiviral drugs might make it possible to create a large market for them. But this is what the WTO does not allow. The route of compulsory licensing under the WTO is cumbersome, and its relaxation in the MC12 means that countries like India, which were crucial in fighting the AIDS epidemic, are supposed to opt out as suppliers. They then cannot become antiviral suppliers for COVID-19 as they had been for AIDS antiviral drugs.

Why don’t countries that have the capacity to manufacture advanced vaccines – India, China, Russia and South Africa – come together to offer technology and supplies to the rest of the world? Why don’t countries collaborate with Cuba, a biologic powerhouse, to produce vaccines locally? Cuba has developed five such vaccines, two of which are already under large-scale production.

The answer lies in the “rules-based international order” propagated by the club of the rich. The rules include sanctions on many countries, including Russia, Cuba and China. For those not yet under sanctions, there is the threat of future sanctions by the United States, the EU and the UK – the gang of three that teamed up in the WTO to defeat the India-South Africa patent waiver initiative. The United States also has its domestic law, the US Trade Act, Section 301, for “protecting” its intellectual property under which it threatens countries with US sanctions. India and China figure prominently every year in the list of countries whose laws and actions do not conform to US domestic laws. If the United States and its allies do not win in the WTO, they then use their “rules-based order” where they get to make the rules.

Welcome to our brave new world, where, to paraphrase Winnie Byanyima, death triumphs over life. •