In Sri Lanka’s Crisis, A New President and Old Problems

Sri Lanka has a new president. On 20th July, parliament in accordance with the Constitution elected by clear majority the acting president and former prime minister Ranil Wickremesinghe. He succeeds Gotabaya Rajapaksa, who was forced to vacate the presidency on 9th July and flee abroad, after resisting months of demands for his resignation in the public backlash to the island’s worsening economic crisis.

Wickremesinghe had been the pundit’s favourite in what began as a four-horse race, since the majority party in parliament – the Sri Lanka Podujana Party (SLPP–People’s Front) of the Rajapaksa clan – declared in his favour. Hostility to his nomination from within the SLPP, smaller parties once aligned to it, and opposition parties, echoing the sentiments of substantial opinion within the unstructured protest movement, proved inadequate.

This result confirms the lack of public legitimacy of the 225-member parliament, expressed in the slogan of the Janatha Aragalaya (‘People’s Struggle’): “No to the 225!” The ineffectiveness of parliamentarians to arrest and address the breakdown of the economy and provide solutions to the people’s needs had in any case damaged trust and confidence in it. Ranil Wickremesinghe’s election is the last nail in the coffin. It fuels further political instability. The pressure for an early general election to choose new legislators will now grow. 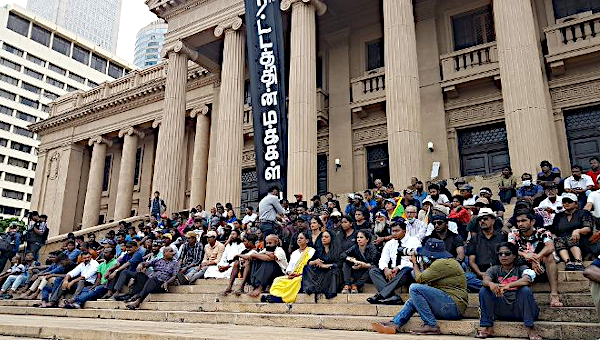 Alongside the Rajapaksas, whose maladministration, nepotism and kleptocracy are now blamed by the ethnic majority Sinhala populace for Sri Lanka’s bankruptcy, Wickremesinghe has no popular mandate. His United National Party (UNP), an affiliate of the International Democratic Union that includes the Conservative Party, was wiped off the electoral map in 2020. It secured one seat through proportional representation. His surprise appointment as prime minister in May, was rightly seen as a deal within the political elite to safeguard the Gotabaya Rajapaksa administration in return for a share in state power

As Wickremesinghe now assumes office as president, Sri Lanka is under a state of emergency that he proclaimed on 18th July. This suspension of democratic rights vests greater powers in him, including use of the military to clamp down on public protests. Already, a court order has been established to begin removing people who have besieged the president’s office in a continuous protest (‘GotaGoGama’) since early April, providing a rallying point to the movement across the island.

Meanwhile, big business, the upper middle class and mainstream media are already calling for the Aragalaya to wind up. It has accomplished their goal of reining in the Rajapaksas and securing a neoliberal in the highest office of state. The new president and the coalition government he will form in the coming days, should in their view now be allowed to stabilise the turbulent political order, as a precondition for economic stability.

The unlikely vehicle for such stability is the International Monetary Fund (IMF). The multilateral agency is expected to provide a funding line to a state whose coffers are empty – usable foreign exchange reserves are around $250-million (US), which is under four days equivalent of imports – and that has nowhere left to borrow from.

Sri Lanka has lost access to the international capital markets through which it accumulated almost half of its US$51 billion external debt. Its sovereign credit rating was downgraded even further following a default on debt repayments in April. China, an important new lender in the Rajapaksa era, has held back on new credit during the crisis. India stepped in with bridging finance for imports of fuel and fertiliser, but this too is now exhausted.

This will be Sri Lanka’s 17th agreement with the IMF since 1965. In the decades in between, the country’s reliance on foreign loans and stock of debt has only increased sharply. Exhausted by the daily struggle of finding transport to move around for want of petrol and diesel; the scarcity of medicines (80% are imported) and cooking gas; the lack of forex to finance inputs in manufacturing, agriculture and services; and soaring food prices accompanied by shortfalls in domestic production; inflation spiking at 60% and wages trailing far behind; the consensus across social classes is that an IMF ‘bail-out’ will somehow rescue the economy.

In anticipation of the IMF’s structural adjustment conditionalities, the government had already increased the pump price for fuel by 300% and abandoned consumers to price-fixing by the cartels that supply the staple food, rice, as well as milk powder and sugar among other basic commodities. Once other reforms begin rolling out, including reduction of the state sector payroll – one in seven of the work force – rollback of public expenditure, user fees in education and health (that are free of charge though under-resourced), and ‘targeting’ of social programmes, the burden on the poor and lower middle class will only become more unbearable.

The election of the new president and evidence of his majority in parliament, along with the achievement of the initial objective of the protest movement to throw out the former president, will likely see some fall in support and intensity of public protest.

However, the co-dependence between Ranil Wickremesinghe and the Rajapaksas is a liability to both. There is no guarantee that the new cabinet of ministers he cobbles together will last long, as everyone schemes to minimise their culpability for what is a structural crisis of dependent capitalism and secure their political future in an upcoming general election.

On the streets and in social media, the activists of the Aragalaya have vowed to maintain their opposition to the Wickremesinghe-led government, including the ongoing occupation of the entrance and grounds of the president’s office and other sites in public places across the island. Their campaign for reduction in the executive powers of the all-powerful presidency will continue, pending constitutional change that abolishes these in toto. The democratic consciousness of the movement is high. There are novel demands for right of recall of elected representatives and the right to have referendums on matters of national importance.

While the largely Sinhala people’s movement has yet to confront the gross violation of human rights during Sri Lanka’s 26-year internal war and reckon with the demands of the Tamil nation for justice for war crimes, truth over the disappeared, and for internal self-determination, this difficult dialogue has begun among its most conscious elements. Already its most recent demands include the release of Tamils in long-term detention and for an end to racism, including the rampant post-war Islamaphobia directed at the ethno-religious Muslim minority. Whatever challenges are ahead, the gains of this moment and movement must be defended. •

This article first published on the Labour Hub website. 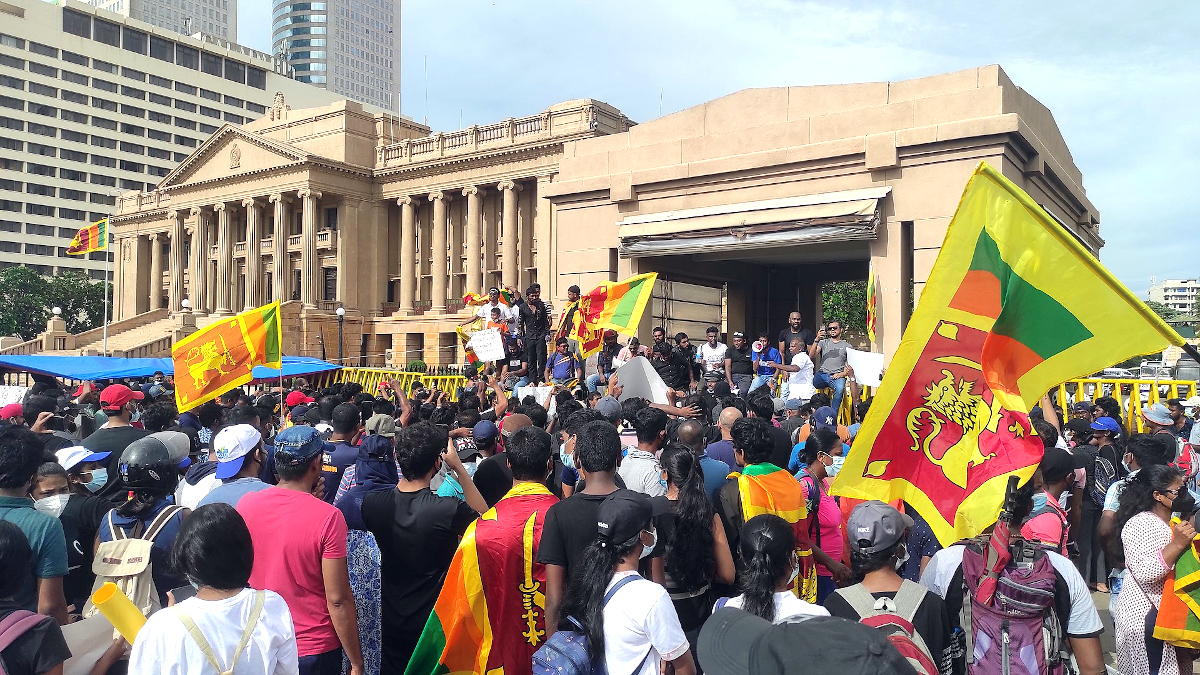 Ranil Resign! Stop the Repression! Solidarity with the Aragalaya!

The Samajawadi Janatha Sansadaya (Socialist Peoples’ Forum) condemns the violence unleashed on peaceful protestors at ‘GotaGoGama’ adjacent to the Presidential Secretariat in Colombo, in the early hours of Friday 22nd July.

Two thousand military and police cordoned off access roads to the site, and proceeded to destroy tents sheltering protestors, assaulting those in their way, including journalists who were recording the aggression, and abducting several individuals identified as leading activists.

This heinous anti-democratic action was perpetrated by President Ranil Wickremesinghe within hours of his assumption of office on 21st July, following the ouster of Gotabaya Rajapaksa in massive public demonstrations and occupations.

In fact on the 21st the diverse groups represented at ‘GotaGoGama’ announced their withdrawal from occupation of the Presidential Secretariat as of 2pm on the 22nd; while vowing to continue the Aragalaya (‘Struggle’) by other means.

This senseless action by Ranil Wickremesinghe, who is also Minister of Defence, is intended to entrench his authority within the militarised state. It also aims to secure his standing among the parliamentarians of the Rajapaksa family, Sri Lanka Podujana Peramuna (SLPP—People’s Front), who are wounded and smarting from their political setbacks and the counter-violence across Sri Lanka against their homes and other properties on May 9th in reaction to SLPP thugs attacked ‘GotaGoGama’.

Ranil Wickremesinghe is President today thanks entirely to his backing by the Rajapaksas. The electorate rejected his party and himself in 2020, netting one seat through total number of votes cast nationally. His ascent from opposition parliamentarian to prime minister and now president is an outcome of a broken and corrupt political system.

We urge international solidarity for the release of those in custody and with the demands of the Aragalaya for Ranil Wickremesinghe’s resignation; lifting of emergency law; abolition of the executive powers of the presidency; early general elections; democratisation of the political system and constitutional renewal; and economic relief for the masses.

The Aragalaya has always been larger than ‘GotaGoGama’. It must now regroup. The decentralisation of resistance through neighbourhood councils as in Sudan’s democratic revolution, will make it more difficult to repress. Its demand for a national Peoples’ Council as an alternative to the disgraced Parliament, reminding the dominated majority that power belongs to them, is another step.

Victory to the Peoples’ Struggle! • 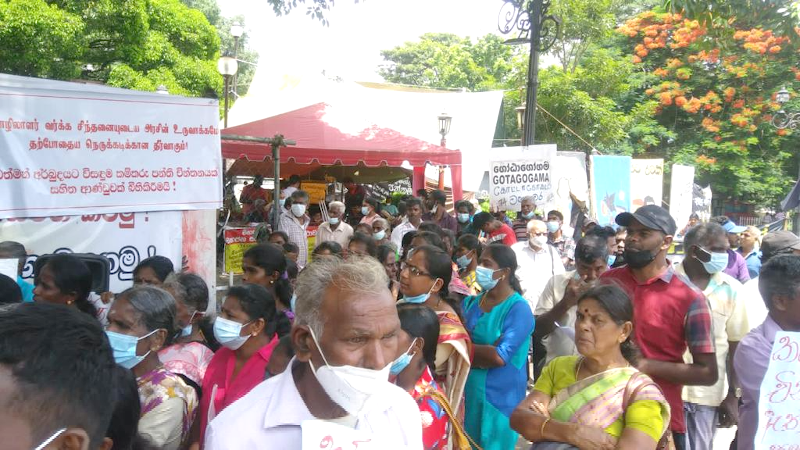 The Sri Lankan nation is facing the worst financial, economic, and socio-political crisis in 74 years since independence.

The entire world is aware of the extreme economic, financial, social, and political turmoil that the citizens and working people of Sri Lanka are going through and the extreme difficulties they are facing.

Following the resignation letters from the President and the Prime Minister, it is possible to begin the process of the formation of an interim government. This interim government, in order to actually and truly represent the people of Sri Lanka, needs to bear some truths in mind:

We demand that the interim government pay attention to the rights of workers, and the toil, efforts, and labour of the workers and farmers of Sri Lanka. We need a government that is worker, farmer, and women friendly; one that safeguards the rights of these crucial sections of the people of Sri Lanka to revive the economy. Only then can we have a stable and a really representative government in our country, Sri Lanka. •

This article first published on the SSA Lanka website.

Balasingham Skanthakumar is with the Social Scientists Association in Sri Lanka. In the early 1990s, he was the first black students officer at the School of Oriental and African Studies, London. His publications include "Labour's lost agency," Himal Southasian, March 2015; Pathways of the Left in Sri Lanka (co-editor), EISD, Colombo 2014; and "Growth with Inequality: Neoliberal Authoritarianism in Sri Lanka," LST Review, 2013. He can be contacted via email at skanthakumarb@gmail.com