Do Nothing by Halves That Can be Done by Quarters: Federal Budget 2022

A consistent theme in the media, when writing about healthcare in Canada, is to use disparaging adjectives, such as ‘dilapidated,’ ‘ramshackled,’ ‘exhausted.’ They are not exaggerations. The main thing we know is that healthcare here underperforms, and does not meet current needs, a fact distressingly visible during the disasters of the COVID-19 pandemic.

The Liberal government Federal Budget 2022 does too little to begin the path toward reversing the deterioration of the healthcare sector, despite the one-time $2-billion (from 2021-22 expenditures) to deal with surgical backlogs and an increase in transfer payments to provinces for healthcare. In certain crucial areas it does nothing.

The most shocking deficiency revealed by the pandemic was the poor performance in Long-Term Care (LTC), where Canada had the highest fatality rates among rich countries. This deficiency relates to a systemic problem of underfunding, over-crowding, inadequate staffing, and the prominence of the private sector in care delivery. The Liberal election platform promised to deal with this issue by committing $6.7-billion to improve the quality and availability of LTC homes and beds. There was no move toward this at all in this budget. The problems in LTC require time and a federal national strategy to begin improving things. 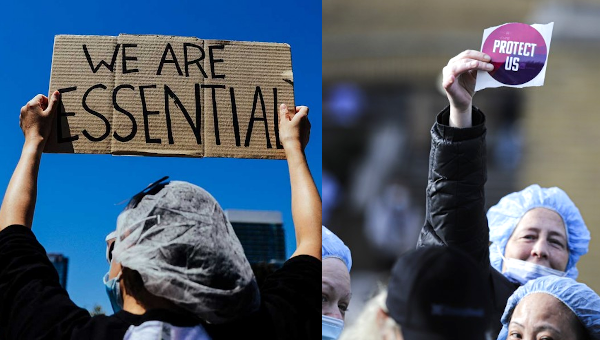 Where’s the Plan for Long-Term Care?

You’d think that terrible experience of deaths in LTC would not so soon be ignored, but it was ignored in the budget. Considering that it takes years for things to happen – to examine the problem and put in place a program, after lengthy consultations with provinces – the very least that could be done is to provide a budget line to plan for a LTC program with some sense of costs in the future.

Dealing with chronic and severe labour shortages is the other mostly ignored aspect of the public health system. Not having a doctor or nurse practitioner is common for too many throughout the country, the long-existing nurse shortage has grown to a critical stage, and other healthcare workers are still too poorly paid to attract and retain these desperately needed trained workers.

Job vacancy figures (4th quarter 2021) indicate that shortages in healthcare are very high with huge increases over job vacancies in pre-pandemic 2019. The most unfulfilled positions are for nurse aides, orderlies and patient service associates (20,500 vacancies up 81% over two years) and for registered nurses and registered psychiatric nurses (23,000 vacancies up 117%). The job vacancies for licensed practical nurses, at 10,800 had the largest increases (190%) over the two-year period.

There is a nudge in the budget toward dealing with labour shortages in a section titled ‘Creating Good Middle Class Jobs,’ but again, the measures are, for the most part, too little and too slow to begin to meet the vast problems in the healthcare sector. The fixes for labour rely mostly on providing some monetary incentives to encourage specific groups of doctors and nurses to work in remote hard-to-serve areas, improving the recognition of immigrant’s credentials, and encouraging the hiring of more temporary foreign workers.

The monetary incentives focus on expanding student grants, and forgiving a portion of student loans for certain health professionals if they work in underserved rural or remote communities. Nurses could receive up to $30,000 and doctors up to $60,000 in this loan forgiveness program. The main problem with this is that it is the kind of incentive that will take a very long time to have much of an effect, considering the outsized demand for this labour in urban areas.

An important step in creating more health professionals will be through using the talents of people who are already in this country, but who earned their degrees in other parts of the world. Enlarging the Foreign Credential Recognition Program is a good idea, especially because it intends to standardized national exams, provide easier access to information, and ensure faster timelines. This could bring as many as 11,000 trained workers into the system each year for five years, an important change that is long overdue.

Expanding the Temporary Foreign Workers (TFW) program is a big part of the plan for providing labour in the short term. It is a program that has become important for keeping wages in check in specific sectors. The new initiatives are not necessarily targeted toward healthcare sectors, nor is it likely that the new expansion will solve some of the more serious problems of the poor conditions of too many TFWs. According to the budget, the new measures are intended to “increase protections for workers, to reduce administrative burdens for trusted repeat employers, and to ensure employers can quickly bring in workers to fill short-term labour market gaps.”

However, over 90% of the total of $156.7-million budgeted over three years is designed to make things easier primarily for employers. This is through the Trusted Employers Model, a program to expedite things for employers who frequently hire foreign workers; through a special attempt to increase government capacity to process employer applications; and through creating a new foreign labour program for agriculture and fish processing. Only 9% of the new money will go toward making ‘improvements to the quality of employer inspections and hold employers accountable for the treatment of workers.”

The failure of comprehensive planning for labour, especially labour in the care sector, is especially serious considering the known aging of the population. But it also may indicate the lack of commitment to the expansion of the healthcare sector to deal with the enormous deficiencies in LTC, homecare, mental health, and the opioid crisis. All of these sectors now suffer not just from inadequate funding, but also from severe shortages of trained workers.

This government has moved on crucial care issues, primarily on childcare and it has outlined the initial stages of the dental plan. What is needed now, is a clearly defined plan so that we can all understand what to expect in the future. It is time to see a vision for making the care sector one that meets Canadian needs. We cannot go through many more years of shabby treatment of people in LTC, inadequate focus on the opioid crisis, and without a national program for mental health. We also need to know how the promised national programs can be developed.

In the minority parliament, there is in place a Confidence and Supply agreement to move on developing some of these programs. But as this budget shows, when and if these programs will happen and how much will be spent on them is entirely unclear. Let’s see the plan, so there can be some confidence they will actually materialize. After the 50 year experience with promising childcare before it happened, the public should be given a good idea of when and how current promises will be kept. •

Marjorie Griffin Cohen is an economist and Professor Emeritus at Simon Fraser University. She is one of the founders of The Care Economy.ca.