In Ontario, the real Gross Domestic Product (GDP) per capita hit its historic high in 2019. According to Randy Robinson, Ontario Director for the Canadian Centre for Policy Alternatives, there is more money in the province than when Ontario created Medicare, built the 400 series highways or set up the community college system. Robinson says, “Ontario’s economic foundation is strong and yet, we continue to spend far less on public services than other provinces do.”

As a province, on a per capita basis, Ontario has the lowest healthcare funding. Ontario also has the lowest hospital funding, fewest hospital beds and fewest nurses. According to Robinson, “When it comes to program spending, Ontario spends $2,000 less per person per year than the average of the other provinces.” With 15 million people living in Ontario, that means the Doug Ford government would need to spend an additional $30-billion each year just to be average.

Robinson maintains this lack of spending has nothing to do with the economy which is strong. Instead, he says, “We are simply not making the fiscal effort to fund public services.” 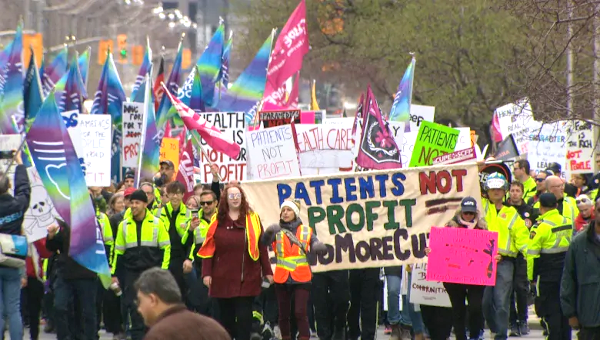 COVID had a relatively minuscule effect on the Ontario budget, largely due to a federal government injection of $145-billion into pandemic-related supports in Ontario. According to the Minister of Finance, the provincial debt to GDP ratio is at pre-COVID levels. Currently, revenues are $19.5-billion higher than the government estimated a year ago.

This means money could be pouring into public services. However, according to the Financial Accountability Office (FAO), program spending is not on track to keep up with inflation or population growth or the reality of an aging population that requires more healthcare. The provincial government’s own budgets and updates confirm these facts.

Knowing the strength of Ontario’s financial situation, one would hope Health Minister Christine Elliott was experiencing cognitive dissonance when she announced Feb. 1 that the provincial government intends to bring in independent health facilities to operate private hospitals in Ontario. This is the first step to privatizing public healthcare services across Ontario.

When the pandemic hit and the federal government provided abundant infusions of funds, this threw Ford’s plans off course. Unfortunately, at the end of the day, the Conservatives simply delayed privatization implementation.

During the summer of 2020, the Conservatives passed a health privatization bill for homecare rescinding most of the existing homecare legislation. Instead, it set up the structure for privatization and removed all legislative hurdles to privatizing the last public parts of homecare.

Michael Hurley, President of Ontario Council of Hospital Unions and Regional Vice-President (ON) for Canadian Union of Public Employees (CUPE), recently shared the average death rates in private, for-profit facilities was 5.7 per cent. In not for-profits, the rate was 2.8 per cent. Municipal facilities had the lowest death rates at 1.4 per cent. That is not surprising given the drive to lower costs and reap more profits in private, for-profit long-term care facilities.

It’s also a reflection on the treatment of workers⁠ – many of whom are racialized women trying to get citizenship. The lowest wages are paid in private, for-profit homes and the goal is to make it into a municipal facility where pay is higher and staff-to-resident ratios are better.

Hurley points out, “There is an incestuous relationship between the Progressive Conservative party and the for-profit operators in long-term care. The Bill Davis’, and the Mike Harris’ and the Ernie Eves’, all go on to head up, hold senior positions, derive millions in personal wealth from their relationship.”

Private hospitals also have some of the highest death rates when compared with public facilities. Profits of 10 to 15 per cent combined with taxable status and punctuated with paying larger salaries to managers and corporations cannot happen without negatively impacting patient care and outcomes.

The profit driven system comes at a great cost to quality of care and quality of life for both patients as well as workers. In 2021, the Ford government accelerated the move from providing vaccinations through public health and hospital nurses to private for-profit pharmacies. It should be noted that the Liberals, under Kathleen Wynne, opened this door when they let pharmacists administer flu shots.

Over the past few months, COVID-19 testing has been privatized while at the same time severely limiting public access to COVID tests. According to Mehra, “They are now allowing private COVID testing clinics to brazenly violate the Canada Health Act and charging patients up to $400 per test. In the midst of a pandemic no less.”

The most recent announcement included a plan to privatize hospital services including surgeries and diagnostics. This was proposed under the guise of helping with the backlog of diagnostics and surgeries caused by years of austerity, under funding, and backroom deals.

The reality is, private hospitals are banned in Ontario under the Private Hospitals Act that was introduced in 1971 and went into effect in 1973. The act grandfathered in existing private hospitals but made them illegal going forward.

However, approximately 25 are surgical and diagnostic clinics. Elliott’s announcement confirmed these facilities could operate as private for-profit hospitals under cover of clearing backlogs.

With all of the gaslighting that is going on, it’s important to remember that it was years of austerity and the downsizing of public hospitals that caused these backlogs.

Going into the pandemic every large hospital had operating rooms closed for weeks or months or even permanently because of a dearth of funds to run them.

Fund Public Healthcare for All

The public system has ample capacity to handle the backlog of diagnostics and surgeries if Ford would provide the funding rather than diverting it from the public system to fund private for-profit clinics.

Increased staffing would also help. That one’s a no brainer. Instead of eliminating the annual license plate sticker fees, take that $1-billion and hire 11,958 new nurses. And, just to ensure the nurses answer the call, put an end to Bill 124 which caps wage increases at 1 per cent total compensation for three years.

The Conservatives should also raise the wages of Personal Support Workers (PSW) to a living wage and draft a Bill ensuring those working part-time hours, often for more than one employer, receive benefits commensurate with hours worked. These changes would go along way to ending the exodus from this essential part of the public healthcare system.

In June 2021, the FAO announced the 2021 budget put the province on track to reduce overall program spending by $1,281 per person by the end of the decade. That will create a gap of close to $18-billion between expenditures and the revenue needed to maintain services at current [below average] levels.

An update in November 2021 put the shortfall at more than $3-billion over the next two years alone. This number did not account for inflation. Be assured, healthcare austerity and privatization will undoubtably ramp up if the Conservatives are re-elected in June. •