The Erasure of Palestine and the JNF

Ariel Gold’s article on the Jewish National Fund (JNF) in Counterpunch is an important and critical introduction to this NGO but she mistakenly dates the compilation of the Zionist Village Files to the 1940s. She cites the historian Ilan Pappé but he wrote that the files were almost complete in the 1930s. The Village Files were compiled in association with the JNF and contained detailed information about every Palestinian village and every inhabitant in preparation for the expulsion and execution of all Palestinians then living within the borders of the British mandate. This accurate dating is important because it indicates that this was planned before the Holocaust when [non-Zionist] Jewish and Arab people had lived together peacefully for centuries.

The JNF is a case study of misrepresentations and fabrications to rationalize and justify profound immorality. There is a great deal of critical history documenting that antisemitism is not inevitable, intrinsic, or constant in history. Zionism arose out of late 19th century white European nationalism, and its founder Theodor Herzl wrote extensively in his diaries and letters that he aspired to create a “new Jew” modelled on American cowboys and aristocratic Prussian soldiers. Herzl was grandiose and saw himself as a messiah to his people (Loewenberg p.108ff; Bresheeth-Zabner).

The 1948 UN approval of Israel’s statehood legally sealed ethnic cleansing as an internal matter. In her work on unlearning imperialism, Ariella Aisha Azoulay traces Israel’s sleight of hand just as the Universal Declaration of Human Rights was drafted, just as negotiators were told of the expulsions and massacres of Palestinians. Ralph Bunche, the US delegate, “demanded that the committee address ‘this concrete case of human rights violation [rather] than … spend hours debating human rights in the abstract’ but his proposal was summarily dismissed, and the committee continued its work” [p. 475]. The discrepancy between what needs to urgently stop and endless talking just continues. 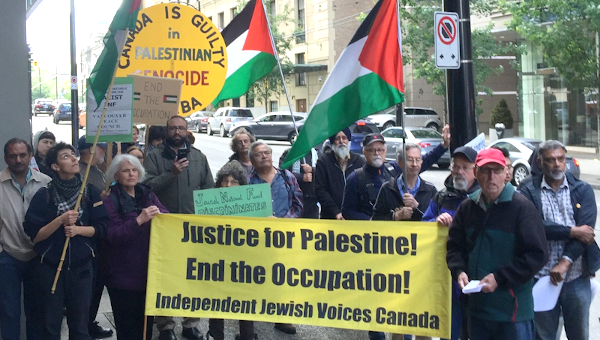 A transparent example of JNF’s actual values is its celebratory fundraiser in Toronto right after 2014 Operation Protective Edge, Israel’s 51-day massacre of Gazans causing over 550 Palestinian child deaths and one Israeli child death. The keynote speaker was Shaul Mofaz, often called a war criminal, and described by Israeli journalist Gideon Levy as follows: “Mofaz was also one of our crueler defense ministers – no less than 1,705 Palestinians were killed on his watch, including 372 children and teens and 191 targeted killings: that is no great honor, either. True, those were the days of the second intifada, but Mofaz was also one of the fathers of the doctrine of targeted killings…”

Mofaz orders led to 70 deaths a day in the second intifada. Mofaz also justified the Hannibal Directive, ordering the sacrifice of kidnapped Israeli soldiers over bargaining a prisoner exchange [p. 176]. The Toronto JNF fundraiser showed a clip about the JNF donation during the 2014 war to a Jewish children’s playground so Jewish children could have normal fun during the hard days of war. Not a word about the 550+ Palestinian children being killed. The film showed how the JNF was funding rest and relaxation for the soldiers during the war, with young women serving them cold drinks in the hot desert.

On its internet home page, the JNF describes “working to advance the principles of harmony between people and their environment in the world.” The JNF is “Israel’s largest green organization and the oldest green organization in the world. KKL-JNF advances water management, forestry & environment, education & technology, community development & security, tourism and recreation, and R&D in Israel.” It ensures “a thriving Negev and Galilee preserving our natural and cultural heritage cooperating in environmental issues for a viable tomorrow.”

In 2010 Chomsky wrote: “The most extreme departure from minimal democratic principles has been the complex array of laws and bureaucratic arrangements designed to vest control of over 90% of the land in the hands of the Jewish National Fund, recognized by the Government of Israel and the World Zionist Organization as the exclusive instrument for the development of Israel’s lands, restricted to Jewish use, in perpetuity, and barred to non-Jewish labor (though the principle has often been ignored for imported cheap labor” [p. 158].

Edward Said wrote that “an impressive series of laws legally assimilated huge tracts of Arab land… Israel was able to prohibit non-Jews from purchase or lease of 93% of pre-1967 Israel territory” [p.154]. In a recent case, despite incontrovertible evidence of their residence and of robust methods of farming in the Bedouin Negev, Israeli Judge Dovrat ruled that the al-‘Uqbi family did not have legitimate land claims in al-‘Araqib because “There was no agriculture and no remnants [of Arab habitation] until the end of WWI, ‘none, none, none,’ as if shouting Bedouin agriculture away would make it disappear as a historical fact” (Weizman, p. 268).

Ilan Pappé writes that “the true mission of the JNF, in other words, has been to conceal these visible remnants of Palestine not only by the trees it has planted over them, but also by the narratives it has created to deny their existence…” [pp. 228-29]. The chilling erasure of massacres and expulsion at JNF picnic sites, represented as “Wonderful recreation for all types of people.” Ayn al-Zaytoun, where many Palestinians were massacred in 1948, was renamed Ein Zeitun. “It harbors large picnic tables and ample parking for the disabled… the parking lot has biological toilets and playgrounds. Next to the parking lot, a memorial stands in memory of the soldiers who fell in the Six Day War.” In ‘Operation ‘Broom’, soldiers were ordered to “search-and-execute… thirty-seven teenagers were picked at random and shot with their hands tied behind their backs while the rest of the villagers were forced into the storage room of the village mosque. Many bodies of women, children and babies were found near the local mosque.” Estimates are that seventy to several hundred people were executed at this recreation site (Pappé, pp. 112-13).

JNF Australia similarly erases Palestinians from history. The Sderot Resilience Centre assists Jewish Israeli children living with ADHD. “Animal-assisted therapy is an important tool in helping to improve a patient’s social, emotional, or cognitive functioning. Our Israeli brothers and sisters living on the border with Gaza are facing a wave of extreme terrorism. Sirens at night wake terrified children as they hear the sounds of the Iron Dome shooting down deadly missiles. Flammable balloons and incendiary kites drop on farmlands, destroying crops and livelihoods of the surrounding community members. Every week mobs gather on the Gaza border with chants of death and destruction to Israel and the Jewish people… From 2005 to 2014, these attacks have killed 27 Israeli civilians, 5 foreign nationals, 5 IDF soldiers, and at least 11 Palestinians.”

Between 2005 and 2014, the IDF has attacked Gaza in four operations, using prohibited and unconventional weapons indiscriminately bombing the trapped, civilian population under strict siege in 2006, 2008-9, 2012, and 2014. According to B‘Tselem estimates, the IDF killed 4293 people including 1068 children in this period.

The JNF and the Military Today

The JNF entry on “multicultural coexistence” depicts the removal of Bedouin into ‘concentration townships’ as a civilizing mission. “Arab society has been undergoing considerable change, demographically and in terms of family status and the status of women. These changes have been influenced by trends of modernization – including those of Israeli society – and are expressed in an increase in living standards and life expectancy, a reduction in births per family, and a decrease in infant mortality.”

Chomsky writes that Bedouin are “forcefully evacuated from their homes to areas where they are to be concentrated, terrorizing women and children, shooting animals, destroying tents, and in general behaving in the manner that has typified the bloody and brutal career of [Ariel Sharon]” (Chomsky, p 106). From the research group Forensic Architecture comes this observation of Bedouin displacement: Bedouins were displaced into ‘concentration townships’ “to make space for the construction of the Ariel Sharon City of Training Bases – with accommodation for one hundred thousand military personnel… soldiers stationed in the Negev.”

Subsequently, Israeli prisons that were built in places from which Bedouins were displaced are referred to as ‘desert Siberia’ where “the military runs a number of little-regulated, out-of-sight detention camps… defined by human rights groups as ‘illegal and inhuman’” (Weizman p.259). The use of incarceration has recently been “expanded into the world’s largest constellation of detention centers for sub-Saharan asylum seekers… in violation of international conventions on refugees.” The greening of this desert has actually intensified desertification and aridity as dark forests absorb more solar radiation than reflective desert sands. The consequent droughts have tied together people living on opposite shores of the Sahara. Migrants compelled to journey north have ended up incarcerated in this prison system. Israel approves fewer than 1% refugee applications (Weizman, pp. 244-50). 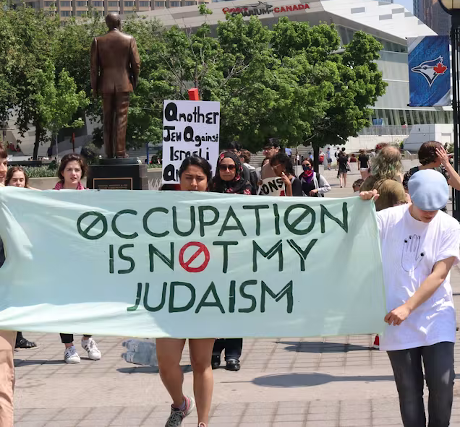 The JNF and Israel 2040 plan supported aims to settle 1.5 million Israelis in the Negev and Galilee over the next two decades in conjunction with the Israeli military. The Negev will be the center of Israel’s weapons industry and of technological innovation. One focus is educating youth from UNIT 8200 in cyber surveillance and warfare technology. Based in London, the JNF UK poses as independent of the JNF in Jerusalem and allies with far-right groups to educate youth for these roles.

The Erasure of Palestine and Palestinians

Campaigns against the JNF have focused on removing its charitable status, but a just released report, “A Progressive Jewish Response to the Discriminatory Polices of the KKL-JNF,” clarifies that the JNF relies very little on charitable donations. In Israel there are legal suits against the JNF for corruption, mismanagement, and secrecy. These efforts are complicated by the fact that the JNF also owns and works through more than a dozen subsidiaries. The report warns of a recent shift in Israel’s land registration procedures that would lead to hundreds, if not thousands, of evictions in the West Bank and in East Jerusalem.

Effectiveness in challenging such a dominating, blatantly unjust world order must be measured against the loss of lives. Much effort has focused on defeating the International Holocaust Remembrance Alliance (IHRA) definition of antisemitism which seeks to criminalize criticism of Israel. But these efforts have not limited or affected state-supported killing, use of non-conventional weapons and collective punishment, imprisonment, torture, and child imprisonment. Nor have they stopped the everyday practices of discrimination through the displacement of Palestinians, provision of vaccines to Palestinians, provision of water and power infrastructure, or the dismantling of nuclear weapons. Does the crime of apartheid address the severity and urgency of Israeli practice? Since the 1948 UN Universal Declaration of Human Rights and the 1948 Israeli statehood, Israeli poet Aharon Shabtai’s poem has summed up the inability to stop the killing: “J’Accuse.” •