The members of LeftEast collective are aghast at the violent military aggression that has escalated into war in Ukraine. It threatens to cast our region into bloodshed of a scale that has not been seen in decades. We unequivocally condemn the Kremlin’s criminal invasion and call for the withdrawal of Russian troops back to the international border. While we do not forget the responsibility the US, NATO, and its allies bear for bringing about this war, the clear aggressor in the current situation is the Russian political and economic elite.

Our efforts should be to expose Russia’s inexcusable imperialist invasion of Ukraine, to which NATO’s aggressive expansion and the Ukrainian post-Maidan regime also paved the way. In the revolutionary spirit and in solidarity with the peoples of Ukraine, Russia, and the region, we say “No!” to Moscow today and “No!” to the false choice between Moscow and NATO in the future. We call for an immediate ceasefire and return to the negotiating table. The interests of global capital and its military machines are not worth one more drop of the peoples’ blood. Peace, land, and bread!

We reject the oligarchic capitalism, authoritarian neoliberalism, and regional anti-communism cultivated by global anti-communist forces, that have brought us to this place. As Putin himself threatened in his “history speech” on February 21: “Do you want decommunization? Well, that suits us just fine. But it is unnecessary, as they say, to stop halfway. We are ready to show you what real decommunization means for Ukraine.” Today’s attack by the Kremlin represents decommunization going all the way. A small number of right-wing politicians is sure to profiteer, but for most of us, extreme nationalism and far-right ideologies can bring nothing but suffering and a spiraling cycle of hatred. Economically, this anti-communism has brought us the oligarchic capitalism – and poverty – that we see in Russia, Ukraine, and the whole of Eastern Europe. Politically, it has brought us governments that barely pretend to represent their populations. 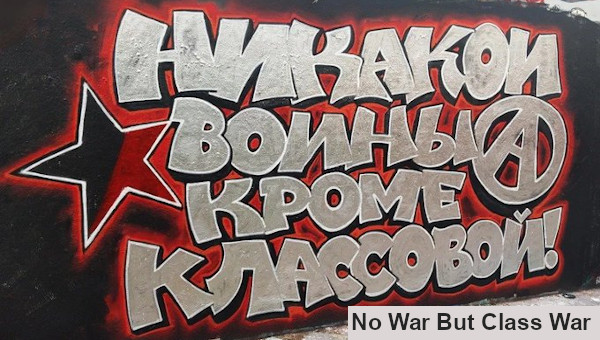 We state firmly that:

(1) We hold the Kremlin responsible for this immediate act of war! The Russian state has invaded Ukraine in the name of an utterly reactionary imperial nostalgia and in explicit revolt against the internationalist solidarity exemplified by past and present revolutionary movements in Eastern Europe. Putin’s “Great Russia” nationalism is a criminal and futile attempt to jockey for international standing by denying the rich cultural diversity of Eastern Europe. We stand together with all ethnic communities of the region and uphold the vision of peaceful solidarity through struggle for a better world for all.

(2) Although we hold the Kremlin to be the initiator of this war and the main aggressor today, we bear in mind the responsibility borne by the United States, many of its allies, and transnational capital for the dire situation. Their refusal to negotiate with Russia over its concerns about the expansion of NATO fanned the flames of war, even against calls by many, including the Ukrainian government, for de-escalation. In the wake of the pandemic, economic and political elites in the US and other advanced capitalist states hoped to distract the people from their failing democratic legitimacy and the economic hegemony of Euroatlantic “integration.” They pushed for the jump-starting of capital accumulation, all very much at the expense of people in Eastern Europe. War-hungry antagonist and latter-day imperialist Putin is now using the dire post-socialist and pandemic-related crisis of social reproduction in Russia and Ukraine alike to ignite nationalist sentiment, and profiteer from and (re)produce old ethnonationalist conflicts. Exploitative and expansionist Euroatlantic “integration” has now become an authoritarian’s casus belli: it has come to full-blown war in Ukraine.

(3) We reject regional anti-communism, ironically embodied by Putin and his promise of “decommunization” despite the wolf-in-sheep’s-clothing solidarity he receives from parts of the Left and all liberal projections of Putin as “communist,” while his government marginalizes and brutalizes the Russian Left opposition, and antifascist, anarchist and antiwar movements. But also, and crucially, we reject anti-social regimes based on oligarchic capitalism that nurture nationalism and far-right ideologies in Russia, Ukraine, and the petty opportunistic regimes in Eastern Europe, combining militaristic right-wing rhetoric and profiteering from others’ misfortune.

(4) We reject the so-called “decommunization laws and reforms” in both Russia and Ukraine in the last few years. The two “enemy-sides,” Russia and USA/NATO, are imperialist and capitalist forces that have followed the path of authoritarian anticommunist neoliberalism. This shared path, upon which Ukraine also walks, is, among other things, testified to by neoliberal labor laws, land “reforms” aiming at preventing access to land, dispossession of small farmers, and economic/social policy reforms in the last years, which have made people extremely vulnerable to exploitation and risks of poverty, resulting in unprecedented socioeconomic crisis in both Russia and Ukraine but not only there – as it has a regional and global impact.

(5) Unlike current glorification of the Ukrainian government as a fully democratic bearer of freedom, we question Ukraine’s post-Maidan regime: its repression of the Left and the opposition, the banning of major opposition parties and blocking popular opposition media; the discriminatory language policies and lack of any wish to recognize and accept Ukraine’s political, ethnic and cultural diversity, and its sabotage of the Minsk accords for the last seven years. Ukraine’s extreme “decommunization” reforms also makes it clear that we cannot simply wish for a return to yesterday’s unsustainable situation.

(6) We reject campist solutions that seek salvation in a racist and militarist Euro-Atlantic unity or a revanchist Eurasianism, instead of supporting genuine struggles for radical social change, democracy, workers’ power, inclusiveness, and liberation.

(7) In the face of these reactionary ideologies which augur nothing but blood, poverty, and division, we uphold the legacy of the revolutionary movements of Eastern Europe, in whose (many) tradition(s) we critically pursue the struggle against capitalism, imperialism, and militarism and the promise of religious, ethnic, and gender equality. This struggle in solidarity with all workers and those oppressed in our region is the only hope for a better future for ethnic Ukrainians and Russians as well as the historically oppressed groups of the region – Roma, Jewish, Tatar, and migrant communities, women and sexual minorities. In this spirit we proclaim our solidarity with political prisoners in Ukraine and Russia and our support for the movement for radical anticapitalist democracy and its forces in both countries.

We demand immediate ceasefire, antiwar efforts that will affect the economic and political elite but not the workers and peoples of the affected countries, and negotiations that take stock of past mistakes in the peace process and social and economic policies that brought our region to war. We stand in solidarity with the anticapitalist and anti-war movements in Ukraine and Russia. We hold no illusions about the promises of liberal democracy. No war but class war!

We ask comrades in countries not yet affected by war to press their governments to ensure full, humane reception of refugees from Ukraine and all other conflict zones, to demand the charting of a swift course to peace, and to express their solidarity with those whose lives are affected by aggression and jingoism. We have a history of left internationalism and pacifism to guide us. •

This article first published on the Left East website.

LeftEast is a place where various voices, efforts and groups from around the region, broadly understood, come together in a sustained analytical and political effort. Ideologically, it is explicitly left-wing in orientation, that is, left of the classical social democracy. lefteast.org.