The US Congress is completely divided, Republicans versus Democrats. Except when it comes to the military. Bills for working people can’t be passed. But there’s always money for the generals and the arms-makers.

Last week the US Congress passed and President Joseph Biden signed the military spending bill for 2022 at a cost of $768-billion, $24-billion more than requested! The bill pays for ships, submarines, aircraft, and all sorts of weapons, as well as the pay for military personnel. The House passed it earlier in December by a vote of 363-70 and it cleared the Senate 89-10. The no-votes came from more progressive Democrats who generally wish to limit military spending.

Among specific provisions of the bill are $28-billion for nuclear weapons programs, $7.1-billion to strengthen positions against China, and $4-billion for the European Deterrence Initiative to resist Russia, which at the moment seems prepared to invade Ukraine. 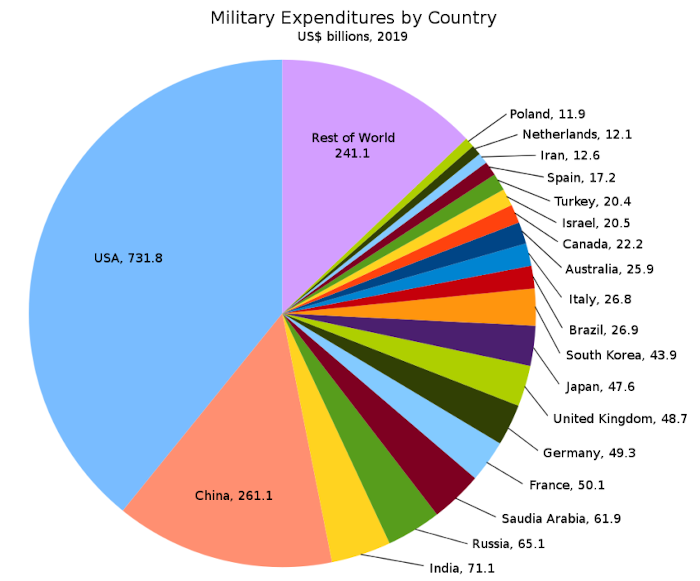 The National Defense Authorization Act (NDAA) also contained some element of reform. For example, calling upon the military to root out extremism after 38 of the 250 people charged for the January 6 insurrection turned out to have served in the military. It also made some reforms in the system of military justice because of the 20,500 cases of “unwanted sexual assault” (including anything from groping to rape) reported in 2018. The act did not, however, repeal the Iraq War resolution of 2002, used by Trump to assassinate Iranian military officer Qasem Soleimani in January of 2020.

In general, the NDAA budgets are driven by the military commanders and by military contractors who stand to profit from the manufacture of war material. These military contractors contribute generously to the political campaigns of the politicians, a total of $47,149,042 in 2020. The biggest contributor, Lockheed Martin, which manufactures aircraft, gave $5,983,592, 47 percent to Democrats and 53 percent to Republicans. Only the banks contribute more to politicians.

“Many of my colleagues tell the American people, day after day, how deeply concerned they are about the deficit and the national debt. They tell us that we just don’t have enough money to expand Medicare, guarantee paid family and medical leave, and address the climate crisis to the degree that we should if we want to protect the well-being of future generations. Yet, tomorrow, the US Senate will be voting on an annual defense budget that costs $778-billion – $37-billion more than President Trump’s last defense budget and $25-billion more than what President Biden requested… As a nation, we need to get our priorities right. I will vote ‘NO’ on the National Defense Authorization Act.”

Before the bill passed, Congresswoman Alexandria Ocasio-Cortez made a number of specific amendments to deny funds to various governments: the specific Saudi unit that murdered Jamal Khashoggi, to a specific weapons contract for Israel, to countries that engaged in genocide or war crimes, to Colombia’s unit that suppresses civilian protests. Her amendments failed, and she voted no on the bill.

Shortly after the latest US military budget was adopted, the New York Times published a study of military records regarding civilian casualties in Iraq, Afghanistan, and Syria. While the military claims to engage in “pin-point bombing” with “surgical precision,” many civilians, including children has been killed. The Times wrote, “According to the military’s count, 1,417 civilians have died in airstrikes in the campaign against ISIS in Iraq and Syria; since 2018 in Afghanistan, US air operations have killed at least 188 civilians. But The Times found that the civilian death toll was significantly higher.” Thousands more civilians than the military has accounted for may have been killed.

Still in Congress, no representative takes the historic socialist position of not a penny for militarism and war. •

This article was written for L’Anticapitaliste the weekly newspaper of the New Anticapitalist Party (NPA) of France, and published in English at New Politics.