High School Students Walk Out: Saying Yes to Palestine Solidarity and No to TDSB

Let’s give credit to the roughly 200 brave students who walked out of Marc Garneau Collegiate Institute last month. They were protesting how the Toronto District School Board (TDSB) has handled what it considers to be antisemitism within its schools.

They were fed up with the way their Board – supposed to represent them – puts the brakes on statements, information or discussions that might offend some members of the Jewish community in Toronto who regard certain criticism of Israel as anti-Semitic. As I mentioned in an article a month ago, the Board has simply adopted the Friends of Simon Wiesenthal Centre (FSWC) website as its own when it comes to setting out rules for what is and what is not antisemitic in TDSB schools.

TDSB Student Equity Program adviser Javier Davila apparently overstepped the rules, when he sent information to teachers about Palestinian treatment at the hands of the Israeli government and military as Israeli warplanes bombarded Gaza back in May. The Jewish organization B’Nai Brith went after him, calling for his dismissal from the Board and when that didn’t happen, took a complaint to the Ontario College of Teachers (OCT).

Writer Desmond Cole ignored the rules back in September when he was hired by the Board to speak about anti-Black racism, calling for a “Free Palestine,” something which the FSWC says “is a dog whistle for the destruction of Israel.” The TDSB responded quickly, placing a “brief pause on speakers for professional learning,” according to Board media officer, Ryan Bird.

As the students wrote in a press release, “these instances of censorship galvanized the student protest.” They organized it themselves, not wanting to put supportive teachers in jeopardy. They came to school on Friday November 12, wearing keffiyehs and the green, white, red and black colours of the Palestinian flag and left their classrooms en masse at 11 am. 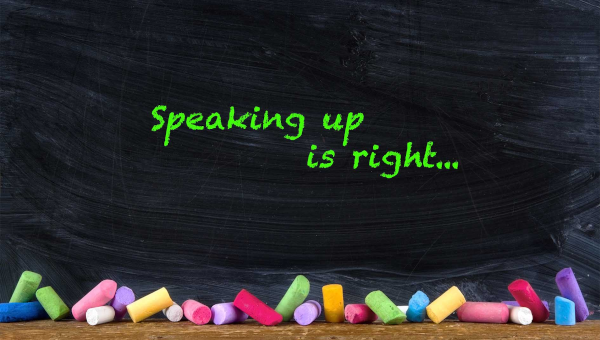 Their list of demands is reproduced below, but what makes it so noteworthy is its simple call for respect, equity and good education. It calls on the Board to have the backs of students and staff who might face “backlash, unfair accusations and ill-treatment for expressing their cultural identity.” The students demand that Palestinian voices are heard in discussions of human rights and equity education. The TDSB, they said, must change its current definition of antisemitism based on the International Holocaust Remembrance Alliance (IHRA). Independent Jewish Voices of Canada (IJV) describes that definition as “deeply flawed” – its primary purpose to stifle legitimate criticism of state Israel.

Instead, they said, the TDSB must align its human rights stance with those of international agencies like the Human Rights Watch, Amnesty International and the United Nations which consider human rights to be inherent and based on individual dignity, freedom, equality and access among many others – as rights that limit rather than preserve the power of the state.

Most important, the students’ manifesto calls for the Board to educate: “assure TDSB educators and students that they can discuss Palestine, its history, culture, traditions and resilience.” They want learning – unhampered by some political notion of correctness driven by fear of offending influential groups. They want information – contentious, messy and uncomfortable as it may be.

Friends of Simon Wiesenthal Centre and the Centre for Israel and Jewish Affairs (CIJA) got right on the case, predictably calling the protest another anti-Semitic incident at the TDSB creating a “climate of hate for Jewish staff and students” . The thorn in their side comes from the phrase used by the students and many others, “From the River to the Sea, Palestine Will Be Free.” They say this calls for the establishment of a state of Palestine from the Jordan River to the Mediterranean Sea and therefore the elimination of Israel and its people. This of course is CIJA’s and the Friends of Simon Wiesenthal Centre’s assumption, not others’. According to Seraj Assi’s 2018 article in the Israeli newspaper Haaretz the term comes from negotiations by early Zionists looking to define the boundaries of the essential homeland or “Eretz Israel.” In light of Israeli occupation and expansion of settlements, the call taken up by Palestinians, is an expression of hope: “The tragedy is” he writes, “that, from river to sea, only one people is free.”

Corey Balsam, National Co-ordinator of Independent Jewish Voices Canada pointed out in an email that the groups above along with B’Nai Brith are among the main pro-Israel lobbyists in Canada:

“FSWC materials frequently vilify Palestinians and advocates for Palestinian human rights, aggressively defending Israel and casting its critics as simple anti-Semites, even as organizations like Human Rights Watch make the case that Israel is committing the international crimes of apartheid and persecution against Palestinians. Canadian students need genuine antiracist and human rights education, including about the Holocaust and other injustices, not propaganda to defend a foreign nation-state from legitimate critique.”

There is certainly a chill caused by all of this animosity. Muslim community members are worried about it. The students involved in the protest won’t talk about their action on or off the record. Anyone else will only speak off the record and the Board is not offering much detail about what took place that day or afterwards. What seems clear is that there was no punishment meted out to students either taking part in the protest or wearing keffiyehs the day before.

However, one source told me that students involved in the action were called to the Marc Garneau CI office several times the following week. The first was to explain why they held the protest and what they were trying to accomplish. The second time was to convince them to speak with a pro-Israeli advocate in order to hear the so-called “other side of the story.” The students declined. As far as they were concerned, their protest wasn’t about choosing sides between Palestine and Israel, but about fairness, equity and their ability to speak out for themselves. The TDSB has taken the side of groups known to be selective with information to support their stance, so their refusal makes good sense.

The Board Tries to Walk a Fine Line

In letters, first to the Marc Garneau CI community and then to school staff, the Board tried to walk a fine line between what it thought were opposing sides of an argument:

“The phrases ‘Free Palestine’ and ‘From the River to the Sea’ have been in contention. These expressions mean different things to different people because of the diversity of lived experiences in the TDSB community and beyond. Some members of the Jewish community have experienced these phrases as antisemitic, calling for the eradication of Israel, and hateful. Some Palestinians use these phrases as a statement of their human and land rights as people.

“Discussions about human rights are often complex and include an examination of competing rights. Our shared goal must be to develop learners who appreciate and are able to make sense of opposing viewpoints.”

The emphasis in the above statement should be on “some members of the Jewish community.”

Clearly, other members don’t see it that way. Jenny Stimac of Independent Jewish Voices Toronto (IJV) wrote to TDSB director Colleen Russell-Rawlins to say: “Claiming that Palestinians and their supporters who use this slogan are calling for the death and expulsion of Jewish Israelis – and even more inflammatory, “the annihilation of the Jewish people” – is not only false, but a cover-up of actual social relations in this region.”

And this is the problem with the TDSB’s approach so far. It’s not that some people think one thing and other people think another. There is a huge and well-documented body of information about Israeli settlements in the occupied West Bank, the separation wall that divides Palestinians from each other, the illegal blockade of Gaza, the restrictions on movement of Palestinians in occupied territories and laws enabling discrimination against them, to name a few examples. This gigantic imbalance of power over Palestinian people is at the heart of protest for generations against the Israeli government. The “listen to both sides” argument just doesn’t apply here.

Nonetheless, as TDSB Director Colleen Russell-Rawlins wrote in a letter to staff, the Board has committed to develop “resources” and focus “professional learning exclusively on antisemitism, and anti-Muslim hate in addition to other forms of discrimination.” Since the Board already has resources and has done professional learning in these areas for years, the question is what new direction the TDSB plans to take. Any steps it takes must be based on solid, thorough and truthful information. It needs to be reliable; uncomfortable facts must not be left out for the sake political expedience.

Yet, currently, the Board for some bizarre – perhaps political – reason has chosen to post a page about antisemitism from an organization that scrupulously avoids telling the full story about relations between Palestinians and the Israeli government. It relies instead on continued complaints about phrases or criticisms – not of Jewish people, but of the actions of the State of Israel. 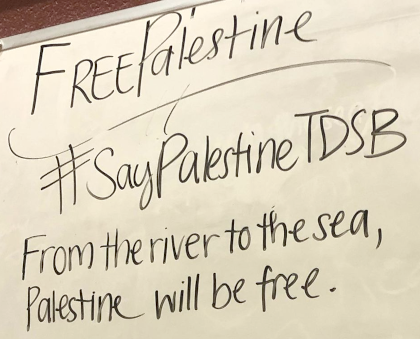 The TDSB can’t continue to post this page and ask its students and the community to engage in discussions of “competing rights.” This makes a farce of the exercise; it makes it obvious the Board has already decided the outcome of the discussion in favour of groups with power.

If the Friends of Simon Wiesenthal Centre have an ounce of honesty and community spirit, they will withdraw their blatantly misleading page. If they really want to do something other than inflame an already serious problem, they can stop blaming everyone but themselves and stop trying to restrict information to suit their purpose.

The students who walked out of Marc Garneau back in November called for education and discussion. They’re right and we should take their advice.

Demands Made by the Marc Garneau Students: