US Workers in Motion: An Assessment of Labor’s Gains

The news has recently highlighted labor’s growing activism, publishing numerous stories about high quit rates, threatened and actual strikes, and wage gains. While these stories do capture the anger and determination of workers who have suffered through the pandemic with limited compensation for dramatically increased workloads while watching profits soar, they also paint an overly optimistic picture of the gains being made.

And now, the media seems mesmerized by the threat of inflation, with those advocating austerity increasingly given prominent play. The reality is that the labor movement has a long struggle ahead, and it should not be distracted by unwarranted fears of inflation.

The figure below shows the movement in average real weekly earnings of private sector production and nonsupervisory workers – about 84 percent of the private sector labor force. As we can see, earnings fell dramatically from the mid-1970s to the mid-1990s before starting a long, slow climb. The spike in 2020 was largely the result of pandemic-driven closures which disproportionately affected low wage workers in the retail and leisure and hospitality industries. Their forced unemployment shifted the composition of the active work force to higher earning workers, thus producing a higher average for the economy as a whole but without those employed experiencing any wage gain. Now, as the retail and leisure and hospitality industries have started to rehire, average earnings have begun to fall. 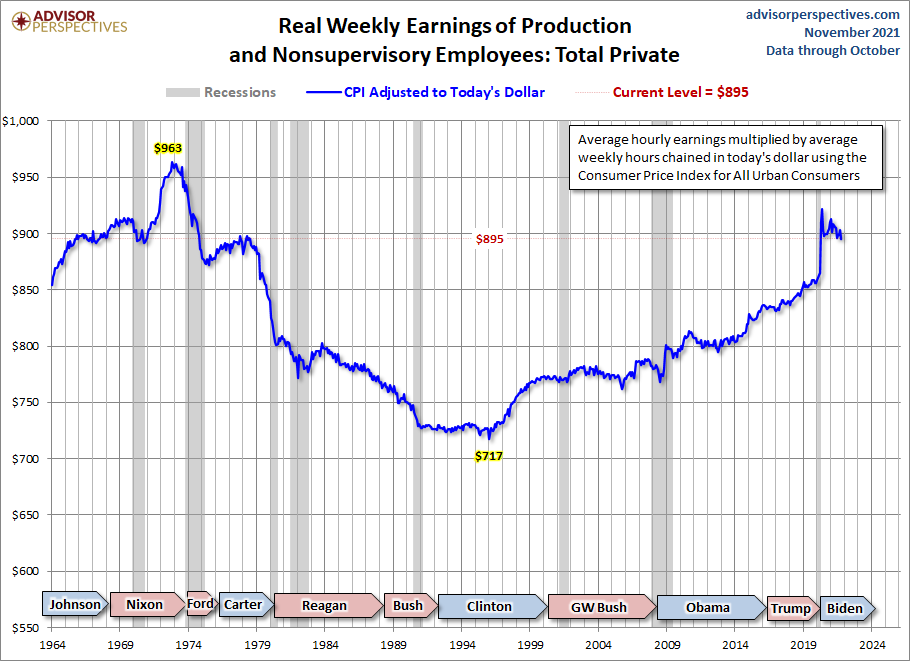 In short, production and nonsupervisory workers have suffered through decades of wage stagnation and, despite gains, still have a way to go before regaining their past peak earnings. Multiplying the October 2021 real average weekly earnings by 50 yields an annual income of $44,773. That is 7 percent below the similarly calculated peak of October 1972.

At the same time, the growth in inequality means that the mean earnings highlighted above have grown ever less representative of the typical worker’s earning experience, which would be better captured by the median. The following figure, although for all households, highlights the growing difference between the two measures. In 1967, the mean household received 12 percent more annual income than the median household. It was 44 percent more in 2020. 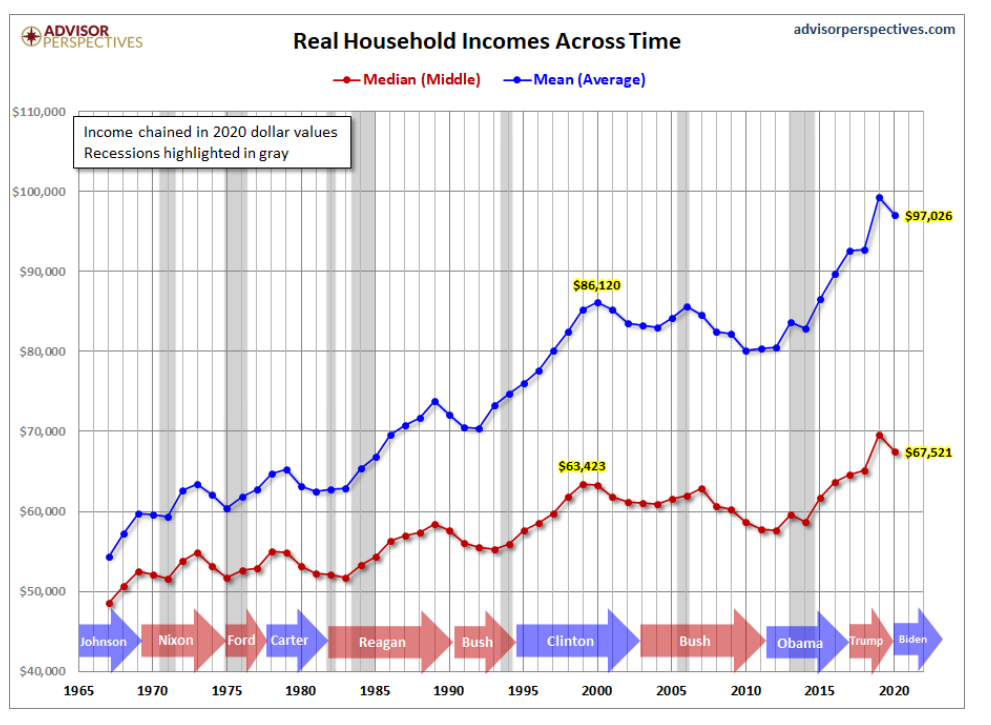 The next figure shows the three-month moving average of median hourly wages (for all workers) through September 2021. While median wage gains are indeed accelerating, the gains themselves are far from noteworthy by historical standards, especially given current price increases. 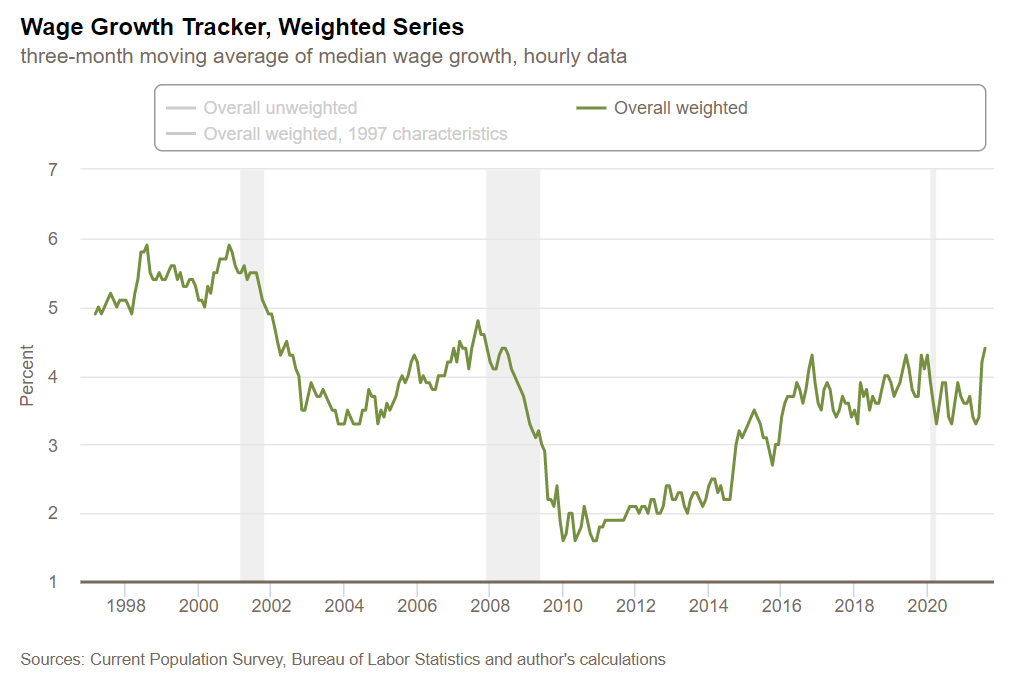 Moreover, as the following two figures show, it is really only the lowest-paid (1st quartile), and youngest workers (age 16-24), that are experiencing this accelerating hourly wage growth. 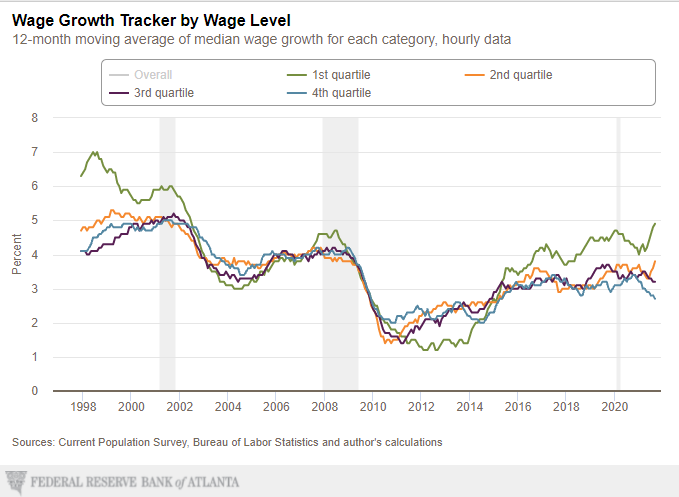 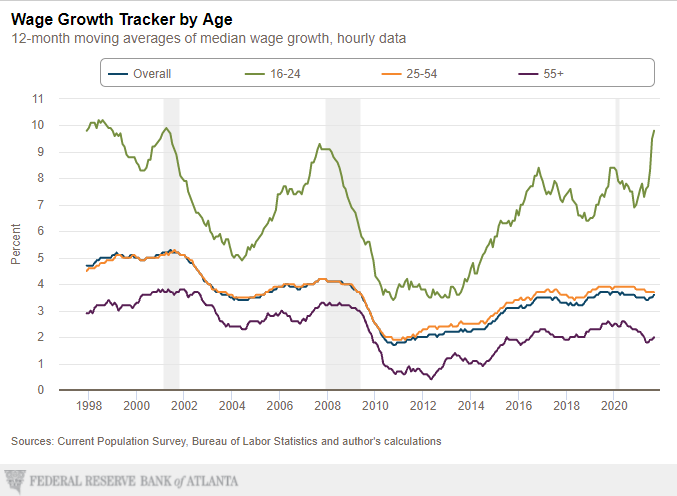 While it is worth celebrating that it is the lowest paid workers enjoying the greatest acceleration in hourly wages, there is a caveat to even this positive development. The leisure and hospitality industry has the lowest average wage of all industries, and the hourly wages of its workers, as we see below, are increasing at a more rapid rate than those in other industries, including retail. 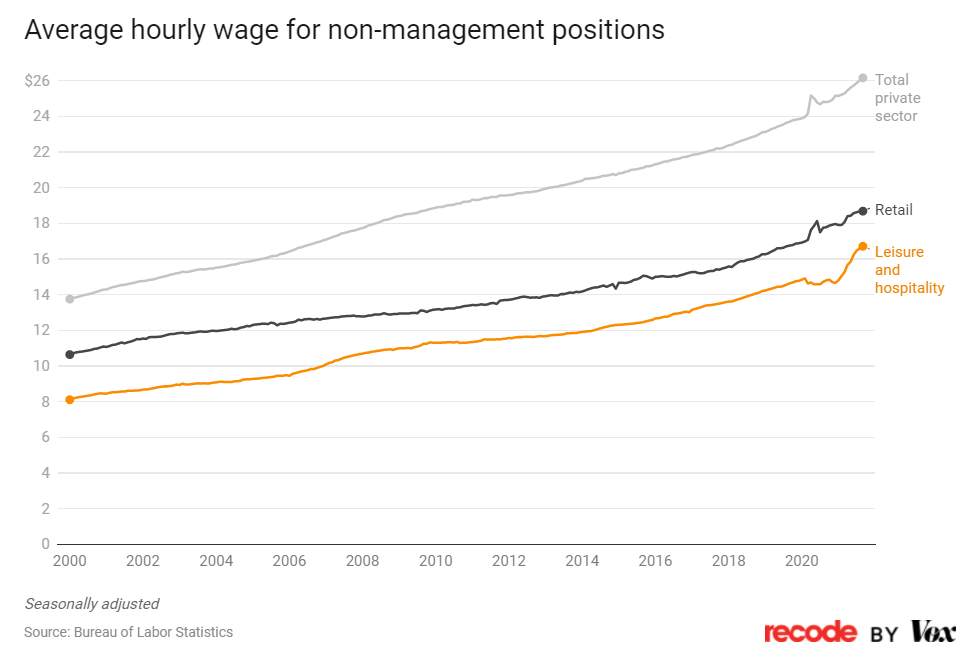 However, because of the continuing low number of hours worked, the benefits from this gain have been limited. Workers in the leisure and hospitality industry averaged 24.6 hours a week in October 2020 and only 25 hours a week in October 2021. It is the only industry with an average work week below 30 hours. As a result, average weekly pay in leisure and hospitality stands at just $416.08, far below what most workers and their families need.

There does appear to be a new willingness on the part of workers to leave bad jobs, organize unions, and fight for good contracts. And that development deserves to be applauded and supported. To this point, worker gains have yet to squeeze corporate profits. Regardless, many corporate leaders, fearful of what might happen in the future, are mobilizing to undermine worker power. Raising the threat of inflation, they are calling for the government to hike interest rates and reign in spending so as to slow the economy, thereby shifting the balance of power more firmly in their direction. This corporate offensive needs to be aggressively resisted.

Some inflation is a small price to pay for enabling workers, especially the lowest-paid, to improve their working and living conditions. We certainly know, based on recent experience, that austerity policies will only suppress investment and growth and worsen conditions for most working people.

Moreover, the main cause of our current inflation is the continuing strong demand for goods in the face of a struggling supply chain that had issues even before the pandemic. And the best way to overcome that problem is an aggressive program of government spending that speeds the transition of the economy away from fossil fuels; promotes more energy efficient housing, transportation, and agriculture; and supports affordable, accessible, and accountable public services.

In sum, working people need to continue to press for meaningful workplace gains, resist corporate efforts to push austerity, and fight for more transformative state and national policies. A tall order, for sure. But there are growing signs of a new impatience with the status quo and a willingness to take on powerful business interests that do offer hope. •

This article first published on the Reports From the Economic Front website.