Heads of state from the world’s wealthiest countries gathered for the first time in person since the start of the COVID-19 pandemic at the recent G20 summit meeting in Rome, Italy. The two-day meeting culminated in a grand dinner at the Quirinale Palace, where the evening’s menu featured salmon with dill, pumpkin risotto, sea bass fillets, tomato and celeriac puff pastry, and for dessert, a “delicate” steamed mandarin cream. Guests sat around a large formal dining table in a high-ceilinged palatial room with an impressive crystal chandelier and window dressings of tasseled red drapes.

The dinner was the modern-day equivalent of “let them eat cake,” the phrase (inaccurately) attributed to the epitome of frivolous luxury by the ruling class (and the last queen of France before the French Revolution), Marie Antoinette. The leaders of the G20 countries, who had gathered under the banner of “People, Planet, Prosperity,” appear to have disproportionately focused on the third rung of their agenda and limited its scope to the prosperity of elites like them. On the three critical issues of climate change, global corporate taxation, and COVID-19 vaccines, the world’s wealthiest countries looked out for themselves at the expense of the rest of the world.

In contrast to the United Nations General Assembly, which represents all the world’s nations, the G20 is a self-selected private club of the top tier of global wealth, only one step below the even-more-exclusive G7 club. Its members are mostly economic powerhouses, with a handful of exceptions of developing countries such as India, China, South Africa, Mexico, and Argentina. 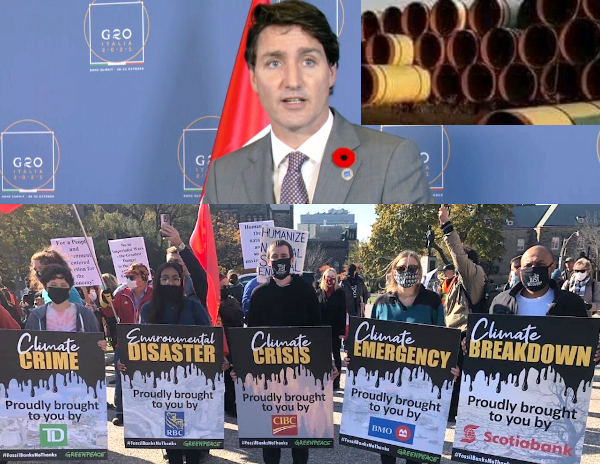 Proudly proclaiming that G20 “account for more than 80 percent of world GDP” and “75 percent of global trade,” the club sets the rules of global finance. Summit host Mario Draghi, the Italian prime minister, said the 2021 gathering demonstrated that multilateral decision-making is once more possible, declaring, “We have succeeded, in the sense of keeping our dreams alive,” with no mention of how self-serving the exclusive club really is.

Although the 26th meeting of the United Nations Conference of Parties (COP) in Glasgow, Scotland, is currently generating more news headlines than this year’s G20 summit, wealthy nations made many of their preliminary decisions on climate change at their club meeting before the global climate gathering. While they came to agreement on a handful of issues, such as cutting off funding to coal plants, and getting to “net-zero” emissions in a few decades, climate advocates slammed the pledges as “the bare minimum.” Draghi admitted, “It’s easy to suggest difficult things. It’s very very difficult to actually execute them.”

Eric LeCompte, executive director of Jubilee USA Network, explained to me in an interview that developing countries are suffering from the fact that “their natural resources were taken during the industrialization period that took place in Europe and the United States in the 1800s and the 1900s, fueling the climate crisis.”

Most of these same countries were left out of the recent climate discussions by the G20, as they are too poor to be considered members of the exclusive club. It remains to be seen if these countries will be able to extract greater commitments at the COP26 meeting.

LeCompte reflected, “it seems right now that there is a lot of despair among countries in terms of if it’s going to be possible to fulfill” pledges like a $100-billion financing pledge to help poorer nations combat climate change. Indeed, UN Secretary-General António Guterres declared on Twitter as the summit ended, “While I welcome the G20’s recommitment to global solutions, I leave Rome with my hopes unfulfilled.”

In addition to their shamefully insufficient climate pledges, G20 leaders congratulated themselves on tackling the issue of corporate tax evasion. The grand agreement they came to was a minimum 15 percent tax rate for wealthy companies. Hailed as a historic deal, the goal was to ensure reliable tax revenues from big corporations that chase tax havens offering lucrative terms. US Treasury Secretary Janet Yellen declared that the agreement would “end the damaging race to the bottom on corporate taxation.”

LeCompte commented that the 15 percent minimum rate was “certainly progress but falls short of the more ambitious calls of the Biden administration earlier on of 27-28 percent.” And, shockingly, it exempts digital technology corporations largely based in the US, like Google, Facebook, Amazon, and Apple, from being subject to this bare-bones rate. The US essentially lobbied the G20 on behalf of these major companies to carve out the loophole.

LeCompte explained that “this agreement really only supports and helps the wealthy countries.” While the United States would raise an additional $60-billion in revenues if the agreement is actually adopted, developing nations would not see much of an increase in revenues and are particularly impacted by the tax exemptions for digital technology companies. Even the Wall Street Journal admitted that the G20 tax deal “makes rich countries big winners.”

The G20 nations are also disproportionate beneficiaries of COVID-19 vaccine technology. Draghi opened the summit’s proceedings by acknowledging that the world’s wealthiest nations have vaccination rates of about 70 percent while only 3 percent of residents in poor nations have been vaccinated. He called such a gap, “morally unacceptable.”

Indeed, LeCompte shared that “the crisis in many developing countries is really horrific,” and that “most countries are experiencing economic loss because of not having access to vaccines.” Ahead of the summit, he expected the G20 to offer a concrete plan for financing and distributing vaccines to the world’s poorest nations. And yet, at the summit, “they didn’t do that,” said LeCompte. Instead, he said that “they put forward a process in order to do it.”

That process was essentially to create a task force, which, according to a statement signed by G20 leaders, is “aimed at enhancing dialogue and global cooperation on issues relating to pandemic prevention, preparedness and response.” One advocacy group, Global Citizen, dismissed such demonstrations of lip service, saying, “It’s no longer the time for statements of intentions. Now is the time for our leaders to act.”

Among the only pandemic-related achievements at the G20 was a deal that the US arranged for the African Union to buy 33 million doses of the Moderna vaccine originally intended for sale to the US – an embarrassingly low bar for success on vaccine equity.

While the G20 leaders and their spouses enjoyed their fine dining experience at the culmination of their two-day meeting, it became clear that the summit was little more than an exercise in grand pontifications of multilateralism. Like the erstwhile top echelons of pre-revolutionary French society, the world’s wealthy nations remain out of touch with reality. •