Organizing Insurgency (2021) argues that the contemporary era of imperialism is marked by the extension of exploitation of Southern workers in core sectors of the economy: agriculture, mining, and industry. Indeed, incidences of protest are expanding in absolute numbers as industrial production shifts to the Global South,1 where 83% of the world’s population of 7.7 billion people reside. These workers are subjected to far more onerous and dangerous labour conditions than industrial workers in developed countries.

In recent years, workers have engaged in mass protests at a higher rate than ever to obtain political power. In the 2010s, mass protests occurred unabated throughout the South, in a range of contexts. The struggles are in large and small factories that have directly disrupted global value chains essential to the production and distribution of goods and services in ‘advanced’ economies. 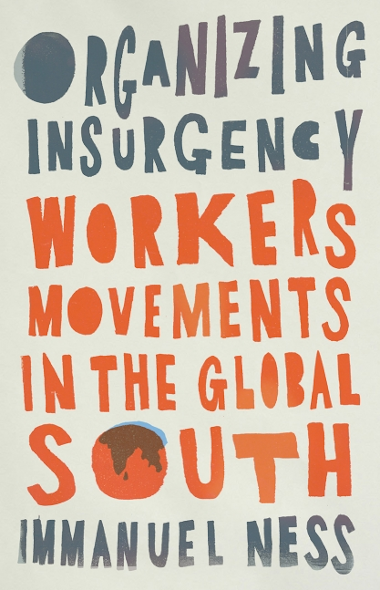 Second, I contend that workers in the rural and urban informal sectors of the South are firmly integrated into global commodity chains, and that their labour is essential to the maintenance of profit rates worldwide. Profits are extracted from workers in rural regions as well as those who migrate back and forth from rural to urban areas for economic sustenance. Informal workers surrounding major economic centres are major sites of economic contestation between labour and capital. While arable lands are located in regions of the Global North and South, the production of key agricultural commodities such as coffee, cocoa and tropical foodstuffs are in regions where wages are low due to imperialist underdevelopment and where, as a consequence, there is an oversupply of labour.

On a planetary level, urbanization has not reduced the total population of agrarian workers. In fact, the evidence shows that rural labour has expanded in the first two decades of the twenty-first century. Indeed, the agrarian population has continued to grow over the past century, and even over the past 50 years. Population growth in rural regions challenges the dominant narrative generated by the United Nations which focuses on ineluctable urban growth globally. While urban growth is indeed expanding, the rate of rural population growth is also expanding. Concomitantly, mass urbanization over the past century has increased populations in major urban centres, especially in the South. The vast majority of populations in major cities of the South live in abject poverty without basic necessities such as electricity, running water, sanitation, and access to basic services.

Third, Organizing Insurgency affirms the significance of strong working-class political organization to advance and grow: political and economic representation is crucial to improving the quality of life in the global South and building the power of labour. The Southern countries show that worker unrest and popular social movements are ubiquitous in contemporary neoliberalised capitalism. The size and intensity of protests are expanding today as industrial labour has expanded dramatically from the 1990s to the present. Even as workers engage in mass mobilization, the disconnected nature of protests does not ensure that successful strikes are consolidated to become the basis for the development of socialism, solidarity, and equality.

Waiting for the Global Working-Class Upsurge

Most current popular and academic interpretations of the state of the world’s working class agonize over the absence of resistance and protest against labour exploitation and low wages. In contrast, I contend that workers do engage in protest in a range of urban and rural regions. Researchers (such as Munck, 2018, and Silver, 2003) are awaiting the moment when an upsurge of worker protest will occur. In sharp contrast to the view that workers must form mass movements, over the past 50 years of neoliberalism, labour protest is ever expanding as the world’s working class has grown dramatically.

So, if workers are in motion, what is missing? I argue that a paucity of social and political working-class organization is a defining feature of protests in rural and urban areas alike. The argument is not new but is often missing in the literature on contemporary labour movements. As existing trade unions and left political parties declined, much scholarship focused overwhelmingly on new formations. In part, this is a result of the aversion to past and present socialist working-class organizations that have disillusioned many on the Left. In this way, scholarship has sought to identify new forms of amorphous and nebulous working-class organization that are said to have emerged from a new form of transcendent autonomous popular activity as somehow embodying popular power through an ‘assembly’ of the ‘multitude’ (to link two Hardt and Negri’s Multitude and Assembly titles seeking to describe this new kind of workers’ control).

If workers are protesting against exploitative and oppressive conditions, then why is there no tangible and sustained improvement in their conditions? In every instance of mass social transformation, disciplined socialist organizations have been integral to the consolidation of political protest into a cohesive party and movement. In promoting political power for workers, it is necessary to take into consideration a wide range of literature by theorists of popular struggles. Yet a vocabulary of anti-socialism is the leading form of accepted knowledge today, so that analyses of actually existing socialism or communism typically focus on failures rather than major achievements. The resulting ideological disillusion militates against the attainment of power by the working class.

As we enter the 2020s, the nature of labour and work has transformed irrevocably as more and more people are forced into the labour market. On a global scale, wages, conditions, and working-class organization have declined dramatically. In rich countries of the global North, the outsourcing of capital and the closure of manufacturing have pushed more workers into services and commerce. In the Global South, foreign investment and outsourcing have increased the share of workers employed in manufacturing industries which primarily supply commodities and natural resources to the global North.

Importance of Political and Economic Organization

Neoliberalised capitalism has taken hold throughout the world over the five decades since 1970 as the of the global working class has seen its organizational status decline precipitously. As Left parties have adopted market-based policies, financialization and privatization have produced a general transfer of wealth to the upper classes, and opportunities to achieve public solutions to growing poverty and inequality have decreased dramatically. Even if driven by electoral support, liberal and social democratic political parties are unwilling and unable to shift course due to the overwhelming power of finance capital. In the Global North, neoliberal policies have created greater inequality, but have not significantly reduced the standard of living for most workers, as consumption rates of workers have increased.

In the Global South, where abject poverty is systemic, political parties and governments are incapable of challenging the dominance of capital and finance in the Global North. United Nations (2019) data show that from 2000 to the present, the absolute number of people living in abject poverty has grown significantly. Without hesitation, Western capital can withdraw, sanction, and isolate countries seeking to redistribute wealth to the poor through nationalizing industry or the regulation of national markets and investments.

As global inequality and poverty have reached the highest levels today, Organizing Insurgency presents a comparative study of labour in the Global South, providing a highly accessible contribution to understanding the history, theory, and political economy of labour across continents and regions. As working-class shares of ‘national’ incomes have decreased in the metropolitan and settler-colonial countries since the 1980s relative to those of capital, international value transfer has ensured that this has not resulted in significant proletarianization.

Building on the analysis set forth in a myriad of studies examining class struggles in the South, Organizing Insurgency examines the expansion and proliferation of informal labour in the capitalist world system and its effects on the dynamics of the global class structure. It describes and explains the significance of: (1) the international division of labour, (2) national and regional labour supply and employment and unemployment (the ‘reserve army of labour’), and (3) the importance and magnitude of migrant labour in the global system. The three case studies – India, the Philippines and South Africa – are in the Global South, as they present the weak links of capital accumulation within the imperialist system: states where capitalist accumulation is most vulnerable as the expropriation of value is at the highest level. As a consequence, the capitalist infrastructure in each of these states are the least secure and most vulnerable to social transformation. •

Immanuel Ness is Professor of Political Science at City University of New York. His latest books are, Southern Insurgency: The Coming of the Global Working Class, and Organizing Insurgency: Workers' Movements in the Global South, both published by Pluto Press.