A critical perspective from a Cuban historian

None of the ostensibly post-capitalist regimes established since 1917 has managed to find a way to sustain mass democratic forms of governance and to build the popular consciousness and capacities needed for the transition to a socialist society. Whatever their origins, these regimes have come to rely on monolithic party formations that function essentially as a part of the institutional structure of the state, not independently of it. Cuba is no exception, notwithstanding its heroic history of mobilization against imperialist threats and in internationalist solidarity.

In the following article, Cuban historian Alina Bárbara López Hernández explores this dilemma in the context of the social protests that occurred throughout Cuba on July 11. She focuses in particular on the way in which the single-party system has shielded the government from popular concerns and demands, curtailed public political debate, alienated the youth, and fostered the growth of bureaucratic lethargy that hinders efforts at economic and social reform. Although she does not suggest a solution to this problem, she emphasizes the need to open up a debate on it within Cuba, and to encourage all forms of democratic expression within that process.

Alina Bárbara López Hernández is a professor, writer and historian based in Matanzas. She is the coordinator of the on-line publication La Joven Cuba , in which this article appeared. — Richard Fidler 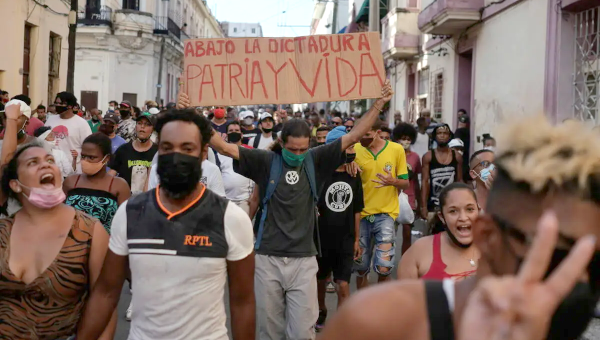 The Single Party System Faced with the Crisis

A political party that governs alone, that does not compete with another organization and that does not have to run in an election to be in power would seem to have a great advantage. Paradoxically, that privilege is, at the same time, its greatest weakness.

Not having to negotiate power, taking for granted that it will not be disputed, leads politically to a harmful attitude that assumes any hint of social pressure is unacceptable. When it occurs, the consequent reaction shows absolute ineptitude shielded with recklessness.

This authoritarian perspective is also strengthened by the teleological, mechanistic, and anti-Marxist approach to history which assumes that the socialist revolution, once victorious, cannot retreat. This over-optimism closes off the possibility of any process of successful improvement or reform.

The collapse of the socialist camp shattered many constitutions that declared it irreversible. It is not the text in a legal treatise that counts, but rather, the involvement of the people who find within that system the embodiment of their aspirations and who can modify it with that objective in mind.

The pressure of the majorities from below is what has made political systems evolve from ancient times until today. In the one-party model of bureaucratic socialism, the real and spontaneous participation of the citizenry in political activity is not allowed. This discriminatory condition explains why, faced with the July 11 social outburst, the Party reacted with brutality, in an authoritarian way rather than politically.

The lesson of thirty years ago was not learned in Cuba. In 2002, more than ten years after the disintegration of the USSR, a constitutional article declared socialism was irreversible, while the 2019 Constitution established that the Party is the “superior leading force of society and the State (…).” From that vantage point, the Party should have been in a better position to see that the conditions for a social explosion existed in Cuba. But not only did it not see, but it also demonstrated its incapacity to interpret the true causes of the conflict and to act accordingly.

The internal contradictions of social processes are the fundamental and determining factors. This principle of materialist dialectics is not applied by the Party in spite of its declared Marxist affiliation. Therefore, in the face of the social unrest, it has preferred to stick to a narrative that explains what happened based solely on external factors, real but not decisive: the pressures of the US blockade on Cuba, a soft coup, a fourth-generation war.

Up to now, there has not been a deep and self-critical analysis by the Party concerning itself and its responsibility for the crisis. If there had been, they would have admitted that none of the key proposals that in recent times created hope for changes to transform socialism from above came to anything. They were:

A socialist system that cannot be influenced from below is a pipedream, and ours is trapped in a flagrant contradiction: we have approved a constitution that is not viable. One part of it tends to sustain a situation of infringement of freedoms – especially in its Article 5, which declares the superiority of the single Party – while another part recognizes these rights and freedoms under a Socialist Rule of Law.

No exclusively economic reformist process is feasible because when the citizenry is not actively involved in controlling the direction, results, and speed of the transformations, changes run the risk of being dismantled or curtailed. Cuba has been no exception. The bureaucracy has become a “class for itself” within society and hinders changes and reforms that, although it accepts them on paper, it has delayed in practice.

A great unresolved conflict, wherever bureaucratic socialism is established, is that of converting state property into true social property. This aspiration has been utopian due to the lack of democratization, the lack of citizen participation in economic decisions, and the fact that the unions are no longer organizations that defend the interests of the workers.

The arrogant attitude of the Party is typical of a political model that has failed. In February 1989, the Soviet magazine Sputnik devoted an issue to the stagnation that characterized the period of Leonid Brezhnev, and it asked these questions:

“Should the Party leadership become a special organ of power, which is above all other organs? If the Central Committee is a special organ of power, how do we control it? Can its decisions be protested as unconstitutional? Who is responsible in the event of failure of a decreed measure? If this superior organ in fact directs the country, then shouldn’t it be elected by all the people?”

In this political model, the Party is selective, a “vanguard,” and not a popular party open to all, so that if it declares itself as a force superior to society, it also sets itself above the people. For this not to be so, the people should be able to elect those who head the Party, and this is not allowed. If it is over and above everybody, and it is not “an electoral party,” it is out of the people’s control. That’s the political model that must be changed.

The younger sectors have no memory of the initial and most successful social policy stages in the revolutionary process. To them, the revolutionary narrative, the evident transformations and the benefits of the first decades, have little impact.

They have known during the last thirty years, with its legacy of poverty, a sustained increase in inequality, failed life prospects, and the anticipation of emigration at ever-younger ages. The arrival of the Internet has coordinated them as a generation, allowing them to contrast opinions, build virtual spaces for participation that the political model denies them, and to generate actions.

So, we must recognize that the main contradictions that led to the 11th July outburst are eminently political. The demands were not only for food and medicine or against the power cuts. These may have been the catalyst, but the “freedom” slogans that swept the island indicate the demand of the citizens to be recognized in a political process that has ignored them up to now.

The party was totally disoriented by the 11th July events. This was shown by their responses:

However, although it never acknowledges or apologizes, the Party knows that it made a very costly mistake.

Voices have been raised from sectors of the left and some prestigious figures and organizations, demanding respect for the political rights of peaceful demonstration and for freedom of expression in Cuba. Several governments, and the European Union as a bloc, have criticized the violent repression, surely unconstitutional.

Palliative measures are now beginning to be taken to alleviate the tragic shortages: an increase in the amount of rice, a staple in the standard food basket, effective this month until December; free distribution of products donated to Cuba (grains, pasta, sugar, and in some cases, oil and meat products); and a price reduction in some services of Etecsa, the communications monopoly.

In addition, long-standing requests that would have served to mitigate the crisis much earlier have now been approved: imports of food and medicines without restrictions and free of customs charges; credit sales in stores. Others may be announced in the coming days.

There is no doubt that the situation will be somewhat alleviated, but the Party must be very aware that none of these decisions will solve the Cuban dilemma, which is, as I have already stated, of a political nature.

Perhaps they believe that by applying these palliatives they are discovering a new politics. They are wrong. Thousands of years ago, the Latin poet Juvenal, in his Satire X , immortalized a phrase that designated the practice of the rulers of his time: “Bread and circuses.”1 It was the plan of Roman politicians to win over the urban plebs in exchange for wheat and entertainments so that they would lose their critical spirit, feeling satisfied by the false generosity of the rulers.

In Cuba, we need bread and circuses, we are a suffering people, but – above all – we need to govern from below. We need to be the Senate, since our Senate has disappeared from the political scene. There has not been a single statement from any member of the National Assembly of People’s Power, as such, in spite of the seriousness of the violent acts against a part of the people they are supposed to represent.

They have violated the legislative schedule, saying it is impossible to meet in the middle of a pandemic. However, under the same conditions, the Party held its 8th congress and, after July 11, massive activities were organized in support of the government in all the provinces.

No official pronouncement has been made by the Party leadership analyzing the facts, offering exact figures of the cities and towns involved, participants in the protests, or people arrested and prosecuted. It was of no use to the single Party to have analyzed in the Political Bureau, a few days before the 8th Congress, a report entitled “Study of the socio-political climate of Cuban society.” Either they understood nothing of that climate, or those who wrote the report did not portray reality.

Single Party bureaucratic socialism creates a kind of political demiurge that escapes the rule of law, since it places itself above it, accentuates political extremism, and separates itself from the citizenry. So far, all models with these characteristics, far from leading to a socialist society, have disguised a state capitalism with features of corruption and elitism.

It is time to debate this and organize ourselves to change it. It is possible now. As the president of the People’s Supreme Court declared to the international press, in Cuba the Constitution guarantees the right to peaceful demonstration. •

This is a revised version of the English translation by Richard Fidler, published in International Viewpoint.

Alina Bárbara López Hernández is a professor, writer and historian based in Matanzas. She is the coordinator of the on-line publication La Joven Cuba.