The following is an open letter addressed to Unifor National President Jerry Dias from Labour Against the Arms Trade, a grassroots coalition of peace and labour activists working to end Canada’s participation in the international arms trade. 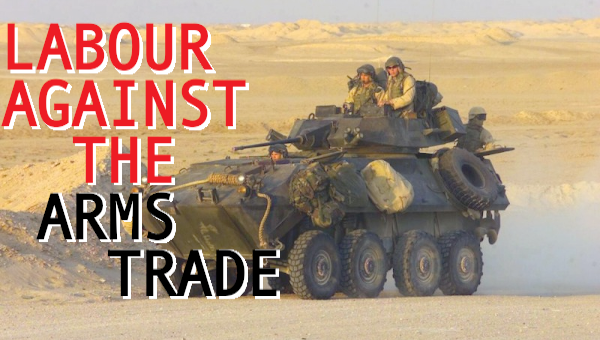 I am writing to you on behalf of Labour Against the Arms Trade. We are a coalition of labour and peace activists working to end Canada’s participation in the international arms trade. We organize for arms conversion and a just transition for arms industry workers.

We applaud Unifor’s recent statement condemning the atrocities committed on the people of Gaza by the State of Israel (May 18, 2021, “Unifor condemns attacks on Gaza”). Unifor has called for the Canadian government to immediately issue a full weapons ban and embargo on Israel, stating “We should not be supplying arms that Israeli forces are using to commit these human rights atrocities against the Palestinian people.” We wholeheartedly agree: Canada should not be supplying arms to Israel or any government committing human rights atrocities.

On June 11, 2020, Labour Against the Arms Trade joined Project Ploughshares, Oxfam Canada, Amnesty International Canada, and other civil society organizations for a pan-Canadian day of action against arms exports to the Kingdom of Saudi Arabia, including the export of $15-billion worth of light armoured vehicles (LAVs) manufactured by General Dynamics Land Systems-Canada in London, Ontario. This day of action was endorsed by the Canadian Labour Congress. 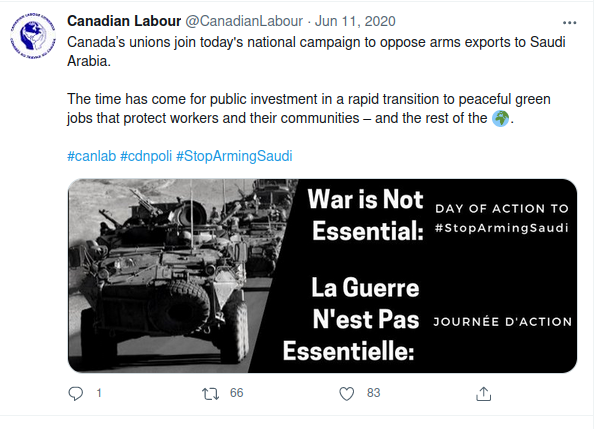 On June 11, we called for the cancellation of arms exports to Saudi Arabia, and in recognition that all workers have a right to decent work, the conversion of arms industries for socially useful production and a just transition for arms industry workers. In advance of the day of action, we wrote to the leadership of Unifor Local 27, which represents workers at General Dynamics Land Systems-Canada, cc’ing you, to request dialogue on this issue. Unfortunately, we did not hear back from you or the leadership of the local.

The June 11 day of action was followed by a second pan-Canadian day of action on September 17, 2020, and an open letter to Prime Minister Justin Trudeau, which called for an end to arms exports to Saudi Arabia and for the Government of Canada “to work with trade unions representing workers in the arms industry to develop a plan that secures the livelihoods of those who would be impacted by the suspension of arms exports to Saudi Arabia.” The letter was signed by 39 civil society organizations, including the CLC and a number of national unions.

Saudi Arabia heads up a military coalition that has been waging war in Yemen for over six years. The Saudi-led intervention in Yemen has contributed to what UNICEF has called the “world’s largest humanitarian crisis,” with an estimated 80 percent of the Yemeni population—24 million people—requiring some form of humanitarian assistance. 16.2 million Yemenis are food insecure. Almost a quarter of a million people have died in the war. In September 2020, a United Nations Human Rights Council panel on Yemen named Canada as one of a small group of countries that “continued their support of parties to the conflict, including through arms transfers, thereby helping to perpetuate the conflict.” Saudi Arabia has repeatedly bombed civilians and civilian infrastructure, including schools, hospitals, markets, and a Yemeni school bus, killing 44 children.

Canadian arms exports to Saudi Arabia do not line up with Canada’s legal commitment under the Arms Trade Treaty or a feminist foreign policy. And of concern to all trade unionists, Saudi Arabia ranks in the International Trade Union Confederation’s “10 Worst Countries in the World for Workers’ Rights.”

Brother Dias, we would welcome the opportunity to speak with both you and the leadership of Local 27 about our campaign. We believe, as a matter of moral consistency, Unifor’s call for a full weapons ban and embargo on Israel should be followed by a call for the Government of Canada to immediately end arms exports to Saudi Arabia. Labour can and must do its part to stop the flow of arms to Saudi Arabia. Our movement’s commitment to peace, human rights, and solidarity with working people everywhere, demands it. We look forward to hearing from you. •

This letter also published on the Canadian Dimension website.

Labour Against the Arms Trade is a coalition of peace and labour activists working to end Canada's participation in the international arms trade. Follow them at LAATCanada.