How Many Strikes Are There in the USA?

The number of strikes in the United States is a question with obvious importance to labor activists, yet there is no readily accessible answer.

The Bureau of Labor Statistics (BLS) releases an annual work stoppage summary in February reporting the number of strikes and lockouts over the prior year – but only those that involved at least 1,000 workers and lasted an entire shift. This is especially problematic because nearly 60 percent of all private sector workers are employed by companies with fewer than 1,000 employees. Even many of those who work at big firms are in bargaining units or workplaces with under 1,000 workers.

The BLS kept track of all work stoppages involving six workers or more and lasting at least a full shift until 1982, when cuts by the Reagan administration diminished resources for labor research and statistics. 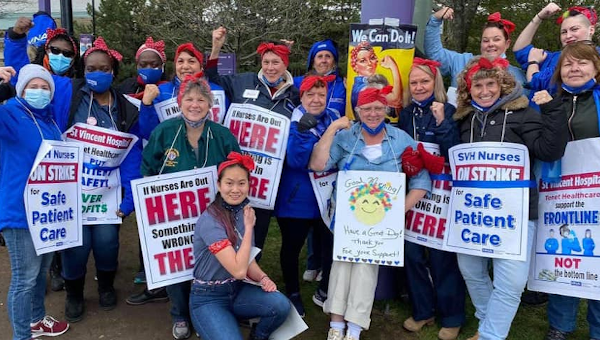 According to BLS data, strikes increased significantly in 2018 and 2019 – after a long decline – before returning to historic lows in 2020. But we cannot know for certain how accurate a picture this is, since the BLS excludes a sizable amount of strike activity by only capturing big strikes. Even the ongoing strike by the Massachusetts Nurses Association at St. Vincent Hospital in Worcester – owned by Tenet Healthcare, one of the country’s largest for-profit hospital chains – is left out of the BLS data, because the strike involves just 800 nurses.

This gap in our understanding of strike activity is a serious limitation for our knowledge about the labor movement. To help fill this void, we have created the ILR Labor Action Tracker, housed at Cornell University’s School of Industrial and Labor Relations, to more accurately track strikes and labor protests across the USA. (Unlike the BLS, we are not currently collecting data on lockouts, though we hope to add that data in the future.)

One important advance is that our tracker also includes labor protests, such as rallies and informational pickets. That means it includes the recent rally by 2,000 food delivery drivers in New York City demanding better pay and improved health and safety. It also includes a multi-city action by Tribune Publishing employees – who work for newspapers like the Chicago Tribune and Baltimore Sun – to prevent the sale of the company to a hedge fund.

Considering the vast legal and economic obstacles to striking, we believe it is important to capture these types of events to show the wide range of tactics used by US workers in the 21st century. Users are able to search our interactive map for strikes and labor protests separately or both types of actions together.

We distinguish between strikes and labor protests based on whether a temporary stoppage of work occurred as part of the action. This definition of a strike is relatively inclusive, covering actions like wildcats and sickouts.

In some cases, such as the national days of action associated with the Fight for 15 campaign, it can be particularly difficult to determine whether the action should be labeled a strike or labor protest. But if we can convincingly demonstrate, based on the sources we cite, that a collective stoppage of work occurred as part of the protest, we will add that event to our tracker as a strike. Full information about our methodology, including how we add actions to our tracker and the other variables we capture, can be found here.

We began tracking strikes in late 2020, though our database is most reliable beginning in March 2021. We have discovered a much different reality of strike and protest activity in the United States than existing sources indicate.

We found that 28 strikes occurred during the month of April alone. That includes all strikes that began after January 1, 2021, and were still ongoing at some point in April. This stands in stark contrast to recent annual data from the BLS, which identified just seven major work stoppages in all of 2017, 20 in 2018, 25 in 2019, and eight in 2020. The BLS documented just six strikes in April; among the strikes it excluded were the aforementioned walkout by 800 Massachusetts nurses at St. Vincent Hospital, a strike for a first contract by 200 faculty members at the Oregon Institute of Technology, and a strike by 24 distribution workers fighting for a pay increase after a four-year wage freeze at N.H. Scheppers Distributing in Missouri, among many others.

Labor scholars and activists in a couple of other countries have created similar strike maps to document collective action.

China Labour Bulletin’s Strike Map records a wide range of collective action by Chinese workers. It’s an especially important resource given the government’s repression of independent labor organizing efforts there. In the month of May alone, the map has documented strikes by taxi drivers and delivery workers and dozens of protests by construction workers, factory employees, and media workers for back wages.

UK activists have created strikemap.co.uk, which also includes a number of stories about important strikes. The map was inspired by a chapter on strike threats in Robert Ovetz’s recent book, Workers’ Inquiry and Global Class Struggle: Strategies, Tactics, Objectives.

While we know that more strikes are occurring than existing data would indicate, we recognize that strike activity today is nowhere near the levels seen in the mid-20th century. For example, the BLS identified an average of 821 work stoppages (both strikes and lockouts, involving six workers or more and lasting at least a full shift) for the month of April during the 1970s, before the Reagan administration’s cuts forced the agency to only capture major events. Additional research is needed to generate more rigorous and informative historical comparisons.

Workers face immense obstacles to organizing and striking that have only become more pronounced over the past few decades. We hope that our project will amplify the voices of striking and protesting workers, as well as draw attention to these obstacles.

We welcome any feedback on how to make this tool more useful for workers and the labor movement. Our project aims to democratize data and inform labor activists about labor actions in their communities. Going forward, we hope to more accurately capture labor protests and pinpoint the location of ongoing strikes based on the address of a major picket line, which should help local activists support striking workers.

We are aiming to be as comprehensive as possible (especially on strikes) – so if you notice that we are missing a strike or labor protest, please use the report button on our website or fill out this Google form. •

Johnnie Kallas, a former labor organizer, is a PhD student at Cornell University’s School of Industrial and Labor Relations and director of the ILR Labor Action Tracker.

Eli Friedman is a professor and chair of the Department of International and Comparative Labor at the ILR School. He serves as faculty advisor of the Labor Action Tracker.

Dana Trentalange is a recent graduate student of the master’s program at the ILR School, and is the Labor Action Tracker’s coordinator and social media strategist.