Canada and Economic Sanctions Against Cuba: An Open Letter to Marc Garneau 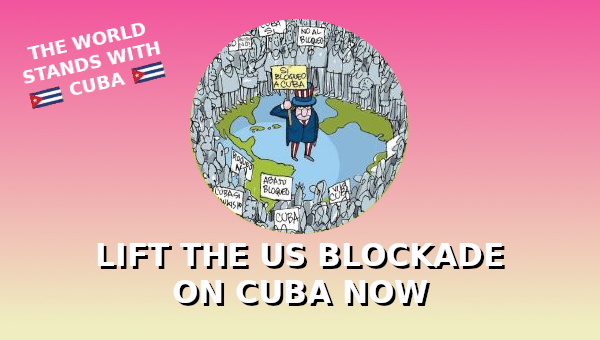 Re: June 23rd United Nations General Assembly Vote on Resolution Against US Economic Sanctions Against Cuba

I am writing to you on behalf of the Canadian Network On Cuba (CNC), which represents Canada-Cuba friendship and solidarity organizations from Vancouver to Halifax. Two of the CNC’s principal objectives are bringing an end to US economic sanctions against Cuba and ensuring that Canada’s relations with Cuba are based on equality and respect for the island nation’s independence, sovereignty, and the right of self-determination.

Since the early 1960s, the Government of the United States has imposed on Cuba the longest lasting regime of sanctions in history. It would not be an exaggeration to describe Washington’s policy as an economic war against the people of Cuba. The objective is the negation and extinguishment of Cuba’s right to self-determination, sovereignty, and independence. This effort to asphyxiate Cuba is an egregious violation of the human rights of the Cuban people and an intolerable violation of the right to self-determination.

In pursuit of its criminal and immoral policy, the Government of the United States pressures and coerces other countries to participate in its regime of economic sanctions against Cuba. Canada has not been immune from these pressures. For example, in 2017 the Office of Foreign Assets Control of the US Treasury Department fined the American Honda Finance Corporation (AHFC) $87,255 for approving and financing between February 2011 and March 2014 the leasing by Honda Canada Finance Inc. of 13 cars to the Embassy of Cuba in Canada.

Also, in 2020 Western Union Financial Services (Canada), Inc. decided to end the transfer of funds from Canada to Cuba. In a statement to the CBC, the company declared that the decision was “due to the unique challenges of operating remittance services from countries outside of the United States to Cuba.” This decision not only caused – and is causing – significant damage to people-to-people contacts and Canada-Cuba relations but is also a violation of the sovereignty of Canada by raising US law above that of Canadian law.

These violations of Canadian sovereignty constitute unambiguous acts of hostility against Cuba carried out within Canada by Washington. They also demonstrate that Washington’s economic sanctions against Cuba are not a simple bilateral issue between the United States and Cuba.

US economic sanctions – an economic blockade – constitute the principal obstacle to Cuba’s social and economic development; the cost to the heroic island-nation has been and is immense: more than $100-billion.

Most cynically, in this time of pandemic, the US economic war has made it extremely difficult for Cuba to obtain medical equipment and other necessary items required to protect and preserve the health of the people of Cuba.

Yet, in the midst of this aggression the Government of Cuba continues not only to protect and preserve the health of its citizens with the development of its own vaccines and treatment regimens but also to lead the global fight against the coronavirus. Almost 4,000 Cuban medical personnel in at least 39 countries and territories have participated and are participating in the frontlines of the fight against the COVID-19 in Latin America, the Caribbean, Africa, Asia, Europe, and the Middle East.

There is a growing recognition that Cuba’s example needs to be globalized, illustrated by the international accolades bestowed on Havana for its singular role in combatting the COVID-19 pandemic. Washington’s failure to isolate Cuba in international relations and public opinion is poignantly underscored by the numerous nominations of Cuba’s internationalist medical contingent – the Henry Reeve Brigade – for the 2021 Nobel Peace Prize.

In 2019, as in previous years – before the COVID-19 pandemic suspended normal UNGA activities – the global community overwhelmingly stood with Cuba, voting 187-3 in support of the resolution and, thus, against Washington’s economic war. Canada was once again counted in the vast ranks of the world’s nations resoundingly rejecting the coercive, unilateral, and extra-territorial US policy.

We, therefore, call on the Government of Canada to reject all coercive unilateral or extra-territorial measure that contravenes the rules of international law and the principles of the UN Charter by standing with the overwhelming majority of the world and support Cuba’s right to self-determination and independence by – as it has done in previous sessions of the United General Assembly – voting in favour of the resolution put forward by the Republic of Cuba.

This would reflect the support and affinity that Canadians have for Cuba, exemplified by the response to the recently initiated Petition to the Government of Canada, e-3456, on US economic sanctions against Cuba and Canada-Cuba relations. In less than 48-hours, the petition gathered the 500-signatures required to become part of official parliamentary records. At present, more than 1,500 supporters have signed the petition.

Millions of Canadians have travelled to Cuba and come away with a profound respect and admiration for the people of Cuba. Irrespective of their political or ideological positions, Canadians stand for the building of genuine friendship with the island nation: relations based on mutual respect, equality and recognition of Cuba’s right to self-determination and sovereignty.

In closing, I wish to thank you in advance for your consideration of these issues. If you have any queries, please do not hesitate to contact me.

The petition mentioned in the letter above is sponsored by Niki Ashton, Member of Parliament for Churchill–Keewatinook Aski, Manitoba. It calls on the Canadian government to strongly oppose the US economic blockade of Cuba. It also demands that the government ensure that Canadian businesses, banks, and other entities do not participate in US sanctions against Cuba. And that Canada should in every way treat Cuba as an equal, with full recognition and respect for Cuba’s sovereignty, independence, and right to self-determination.

The Canadian Network on Cuba is continuing to appeal to people to sign the petition, pointing out that “by gathering as many signatures as possible a powerful and clear message can be sent to Ottawa.” To read the petition and add your signature, go to petitions.ourcommons.ca/en/Petition/Details?Petition=e-3456.