As police and military forces in Colombia use violence to try to repress the massive mobilizations that grew out of a national strike, demonstrators have seen flagrant violations of their human rights.

Mainstream media in Colombia and the South American continent have been selectively silent about the atrocities, and so those seeking to either learn or share information on the situation have had to turn to social media to break the media blockade. During the day, photos are shared of the colorful marches and joyful mobilizations. At night, videos of terror start appearing with a distressing frequency: the mobile anti-riot squad (ESMAD) and police shooting firearms at defenseless protesters, agents of security forces chasing after young people in the poor neighborhoods to either shoot at them or arrest them and instilling terror in the population, and mothers crying and screaming because their children were killed.

According to Temblores and Indepaz, two human rights organizations that have been tracking reports of police violence, from April 28 to May 8, the violent actions of the state security forces resulted in the death of at least 47 people, the arbitrary detention of 963 people, 28 victims of eye-related injuries, and 12 victims of sexual violence. In total, they registered 1,876 cases of police violence. 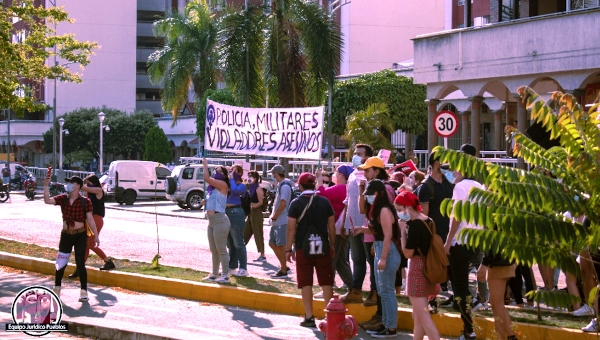 It has also been reported that in addition to the constant and systematic attacks by security forces on protesters, people carrying out roles of accompaniment and verification in the mobilizations – such as human rights defenders, journalists, and medical first aid workers – have also been the target of attacks and human rights violations by the police. The armed attack against a group of Colombian human rights defenders who were accompanying the verification mission of the United Nations in Cali on the night of May 3 was condemned widely, but far from being an exception, it is part of a strategy of terror and intimidation against those who speak out against the state’s repression.

After several nights of terror, the silence of the international community was broken. The United Nations Human Rights Office released a strong statement on the morning of May 4 expressing that it is “deeply alarmed” at what is happening in Cali where “police opened fire on demonstrators protesting against tax reforms, reportedly killing and injuring a number of people.” The international body reminds the authorities of the Colombian state that they have the “responsibility to protect human rights, including the right to life and security of person, and to facilitate the exercise of the right to freedom of peaceful assembly.” After the UN declaration, the EU, US, and others joined it in condemning the situation and calling on the Colombian government to withdraw the army from the streets and for an end to the violence against the civilian population.

However, instead of withdrawing the security forces or trying to limit their violent actions, the national government and local authorities have intensified the repression and are using their channels of communication to suggest that the people who participate in the protests are violent vandals, in an attempt to try to justify anything that happens to them at the hands of the authorities.

What Was the Motivation Behind the Protests?

The national strike in Colombia that began on April 28 was called for to fight against a bill that would increase taxes on goods of everyday consumption, public services, and pensions, among other things. It was a bill that would directly impact the working class that is already suffering due to the impact of the pandemic and the lockdown. While on May 2, Colombia’s President Iván Duque announced that he would withdraw the bill, he also stated that a fresh one would be presented that allegedly would be drafted with other political parties. Either way, the tax reform is nothing more than the tip of the iceberg. In Colombia, the neoliberal economic model has been consolidated throughout the past three decades. The state does not guarantee citizens basic rights such as education, health care, and housing.

According to a study carried out by the Index of Regional Development – Latin America in October 2020, Colombia is one of the most unequal countries in the region and has the widest development gap among its own regions.

The National Administrative Department of Statistics (DANE) published a report on April 29, 2021, that estimates that 21 million people, or 42.5 per cent of the population, live in poverty, an increase of 6.8 per cent from last year. They also confirmed that 7.4 million people are living in extreme poverty. Figures from DANE also indicate that 49.2 per cent of the working population is only informally employed, but according to Milena Ochoa, the director of the Corporation for Popular Education and Research – National Labour Institute (CEDINS), the real number could be closer to 70 per cent.

These populations have been hard-hit by the restriction measures in place to combat the COVID-19 pandemic, especially as the government has done little to provide economic aid. Another DANE report showed that from March 2020 to April 2021, 87.3 per cent of the deaths from COVID-19 were of people from the three lowest socioeconomic strata. Despite having a population of just 50 million, as of May 16, the Andean country was 12th globally in numbers of confirmed COVID-19 cases at 3,103,33 and 10th in numbers of deaths from the disease with 80,780.

It is from these impoverished sectors that the government wants to take resources to resolve the fiscal deficit and not, for example, from Luis Carlos Sarmiento of the Aval Group that controls one-third of the banking system in Colombia; or from Alejandro Santo Domingo, the owner of several telecommunications companies, the beer company Anheuser-Busch InBev and several malls; or from Carlos Ardila Lülle, the owner of sugar companies and TV channels.

Throughout the 60 years of internal armed conflict in Colombia, human rights organizations, trade unions, and social movements have been categorized by the Colombian state as internal enemies. The Colombian state has treated the internal political and social conflict as if it were a war with an enemy group. It has developed a counterinsurgency policy against the organized people, taking away all democratic space from the different organizational forms of opposition and instead responding with criminalization and political persecution.

According to the discourse of the state, what Colombia has suffered from for more than six decades is not a conflict with social origins, but rather a war waged by criminals against Colombia, as it is described in the theory of the two demons that Latin America and the Caribbean suffered during the implementation of the CIA-run Operation Condor. This enemy of the state changes in name, depending, of course not by coincidence but by orientations from the Pentagon, on US foreign policy. The political opposition to the capitalist and land-holding regime has been criminalized first in the “war against communism,” then in the “war against drug trafficking” and finally in the “war on terror.” With these excuses, the Colombian state, with an enormous amount of US support that goes from military training to concrete financing to improve the repressive apparatus of the state, has systematically attacked all organizational processes that seek to change the status quo of inequality and authoritarianism. Throughout history, it has sought to limit the political participation of this opposition at any cost, through dismantling organizations and outright extermination.

We see this manifested in diverse tragic experiences in Colombia during the 20th century: from Guadalupe Salcedo, a guerrilla leader with whom the state violated an agreement for demobilization and ended up assassinating in 1957, to the political genocide that took place in the 1980s and 1990s of the Patriotic Union, A Luchar, and other movements and political parties that emerged from the peace agreements during the 1980s, wherein the state, through the military plan Red Dance, exterminated at least 4,000 members of these movements and political parties in the countryside and cities of Colombia. This continues today, with the systematic assassination of social and political leaders; from 2016 to now, more than 1,000 people have been assassinated for political reasons. 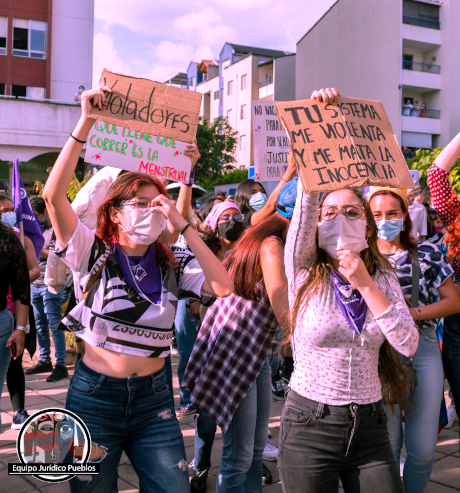 For the Colombian state, any expression of opposition is unofficially declared an objective of war, which must be dealt with either by the state’s own repressive apparatus or by paramilitary forces. Paramilitarism in Colombia has been a state policy, where with the collusion and financing of different governments, many different illegal armed structures have been created that are responsible for doing the “dirty work” that in theory the state cannot do, but does anyway, which is why we see hundreds of complaints of human rights violations by state forces.

It is in this context that one can understand the extreme violence that is being carried out today by the security forces against protesters during the national strike. This multitude of people on the streets is nothing more for the state than a group of “vandals and terrorists.” The military treatment of social protest is a central problem originating from the fact that in Colombia, unlike in other countries, security and defense forces are thought of as part of the same repressive force and fall under the Ministry of Defense. Essentially, they treat a civilian protest as they would treat a battlefield. This analogy is the only way to comprehend how the National Police opens fire on protesters, how helicopters fly above residential neighborhoods and how there are outrageous numbers of detained, tortured and disappeared in the context of this national strike.

The social uprising on the streets and in the plazas of the small towns and cities throughout Colombia is the accumulation of years of prioritizing militarization over guarantees to basic rights of health, education and housing, of criminalizing the social movement and alleging that social leaders and human rights defenders are terrorists, of killing with absolute impunity, and doing everything possible to discourage political participation of the citizens. What can be seen today in Colombia is an unprecedented mobilization, which has been able to politicize a generation that neoliberalism would have preferred remained depoliticized and uninterested in anyone else but themselves.

The social and political crisis in Colombia grew in size like a snowball, and today the people’s movements could create meaningful change in the direction of the country. The state, led by the Uribista government of Iván Duque and Álvaro Uribe, which seems to have far outlived its moment, responds to this enormous people’s celebration of change and transformation with a classic recipe: repression, assassination, incarceration, threats and fear. The Uribista government is attempting to take down with it anything it finds in its path.

Despite all this, Colombians of all ages are responding with organization, resistance, and joy, flooding the streets with the tricolor flag and embracing each other in this cry for justice. They organize community kitchens, take care of each other during the violent repression, and dance salsa and joropo together.

The era is giving birth to a heart, says the song of Cuban singer-songwriter Silvio Rodríguez. In Colombia, the people are giving birth to a new country. The strategy of the state no longer works. Today, the desire to change and advance from the warlike, colonial Colombia to a dignified, human Colombia for all overcomes the fear. •

Laura Capote is a Colombian journalist and an activist with Colombia’s Patriotic March. She is a member of ALBA Movimientos, and she works in the Buenos Aires office of the Tricontinental: Institute for Social Research.