Will Andrés Arauz Be the Next President of Ecuador?

In Ecuador’s presidential election held on February 7, 2021, Andrés Arauz won the largest number of votes but could not prevail in the first round against 15 other candidates; he won 32.71 per cent of the vote, short of the 40 per cent needed to win the election outright (a winner also requires a 10 per cent lead over the second-place candidate, which Arauz did achieve).

More than a week after that first round, it remains unclear which of the two candidates who most closely trailed Arauz will go head-to-head against him in the second round on April 11. Both of these candidates – Guillermo Lasso and Yaku Pérez – each won around 19 per cent of the vote and await a recount to verify who will face Arauz. A Lasso-Pérez pact sought to remove Arauz from the runoff election’s ballot; this is of great concern for Ecuador’s democracy, although Lasso now says he has backed away from the agreement (Eds.: Lasso has just been announced as the other second round candidate, but Perez supporters are disputing the result). 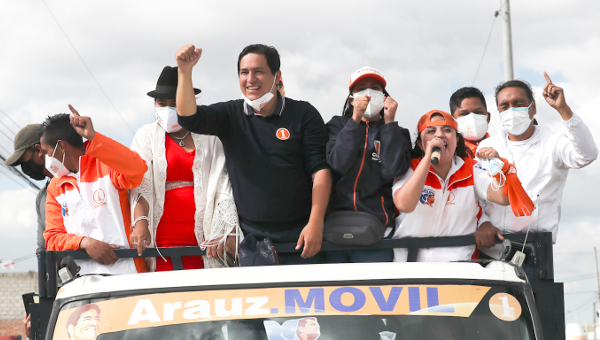 Against all odds, Arauz won the first round conclusively. Till the very end, the Consejo Nacional Electoral (CNE) – the national election body – tried to postpone the elections, sowing doubts about voting during the pandemic and about the transfer of public funds to the candidates so as to make the process more equitable. The minister of defense – Oswaldo Jarrín – said in late January that the ballots would not be printed, even though his ministry had made an agreement with the CNE. Right through 2020, the CNE and other branches of the Ecuadorian government attempted to suffocate democracy by preventing the candidacy of both former president Rafael Correa and Arauz.

Hollowing Out the State

When Lenín Moreno took office in 2017, he began a process that led to the weakening of democratic institutions in Ecuador. The main office-bearers in several state institutions – such as the Constitutional Court, the Supreme Court, the attorney general’s office, the comptroller’s office, and the CNE – were elected during Correa’s tenure in office. These people would not toe the line drawn by Moreno, who was eager to drive a policy of privatization, of revenge against Correa, and of the destruction of public institutions.

Moreno began to consolidate his authority by aligning his political forces with those of the right wing, such as Lasso’s Creating Opportunities (CREO) party and the Social Christian Party (PSC). Having produced his right-wing majority, Moreno went to the people with a dubious referendum that had seven confusing questions. The most garbled ones were about constitutional reform, namely, to set term limits for elected officials (targeting Correa) and to replace the heads of the state institutions. The other questions – on corruption, children’s rights, and ecology – had broad support across the country. The majority voted yes, essentially voting for the good parts of the referendum while the ugly parts slipped by.

To enact the reconstruction of the state institutions to suit his aims, Moreno appointed Julio César Trujillo to drive out the elected officials and put in place Moreno’s favored people; a fragile republic was slowly gutted. Trujillo used all kinds of anti-constitutional fictions – such as the “constitutional vacancy” – to put Moreno fundamentally in charge. Using the new powers, Moreno appointed his people and those of his allies (such as CREO and the PSC) to control the CNE; the presidency of the CNE was given to Diana Atamaint, a member of the Pachakutik Plurinational Unity Movement, the party of Yaku Pérez.

On January 30, the Colombian magazine Semana published a story that accused Arauz of receiving $80,000 from the ELN (National Liberation Army), a left-wing guerrilla group in Colombia; the story was also later published in the Argentinian paper Clarín. The report was purportedly based on information from computers seized from ELN commander Andrés Felipe Vanegas Londoño (aka “Uriel”). The Semana article was published three days after Moreno visited Washington, D.C., where he met officials of the US government, the International Monetary Fund (IMF) and the Organization of American States (OAS).

It took an ornithologist to point out that a video purportedly of armed ELN guerrillas in the “Colombian jungle” that was widely circulating on social media following the report by Semana is not credible. The birdsong in the video got the attention of Manuel Sánchez-Nivicela, who heard the sound of a pale-browed tinamou, which can be seen in Ecuador and Peru, but not in Colombia.

It’s not the first time the right wing has tried to delegitimize politicians on the left and other targets by alleging the latter are associated with Colombian guerrilla groups. In 2008, the Colombian periodical El Tiempo published a photo caption that seemingly linked Gustavo Larrea, a minister in Correa’s government, to the FARC, a Colombian guerrilla group; a London-based research organization – the International Institute for Strategic Studies (IISS) – claimed in a report that Correa’s campaign in 2006 was funded by the FARC (which Correa said was untrue). All of this was later retracted (the IISS no longer has the report on its website). In 2017, the Argentinian magazine Perfil published a report that tried to link the FARC with an organization called the Resistencia Ancestral Mapuche whose existence and connection to the Indigenous Mapuche community have been called into doubt; Argentina’s then-Security Minister Patricia Bullrich used this to push her government’s attack on the Mapuche community in Patagonia.

The Ecuadorian media generally took the story of Arauz and the ELN as gospel truth. It certainly made an impact on the election of February 7.

Right after the first round of Ecuador’s presidential elections, Lasso and Pérez began to collaborate to undermine the election results. They petitioned the CNE to conduct a recount; their objections and their demands were “beyond the law,” said Lasso. The CNE, already controlled by CREO, PSC, and Pachakutik, complied, eroding faith in the institutions. Rumors spread around Ecuador that Lasso and Pérez were eager to get the CNE to suspend Arauz from the process so that it would be the two of them who would compete in the second round.

There is no mystery that Lasso is a candidate of the right. Pérez, however, masquerades as an eco-socialist who would be the first Indigenous president of Ecuador. Curiously, before the election results had fully come in, Pérez announced that the US Embassy in Quito had called him to tell him that he would be the second-place candidate. He is on record saying that if elected president, he would be open to conducting a trade deal with the United States. The country’s main Indigenous organization – the Confederation of Indigenous Nationalities of Ecuador (CONAIE) – seems to have distanced itself from Pérez’s deal with Lasso because, as Leonidas Iza, president of the Cotopaxi Indigenous and Peasant Movement (MICC), said on Twitter, its base is “against the neoliberal right wing that looted the country”; to make an alliance with this wing is “illegitimate and inconsistent” with CONAIE’s politics.

On February 12, Colombia’s Attorney General Francisco Barbosa Delgado arrived in Quito to meet with Ecuador’s Attorney General Diana Salazar Méndez to discuss information that the Colombian government claimed to have received from the computers of the ELN’s Andrés Felipe Vanegas Londoño (who was killed in October 2020). Ecuador had requested this meeting based on the Semana story. Pérez came out in favor of an investigation.

The OAS, as it did during the November 2019 coup in Bolivia, began to sniff around with its representative – Isabel de Saint Malo (a former vice president of Panama who played a role through the Lima Group in trying to overthrow the government of President Nicolás Maduro of Venezuela) – saying that she was in discussions with Lasso and Pérez about the political situation.

On February 13, a day after he made a deal with Pérez, Lasso wrote to the CNE’s president saying that the agreement was illegal. He said that the CNE needs to first certify the results of the first-round vote and only then can there be a complaint filed by the candidates. The deal seems to be floundering as Lasso, who is less than half a point (.36 per cent) ahead of Pérez, probably calculates that he can defeat Arauz in a runoff election without a recount.

Will Ecuador have a second round on April 11 with Arauz on the ballot, or will the US, the OAS, the various right-wing parties in Ecuador, and Moreno’s state apparatus ensure that he will be off the ballot? If that happens, it will be hard to call the event of April 11 an election. •

Pilar Troya is a researcher at Tricontinental: Institute for Social Research. She is an Ecuadorian anthropologist interested in the feminist movement and social public policies, especially concerning gender equality. She served as a member of the board of Ecuador’s former Women’s National Council (CONAMU), an adviser to the Ministry of National Planning, and an adviser and deputy minister in the Ministry of Higher Education, Science, and Technology.