Saving the middle class has become fashionable again. With alarming regularity, opinion pieces in the country’s leading newspapers, magazines, and online media call for the reorienting of Canadian state policy around this elusive goal. Despite (or because of?) the shared commonsensical tone adopted in such commentary, explanations of the middle class, or indeed of social class in any sense at all, are vanishingly rare.

In all of these senses, Max Fawcett’s recent Walrus article, “How to Save the Middle Class,” draws the same useless cookie cutter from that old, cluttered baking drawer of mid-brow Canadian journalism. Fawcett’s use of “middle class” is symptomatic of the kind of political diversion typically enabled by this concept. In wrestling with the “inherently amorphous nature” of the category, he gestures at income, status, life-style, success, and aspiration, before settling principally on issues of consumption and home-ownership. The “upper class,” from this perspective, has more of these things, and the “lower class” fewer. 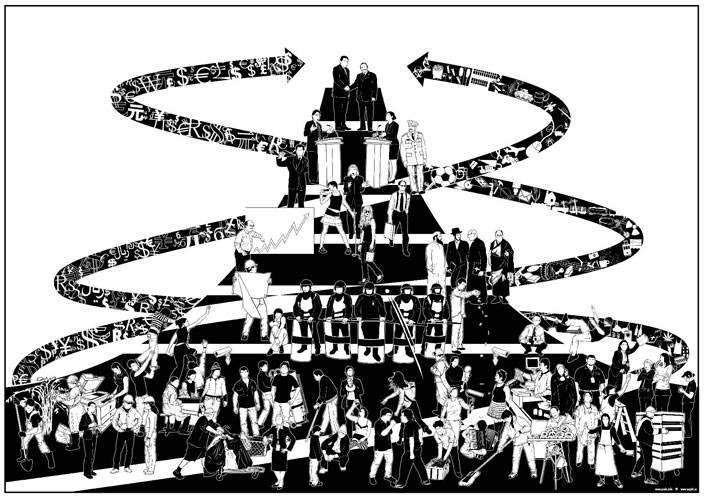 In this kind of accounting, the overwhelming bulk of us seem to be middle class. Production seems not to exist. Conflictual polarization is absent. Talk of exploitation is nowhere to be heard. Tired tropes of the new economy abound, while capitalism disappears from the stage altogether.

Such a static taxonomy is not the best way to understand social class in capitalist societies like ours in Canada. Capitalism is fundamentally based on an exploitative relationship between the producers and appropriators of society’s wealth. It is a socio-economic system rooted in the production of goods and services for sale on the market in order to make a profit. Capitalism is rooted in a principal social division of labour between those who own the means of production (capitalists) and those with nothing to sell but their capacity to labour (workers). Capitalists constitute a tiny minority of our society, and workers the overwhelming majority. Most of the “middle class” in this style of journalistic commentary is actually working-class. Understanding this correctly has political consequences.

Both capitalists and workers are market dependent in different ways. Capitalists seek to produce saleable goods and services for profit (more wealth) by mixing the means of production that they own together with labour power that they purchase from the labour market. Workers, in turn, must try to sell their ability to labour to capitalists in exchange for a wage in order to gain access to the means of life, such as rent, clothing, and breakfast, which in capitalist society are commodities (buyable and saleable goods and services) acquirable only through money.

Horizontally, there is competition between capitalists which forces each one to try to drive down the costs of production (including wages and health and safety measures) in order to remain profitable. Vertically, there is a conflict of interest between capitalists and workers. For example, at the typical worksite a worker will want higher wages for less intensive work and more autonomy over what they are doing, while a capitalist will want them to have lower wages for more intensive work and managerial oversite to make it happen.

Public sector employees are also part of the working-class, labouring for a wage in sectors such as public education, healthcare, and government administration. They are not directly exploited by capitalists, but they suffer similar threats of unemployment, falling wages, and de-skilling, which are all very much a product of the overarching pressures of the capitalist economy. Their livelihoods and well-being, like those of workers in the private sector, are similarly threatened by state austerity measures and pressure from employers to intensify their work.

The working-class is segmented by differences in privilege, autonomy, income, skill, workplace hierarchy, and educational credentials, as well as divided by forms of oppression such as gender, race, and sexuality. State managers and capitalists stoke these divisions and encourage workers with graduate or professional degrees to see themselves as middle class rather than working-class.

But however privileged or skilled, such workers are still wage-labourers, under constant pressure of losing what privileges they temporarily enjoy. The common notion of resetting our understanding of middle-class life around personal sustainability prompts relatively privileged workers to find individual solutions to their increasing indebtedness, as well as the anxieties they feel in the face of growing precarity in the labour market. The standard opinion pieces on the middle class encourage relatively privileged workers to change their aspirations and notions of happiness.

If this layer of workers were rather to see themselves clearly as wage-labourers, they might be better able to understand the commonalities they share with the rest of the working-class. Collective solutions such as unionization and striking for better working conditions and dignified pay would take the place of individual “solutions” such as frugality and psychological accommodation to austerity.

All of this has long been true. But there is an especially heightened perversity to talk of “saving the middle class” in the present pandemic moment – when the disposability of working-class lives, and particularly racialized working-class lives, has rarely been quite so nakedly on display. •

Jeffery R. Webber teaches in the Department of Politics at York University, Toronto. Webber sits on the editorial board of Historical Materialism. His latest book is The Last Day of Oppression, and the First Day of the Same: The Politics and Economics of the New Latin American Left. He is co-author, with Franck Gaudichaud and Massimo Modonesi, of Impasse of the Latin American Left, forthcoming, Duke University Press.