On January 1st, 2021, when the world was celebrating the new year, 75 Palestinian workers at the Israeli settlement factory of Yamit Sinoun started an open strike demanding the company to respect their rights. The company produces water filtration systems for the global market and the striking workers demand human-like working conditions, better wages, paid sick leave and holidays, and a pension fund that preserves their money. For seven days of strike in a row, the company refuses to meet these demands. 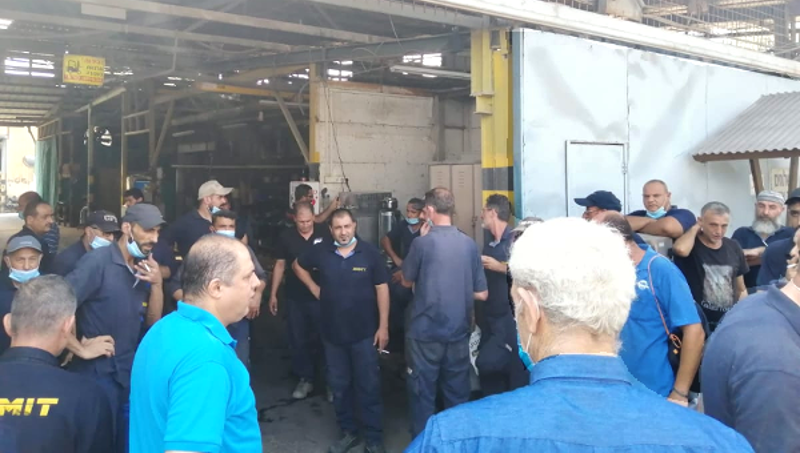 This strike is not the first of its kind; rather, it comes as a response to the Yamit corporation’s refusal to abide by the terms of an agreement to negotiate with workers following a strike they carried out for 20 days last November.

Prior to that, in 2007, the workers held a strike to demand higher wages and the provision of awareness raising workshops about how the workers should protect themselves in their dangerous workplace. This strike was preceded by another one in 1998, where the workers demanded basic rights such as an improvement on the dire working conditions and being provided with protection for them at work.

The current strike is being coordinated by a committee of five workers working in the factory and supported by the Palestine New Federation of Trade Unions;

Khalil Shehab, one of the striking workers and a member of the workers’ committee leading the strike has been working in the factory since 1995. He commented:

“Although this is not the first strike of its kind, the arrogant Israeli employer has been refusing to give us the same rights Israeli workers enjoy. We are carrying out this strike because we want to be treated as humans rather than as chattel slaves with no rights. We are not slaves as the era of chattel slavery has ended. Our demands are simple and basic. We need protection at the dangerous workplace, especially amid the spread of the COVID-19 pandemic, paid sick leaves and holidays like Israeli workers, higher wages and a pension fund that ensures that our money is kept for us until we retire. In 2016, the company forced us to sign an agreement that has frozen the contribution of more money to our pension fund; the frozen amount of money was about a million dollars. We realized afterwards that the company has spent half of our frozen pension money.”

We Are Humans, Too!

‘NO’ in capital letters was the written response Yamit sent to all of the workers’ demands. Worse than this, instead of raising the workers’ wages as part of the demands, which are below the minimum wage rates since decades, the company has decided to decrease their wages. Any protest by the workers to these new decisions, the company declared, will cause them losing their jobs.

Ofer Talmi, the striking workers’ employer shockingly justified the rejection of the workers’ demands in a letter he sent to the organizers of the strike entitled “Everything is genetics and education”. In this letter he explains how his refusal to give Palestinian workers their rights is not only motivated by capitalist interests to reduce production costs but is fundamentally based in his supremacist conviction that Palestinians are inferior and cannot have equal rights. He states (our translation from Hebrew):

“Workers who work 25-30 years at an employer are satisfied workers.

“They are not exploited.

“If they thought they were exploited they would have found another job, though decency and honesty make me add that the options for them are smaller than for Israelis. […]

“I am sorry I don’t have a hi-Tech company that produces computer chips. And you know what? If I did have one of those, Palestinians wouldn’t be employed in it.

“Every employee making more than minimum wage will be fired and in his place another cheaper one will come and we will teach them the skills.

“Because the employees do not have an Israeli ID and they are not foreign workers like those from Thailand and other countries. And another thing, they work in a company I own, someone who knows “the land of Israel belongs to the people of Israel” and I will not allow a Palestinian worker to get attached to the state of Israel in any way. […]

“Remember, no Palestinian workers will work in Yamit under Israeli law. It really doesn’t matter what the law or court says. If the court decides I must work under Israeli law, I will fire them all.”

“Inhumane acts… committed in the context of an institutionalized regime of systematic oppression and domination by one racial group over any other racial group or groups and committed with the intention of maintaining that regime.”

Mohammed Blaide, the Secretary General of the Palestine New Federation of Trade Unions said that “through this strike, the workers demand rights they asked for in previous strikes ignored by the company.” Blaide added that “this strike must continue; if the workers lose this battle, the consequences will cost the workers their source of income making them starve amid the strangling Palestinian economy due to the long-standing Israeli apartheid practices.”

Yamit Sinoun is located in the industrial zone of Nitzanei Shalom, which is home to 12 Israeli chemical factories built on stolen Palestinian land in Tulkarm.

Industrial zones are considered a foundation of the Israeli economy, especially the economic prosperity of the illegal settlements nearby the industrial zones, while de-developing the Palestinian economy and increasing the exploitation of Palestinian labour, land and natural resources. Industrial Zones in Area ‘C’ of the West Bank generate profits for Israeli and multinational corporations. The planned erection of more industrial zones in the West Bank would only undermine the development of the Palestinian economy and increase its dependency on the Israeli one.

Industrial zones that are built nearby Palestinian towns and villages have grave effects on their lives and on the environment. The chemical waste and emissions of the factories located in these zones have led to the ruining of the agricultural lands around them, ground water and air pollution. This has increased disease rates, including respiratory diseases, eye infections and cancer.

According to Blaidi, the Palestinian workers in Yamit make equipment that are used by Netafim and exported to different parts of the world. 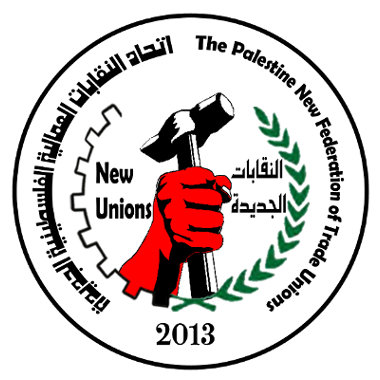 Netafim was established in 1965 in Kibbutz Hatzerim – an Israeli agricultural settlement in the Naqab, shortly after Israel had concluded the expulsion of most of the Palestinian Bedouin communities from the area. It works with several settlements in the Jordan Valley, Hebron and beyond to develop technology to ensure they make the best profits from the stolen land. Netafim has been able to sell its brand as a global leader in sustainable agriculture to 25 countries across the world, while, in fact, it plays a key role in sustaining illegal agro-business settlements on stolen Palestinian land and fed with stolen Palestinian water.

In addition to Netafim, the following multinational companies deal with Yamit:

The company has contracts with companies and municipalities across the globe.

Commenting on the corporate complicity with the exploitation of the striking workers, Blaide said:

“Many Palestinians have no choice but to work in Israeli corporations due to the systematic Israeli de-development of the Palestinian economy; thus, part of supporting Palestinians’ strike and their rights at Israeli corporations is to boycott Netafim and to call on all multinational companies to stop any business with Yamit and other companies operating in settlement industrial zones across the West Bank. The boycott of these companies should also be part of a wider vision to dismantle Israel’s apartheid system, with Yamit company as a micro model of this system, so that our workers do not have to work for Israeli corporations in the first place.”

To exert pressure on Yamit company to respect the workers’ rights, the Palestine New Federation of Trade Unions urges the International Labour Organization, International Trade Union Confederation and trade unions around the world:

(1) to work together with farmers unions, social movements and governments to hold Netafim accountable and stop any business with the corporation.

(2) ensure none of their pensions funds invest in corporations listed in the United Nations Database of Businesses engaged in activities related to Israeli settlements released on 12 Feb. 2020 and oppose any dealings with the companies.

(3) mount effective and urgent pressure on their governments to recognize Israel as an apartheid state according to the UN definition of the Apartheid Convention (1973) and call for the reactivation of the UN Special Committee against Apartheid.

This article first published on the New Unions website.