The Class Struggle Against the Pandemic

Kevin Courtney, joint General Secretary of the National Education Union (NEU), summed it up when he said, the best response to the Tory pandemic disaster is to join a union and join the Zero Covid campaign.

Talking at a 400-strong online conference, he paid tribute to NEU and Unison members who had followed union advice and sent Section 44 letters to their heads saying they would not be going into schools because they were not safe. “It was not a victory,” Courtney stressed, “but it was the right thing to do.” 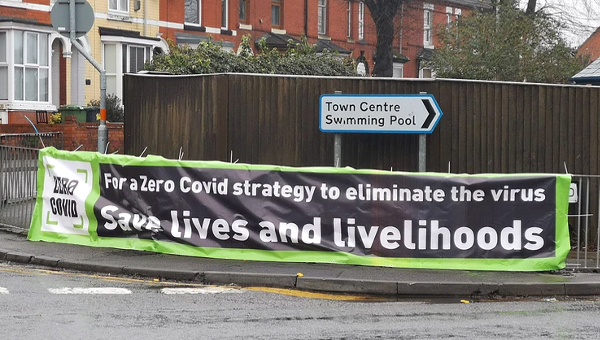 It was the right thing not just for health reasons, but economic ones too. It is the greatest health crisis in our lifetimes, explained Labour’s Diane Abbott, but also a massive economic crisis – one made much more protracted and severe by government failure to pursue a Zero Covid strategy. Many participants stressed the false dichotomy ‘health or wealth’ peddled by the Tory Right, while others emphasised the link with environmental destruction.

From the outset, instead of pursuing an ‘elimination’ strategy (like the way in which measles or polio were dealt with in the past), the Tories went for limited measures, too little, too late, in cack-handed efforts to ‘control’ the pandemic. Michael Baker, the leading New Zealand epidemiologist who opened the conference, spelled out the consequences.

New Zealand imposed a tough lockdown and is now in the clear. Britain did not and now has a higher death toll than ever. Total British fatalities are 260 times those of New Zealand, and still rising. They are a staggering 3,250 times higher than Vietnam’s, 4,300 times higher than Thailand’s, and 6,500 times higher than Hong Kong’s. These latter are among the countries that adopted a Zero Covid elimination strategy, a point stressed by Labour Campaign Group MP Richard Burgon. They have proved it works. And that way you minimise the economic damage and get society working again.

Susan Michie from UCL and Independent Sage highlighted the continuing failure of the Boris Johnson regime to take effective action: the numerous non-essential businesses still open; the lack of effective test, trace, and isolate; the lack of sanctions on employers; the lack of support for people economically impacted. The consequences are inevitable, with people going to work for fear of dismissal or loss of pay, and people avoiding getting tested because they cannot afford to self-isolate.

The Tories are responsible for around 100,000 deaths, but still have no coherent and effective strategy. So, argued Michie, they opt for a “blame and punish approach,” where people are encouraged to scapegoat others for flouting the rules and spreading the disease.

Others talked of the sickening Tory sleaze, the corrupt crony capitalism. “They’ve given away millions to their mates,” argued Janet Newsham, a health-and-safety at work activist from the union-backed Hazards campaign. Meantime, eager to keep the corporate machine running, “they’ve ignored workplace transmission” because “government policy is profits before people.” Like so many speakers, she issued a call to arms: “We remember with heartache our dead, but we will continue to fight for the living.”

A central theme of the conference was the universal nature of the crisis. Ann Galpin of the TUC Disabled Workers Committee spoke of the impact on disabled people and the ‘othering’ of those labelled ‘the vulnerable’. Jim Harte, a union activist at BAE Systems on the Clyde, spoke of the indifference of employers to health and safety. Diane Abbott talked of the impact on students and the way in which the pandemic has highlighted the marketisation of universities, with students sent back onto campuses before it was safe because the priority was fees and rents – not health, not education, but revenue streams.

Hector Wesley from BARAC (Black Activists Rising Against Cuts) focused on the widening inequalities, with BAME people disproportionately impacted. And, looking ahead, he argued that we don’t want a ‘return to normal’; we have to pose the question, what sort of society do we want coming out of the pandemic? Conference participants also raised the need to work around the way the pandemic has increased women’s ‘double burden’.

The conference was a model of how things should be done. We should pay no heed to sectarian calls for alternative campaigns that are simply party fronts. The Zero Covid campaign is a model of what socialists call ‘a united front’. It unites scientists, health professionals, trade unionists, left politicians, essential workers, and ordinary activists. It is organised to maximise participation. It is democratically run. It is not the property of a political cabal. It is the property of everyone who gets involved.

The conference proved it. The Zero Covid team had assembled a powerful panel of speakers – ranging from health experts to rank-and-file activists – but they had organised breakout groups designed to give everyone a voice. It could not have been better managed. What possible argument could there be for building rival campaigns?

The Zero Covid campaign provides the essential framework for co-ordinating mass resistance to what is, effectively, a class war by a neoliberal corporate regime that has put profit before people throughout the year-long pandemic. Everything the Johnson regime does reeks of naked class interest.

We have our work cut out. The breakout groups and the report-backs gave activists an opportunity to share experiences, problems, and ideas. Some spoke of the relationship between the pandemic and the wider ecological crisis. Some of the mistrust of governments and ‘experts’, of the way this was providing the anti-vaxxers and conspiracy theorists of the Far Right with a handle.

Others raised strategic questions about the best way to organise. Should the emphasis be on pressurising the government or taking action from below; or should it be both? What should be the role of the new informal unions trying to organise precarious workers, including undocumented migrant workers who may be unable to get vaccinated? There was an enormous amount of energy that will be built on over the weeks ahead.

How do to build effective local campaigns? A well-attended Scotland breakout group floated the idea of a Zero Covid Scotland conference, but the Wales breakout was too small to take any initiative, so there is work to be done there pulling together an effective campaign.

We need Zero Covid campaign groups everywhere – in workplaces, on campuses, in every town or suburb, wherever we can bring activists together to fight to protect our people, ordinary working people, the great majority, against a neoliberal corporate regime whose negligence, incompetence, corruption, and lying have given us a ‘world-beating’ death toll. This conference was a fantastic launch-pad for moving the struggle onto a whole new level. •

This article first published on the Anti*Capitalist Resistance website.