Reeling from the US election, I hope that the first order of business is reuniting families and restoring children in Immigration and Customs Enforcement (ICE) custody to their parents. A society that can locate possible ice on the moon, whose drones can locate a teenager in Yemen for targeted assassination, can surely use DNA, and compassionate and persistent outreach to find thousands of parents? 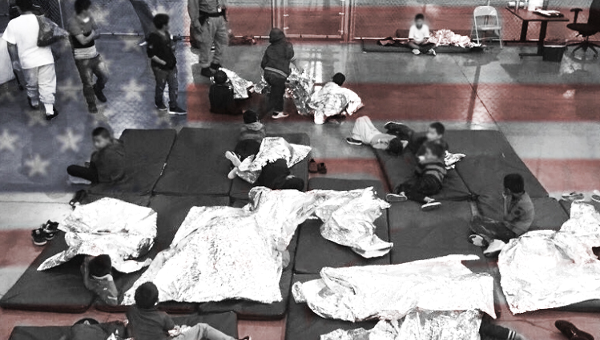 These have been years of reeling about the treatment of children: Madeline Albright’s justifying the killing of half-million Iraqi children, Obama’s paying the Mexican government to keep refugee children from the US border at the exact time of the Ayotzinapa disappeared children, residential schools for indigenous children, Israel’s hugely disproportionate killing and intentional maiming of Palestinian children. And now, a report finds more than 25,000 migrant children locked up for more than 100 days over past six years. The United States is sterilizing women who are in refugee detention centers, robbing them of being able to bear children.1

“…at least 250 migrant infants, children and teenagers have been locked up for nearly a month without adequate food, water or sanitation at a Border Patrol station in Clint, Texas, near the city of El Paso. Lawyers who visited the facility described a scene of chaos and sickness, with children unable to shower or change into clean clothes for weeks on end. The AP report came the same week that the Trump administration argued in federal court that the government is not required to provide toothbrushes, soap or beds to children detained at the border, and other reports found similarly squalid conditions at a number of immigration jails.”

A worker who found the treatment of children unbearable spoke about rules that prohibited distraught siblings from hugging each other for solace.

See and hear this video of young children crying for their mothers and fathers as they are separated by customs officials. Such hardness of heart is not hardwired in human nature. Think of the global response to the death of Syrian toddler Alan Kurdi.

Children suffer profoundly from separation and loss. Children differ from adults in ways that make separation much more devastating. They require continuity of care and need the constant, uninterrupted presence and attention of a devoted, caring adult. As well, children’s needs constantly change. In earliest childhood, sudden loss of a parent may cause severe withdrawal, failure to thrive, even death. Only slowly do children develop the ability to keep a stable, constant image of their parents in their mind – so at first, or when overcome by fear, “out of sight is out of mind,” meaning that they may not be able to draw on the memory and image of a caring parent when they are overwhelmed with distress. Only gradually do children come to feel that they can have some control, some predictable way of communicating their needs. Children slowly develop a realistic sense of time, so even a brief separation can feel like forever. It is immensely difficult for children to understand the physical, social, and personal worlds, to decipher cause and effect, so they need adults who can help with the wishes and fears that affect their sense of reality.

In 1920 Freud wrote about very young children’s worries about losing their mothers. His grandson repeatedly played a game involving going away and coming back. This is similar to hide-and-seek and peek-a-boo. In this play children are able to feel in control of coming and going. Adults often express this need for connectedness in their attachment to special mementos, an amulet, a photo that they always carry with them. People of all ages can experience panic about loss of a crucial connection. Are children in detention able to keep hold of a special object that connects them with their parents? It is possible that nothing in the detention setting allows them to feel in control. This same experience of extreme dislocation and loss must have been what African slaves felt in the Middle Passage across the Atlantic, torn from everything they knew.

In this culture there appears to be an inability to “see” suffering or to feel with or for the children or for their parents, while refugee parents must feel for their children very deeply to take such an enormous step to relocate under precarious and dangerous conditions. In Canada, tens of thousands of indigenous children were stolen from their families and placed in residential schools run by the state and by Catholic, Anglican, Presbyterian, and United churches. Many children died or were severely abused. The adults involved said they did not know better and thought they were civilizing the children. Attachment research and the devastating effects of early separation and maternal deprivation had been known for decades.

Coinciding with neoliberalism is a psychological shift from understanding human beings to managing and quantifying human resource. Missing is everything encompassed by “soul”. Steven Salaita was blacklisted from teaching in American universities after he wrote of feeling overwhelmed by the killing of 551 Gazan children in the 2014 Israeli assault (in which one Israeli child was killed). The image of children’s bodies kept in ice cream freezers as the morgues were full hit him profoundly, knowing that living children love ice cream and now they were entombed in the freezers. Netanyahu was not blacklisted – he said that the Palestinians just wanted telegenic images of their dead children as a propaganda-resource.

Possibilities for Children and Families

What are the possibilities for immediate restoration of children to their families? In child cases, it has been documented that the state often intervenes when it should not, but does not step in when extreme threat to a child is obvious.2 Individuals in institutions can refuse to follow orders. Has anyone slipped the children toothbrushes, or held and consoled them? Teachers in Washington refused to give children standardized tests, and Connecticut librarians refused orders to snoop on people’s internet usage as part of anti-terrorist hysteria. When he was psychiatric director in the Massachusetts prison system, James Gilligan fired staff who were disrespectful or violent toward prisoners and he completely reformed the system. Systems can rapidly and radically change. Finding “lost” parents and relatives has worked for decades. 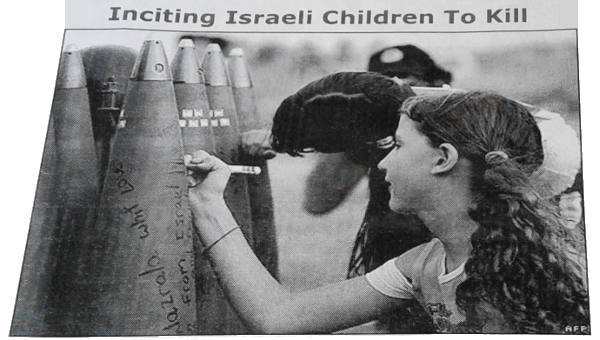 Who are the perpetrators and collaborators? I once met a boy whose family was under the surveillance of border security, so the agents felt free to intrude into and search the children’s personal spaces whenever they wanted. The boy was humiliated and enraged and said to his vivid image of the agent, “Who ARE you?” At the end of his documentary about Israel’s inculcating Jewish youth with homicidal Samson and Masada ideals, the director Avi Mograbi confronts soldiers who are checkpoint gatekeepers. “When will you open the gate so children can go home from school?” The soldier says he doesn’t have to answer questions and “who are you to lecture us?” Mograbi replies, “Who am I? Who are you? Who are you?…Do your job, open the gate! Look at yourselves! Look what you’re doing to yourself! Blah, blah, blah, you hear that? That’s what I have to say to you: BLAH BLAH BLAH. Kids are waiting at the gate. You’ll neither open it nor say when you will.” The soldier shames Mograbi and says he hopes Mograbi has a son who hears what he is saying. His son heard and refuses to serve. Will people hear ICE children and their parents?

Dr. Seuss’s Horton Hears a WHO because he knows that “a person’s a person no matter how small.” •