Capitalism and Climate Change in Honduras

Honduras lies in tatters. Ecological catastrophes in the form of twin hurricanes have rapidly destroyed its pandemic-ravaged economy. At a press conference in Tegucigalpa, Honduran president Juan Orlando Hernandez said that his country already had 7% of its GDP wiped out by the pandemic, and that the combined impact of COVID-19 and two deadly storms will create a “bomb that will leave the country and the region in a very difficult situation.”

The first environmental calamity came in the form of the category 4 Hurricane Eta. It arrived on 4 November, 2020, and killed 60 people, seriously affected 3 million people (a third of the country), damaged more than 400 houses, and destroyed close to 173 roads. Agriculture authorities have stated that over 216,000 hectares of crops have been lost due to Eta, impacting small and mid-scale farmers. At least 8,994 families have lost their crops. Overall, it is expected that Eta will turn out to be a “multi-billion-dollar disaster” for Honduras. Damage estimates for Eta’s impact on the country are as high as $5-billion – over 20% of the nation’s GDP. 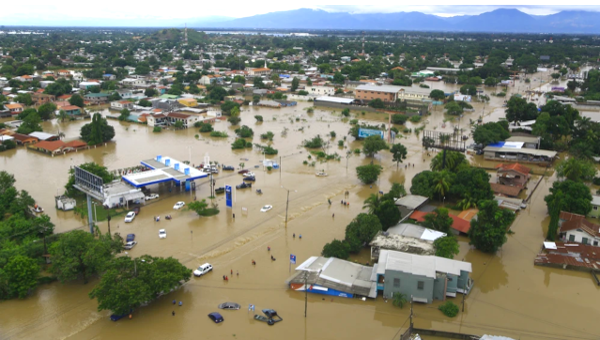 In the aftermath of Hurricane Eta, the number of COVID-19 infections has rapidly increased (as of Dec. 7th: 111,023 cases and 2,946 deaths). Tom Cotter, Director of Emergency Response and Preparedness at Project HOPE, says, “Hundreds of families affected by the hurricane are crammed into temporary shelters without masks to protect themselves, unable to keep physical distance, and without access to water to wash their hands… Collective shelters could become a breeding ground for a rapid spread of the virus, increasing vulnerability among a population already affected by natural disasters and the devastating effects of climate change.” Apart from COVID-19, there is a high possibility of the occurrence of diseases like dengue, zika, malaria, cholera, chikungunya, acute diarrhea, fungal infections, and influenza due to stagnant water and flooded areas.

Coming thirteen days after Eta, Hurricane Iota crashed through Honduras from 16-18 November, affecting another 600,000 people. Prior to the arrival of Iota, at least 55,000 people remained in 527 shelters, among them around 20,000 children. The toll on infrastructure included more than 28,000 homes battered, 32 bridges destroyed and 45 other bridges damaged. Due to these access constraints, over 105,000 people continued to remain isolated in 69 communities. Occurring in this context of pre-existing ruination, Iota was bound to be a cataclysmic event. It caused severe damage, particularly in the Sula Valley, the Department of El Paraíso, Olancho, and extending to western parts of the country, such as Copán and Ocotepeque. The impact of the hurricanes forced hundreds of thousands of people in the Sula Valley to evacuate flooded areas, causing an exponential increase in the population housed in temporary places.

Like Eta, Iota, too, wreaked severe damage on the agricultural sector. According to CARE Honduras Country Director Maite Matheu, “60-80% of basic grains have been lost. Coffee is one of Honduras’ main export products and 90% of coffee production in the country is done by smallholder farmers. Eta alone has left losses on the coffee crops of approximately 100,000 quintals. Iota had an impact directed at the growing areas and productive infrastructure, and the collateral damage due to high rainfall will mean greater impacts on the field. The effect this will have on income and livelihoods for people, especially the poorest in society, is unimaginable. Experts are already saying that it will take at least a decade for the country to recover from this.”

Global Capitalism and the Climate Crisis

Climate disasters like the one occurring in Honduras are directly linked to the wider processes of global capitalism, which have produced ecological destabilization on a planetary level – manifested in extreme weather, species extinctions, drought, desertification, landslides, receding coastlines, floods, and hurricanes. Since records began being kept in 1851, this is the first time two major hurricanes have formed in the Atlantic basin in November. This is because of the acceleration of the global water cycle caused by excessive greenhouse gases in the atmosphere. Climate models indicate that by 2100, the number of Category 5 storms will increase 85% globally and 136% in the Atlantic. Furthermore, a study published in Nature reports, “as the world continues to warm, the destructive power of hurricanes will extend progressively farther inland.”

Countries of the Global South are disproportionately affected by climate change due to the fact that global warming hits the hotter, low latitude, tropical, and subtropical regions of the earth especially hard. These countries are also generally poor due to imperialist factors such as underdevelopment, mal-development, poverty, corruption, and inequality which amplify each extreme weather event into social tragedies as communities suffer displacement, hunger, and heightened precarity. As Noah S. Diffenbaugh and Marshall Burke put it in an article, “there is growing evidence that poorer countries or individuals are more negatively affected by a changing climate, either because they lack the resources for climate protection or because they tend to reside in warmer regions where additional warming would be detrimental to both productivity and health.”

To take the example of Honduras itself, in 2019, the Germanwatch Global Climate Risk Index ranked it as the second country most affected by extreme weather events, signaling vulnerability “where extreme events will become more frequent or more severe due to climate change.” These climate risks were worsened by neoliberal capitalism and imperialism, which prioritized capital accumulation over measures aimed at combating climate change. As a result of capitalism’s drive toward endless profit-maximization, Honduras is today witnessing utter havoc: together Eta and Iota have killed around 100 Hondurans, and it is expected that the two hurricanes will cost Honduras $10-billion.

Since neoliberal capitalism reigns supreme in Honduras, climate disasters have been allowed to spill over into the health sector, thus worsening the current epidemiological crisis. According to the ministry of health, about 2.5 million people currently have limited or no access to health services due to damages in health infrastructure. Some 37 health facilities have been damaged, 27 health facilities are out of service, and at least 10 health centres have reported losses in the cold chain, equipment, supplies, and vaccines, impacting around 114,236 children who will miss out on vaccination.

With the latest rounds of hurricanes in Honduras, the urgency of an eco-socialist revolution has been again foregrounded. Mad profit-maximization and deliberate blindness toward planetary-environmental boundaries are the defining characteristics of capitalism, and if humanity is to have a future at all, socialism has to be established. Instead of caring for the poor and displaced, capitalism utilizes disasters to further consolidate the power of the bourgeoisie. For instance, in the aftermath of the 1998 Hurricane Mitch in Honduras, the Canadian mining lobby held relief hostage until pro-mining reforms – which were intended to legalize open-pit cyanide mining, permit forced expropriation in the case of social conflict, reduce taxes on mining, and establish no limits on water use – were passed. Such cases of profiteering explicitly indicate the fundamentally inhumane nature of capitalism and reiterate the slogan raised by Rosa Luxemburg: socialism or barbarism. •