What Today’s Left Learned From Ottawa’s Turn to Repression

Fifty years ago this month, the federal government, invoking the War Measures Act – its first use in peacetime – occupied Quebec with 12,000 troops, arrested almost 500 citizens without a warrant, and carried out 36,000 police searches of homes, organizations and publications.

Of the 497 trade unionists, artists, lawyers, and left activists jailed, 435 were subsequently freed without charges, and 44 of the 62 charged were acquitted or had their prosecutions stayed. But October 1970 marked a turning point in the federalist response to Quebec’s “Quiet Revolution” and the rapidly growing popular mobilization in favour of making Quebec an independent state. 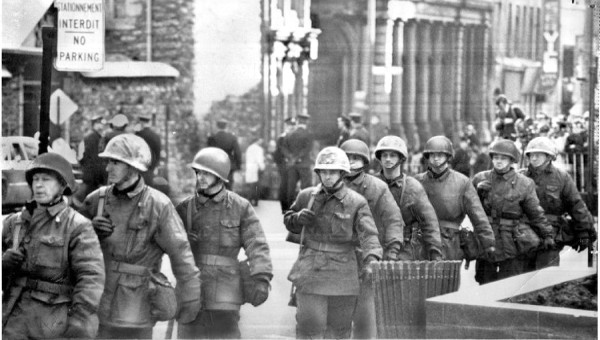 The immediate pretext for these draconian acts were the kidnappings of a British trade commissioner and a Quebec cabinet minister by the FLQ (the Front de libération du Québec), a small band of revolutionary-minded youth – even though the police involved in the hostage search said so many arrests simply complicated their task.1 This was soon followed by Ottawa’s fraudulent claims that it was actually suppressing an “apprehended insurrection” led by Parti Québécois leaders René Lévesque and Jacques Parizeau, along with Claude Ryan, then editor of Le Devoir, the only Quebec newspaper that opposed the war measures repression. Their crime: they had called on the federal government to negotiate the release of the hostages by their kidnappers.2

The Victims of War Measures Act

An immediate victim of the repression was the FRAP, the Front d’Action Politique, a municipal party founded by trade unions and community activists that was confronting Montréal mayor Jean Drapeau’s autocratic administration around a program of radical social reform and participatory democracy.3 The FRAP was polling up to 35% support leading up to the city election in November 1970. Drapeau joined with Quebec premier Robert Bourassa in asking for federal intervention. Although federal minister Jean Marchand described the FRAP as a “front” for the FLQ, the municipal party made clear that, while it was sympathetic to the demands in the FLQ’s manifesto, it did not support its methods. In the election held under military occupation, the party did not elect any of its candidates, although it still managed to poll an average 18% in the districts it contested.

But Ottawa and its provincial and municipal allies had bigger targets in mind. Chief among these was the PQ, which in the Quebec elections earlier that year had won 23% of the popular vote, although getting only seven seats and its leader René Lévesque being defeated. Founded in 1968, the PQ sought sovereignty for Quebec albeit in “association” with the Rest of Canada. Its strategy was in part shaped by the pattern of federal-Quebec relations throughout most of the 1960s, i.e., Ottawa responding with concessions at each stage to increasing Quebec demands for autonomy. Quebec desires for recognition going beyond its status as “a province like the others” were met with ongoing negotiations in search of constitutional adjustments (the Fulton-Favreau formula). When the Canada Pension Plan (CPP) was established, Quebec was allowed to constitute its own plan, the QPP, and to use the invested pension funds to build a Francophone bourgeoisie through the Caisse de Dépôt et Placements. A federal royal commission on “Bilingualism and Biculturalism” published detailed studies on the inferior ranking of Francophone Quebeckers in Canada’s economic and social order and proposed a reworking of Confederation to recognize the “equality of the two founding peoples.” Quebec was even given some representation in international diplomacy.

The PQ leaders hoped to push this further with their quest for sovereign status within a fundamentally reorganized pan-Canadian state that would afford them space in which to build an independent Francophone bourgeoisie, “Quebec Inc.,” looking primarily to the Quebec government to defend its interests.

However, with the election in 1968 of Pierre Trudeau as federal Liberal leader and prime minister, Ottawa’s approach veered sharply toward confrontation with Quebec. The Bi-Bi commission was shut down. And Trudeau seized on the FLQ’s actions to inflict some lasting political damage on the PQ and set the scene for strengthening the federal state in the face of the “separatist” threat. Successor legislation to the War Measures Act (introduced by the recently deceased John Turner, the Justice minister) reproduced most of the Act’s features and laid the basis for establishing a new security police force, as recommended by the Royal Commission on Security in 1968.4 During the 1970s, the RCMP’s Security Service engaged in break-ins, thefts of PQ membership lists and the files of left-wing publications, fingered left activists to employers and landlords, and even firebombed a barn frequented by left activists.5 The scandal-ridden Security Service was later replaced by an “independent” agency, the Canadian Security and Intelligence Service (CSIS), which has recently added surveillance of Indigenous self-determination activists to its mandate.

A major step in Ottawa’s offensive was the 1982 “patriation” of Canada’s constitution, until then an Act of the British parliament. Overriding opposition from Quebec’s National Assembly, the new constitution included an amending formula that entrenched Quebec’s “equal” status as a province, not its reality as a nation, and imposed a Charter of Rights and Freedoms that was subsequently used by the courts to overrule key provisions of Quebec’s Charter of the French Language (Law 101). And the federal Liberals later helped to sabotage the Meech Lake Accord, designed to win Quebec’s assent to the new constitution, and still later, in the late 1990s and beyond, poured millions in federal funds into illegal campaigns to subvert Quebec nationalist expression (the “sponsorship scandal”).6

These “sticks” have of course been accompanied by the “carrot” of promoting major Quebec firms, especially in the engineering sector, through generous federal subsidies and legal protection to them in their many dubious transnational activities. Quebec Inc. is today characterized above all by its close interrelationship with Canadian, US, and other international capital. It can be relied on to oppose Quebec independence.

In 1998, the Supreme Court of Canada, responding to a request by the federal government for an opinion on Quebec’s right to “unilateral secession,” ruled (with little or no reference to previous jurisprudence) that while secession might be legal, provided it was determined by a “clear majority” on a “clear question” (both terms undefined) in a referendum, this would entail an amendment to the existing Constitution the terms of which would have to be negotiated among “all parties to Confederation” – meaning Ottawa and the other provinces.7 This was followed by adoption of the Clarity Act, which established that the federal Parliament alone would determine the “clarity” of the question and a possible majority in a future Quebec referendum. Ottawa continues to hold the upper hand; when Quebec Premier Philippe Couillard, a staunch federalist, attempted to discuss current constitutional arrangements in 2017, Prime Minister Justin Trudeau was quick to dismiss any attempt “to re-open Canada’s constitution.”8

Both referendums held by PQ governments conditioned Quebec sovereignty implicitly on a negotiated agreement with the federal regime. In 1980, voters were asked to support a Quebec government “proposal to negotiate a new agreement with the rest of Canada, based on the equality of nations.” In 1995, they were asked, “Do you agree that Quebec should become sovereign, after having made a formal offer to Canada for a new economic and political partnership….” Although it indicated that failure to achieve such an agreement within a year could trigger unilateral secession, the reality was that any such partnership or agreement remained purely hypothetical, and unlikely, to say the least.

In effect, the Parti Québécois longstanding strategy of creating a new sovereign bourgeois state in symbiotic partnership with Canada has been decisively undermined, although the party’s discomfiture has not yet resulted in the alienation of its major institutional allies such as the Quebec union centrals. Many years have gone by since the last popular mobilizations for sovereignty provoked by the demise of both the Meech Lake Accord and its follow-up, the 1992 Charlottetown Accord. In this sense, the shift in federal strategy that began with such dramatic effect in October 1970 was successful. This blockage of the traditional sovereigntist movement has understandably chilled pro-independence sentiment among Quebec’s population.

The PQ, its membership once a quarter-million but reduced today to just over 35,000, has reverted in recent years to an identitarian ethnic nationalism that fails to recognize, let alone accommodate, the polyethnic reality of modern Quebec. In the party’s recent leadership contest, all four candidates supported additional limits on immigration, and the party – along with its federal counterpart the Bloc Québécois – supported the Legault government’s Bill 21, imposing dress codes on public-sector employees, a measure aimed primarily at hijab-wearing Muslim women. As Québec solidaire activist Benoit Renaud says in his recent book, “This is a nationalism that is in fact content with the limited powers of a provincial state and is perfectly compatible with Quebec’s remaining in this Canadian state that consistently refuses to recognize us.”9

Independence and the Quebec Left

It is a quite different story on the left, however. As another QS leader François Saillant documents in his excellent new book Brève Histoire de la Gauche Politique au Québec, (Ecosociété 2020) since the 1960s, and particularly since the early 1980s, with the demise of the old Mao-Stalinist parties,10 the left in Quebec has tended to support Quebec independence largely because any progressive program of fundamental social change is unrealizable within the current federal regime. This central state has exclusive jurisdiction over finance, banking, regulation of trade and commerce, issuance of currency, foreign affairs, the military, criminal law, the appointment of judges of the superior courts, etc.

The provinces are generally limited to powers of a “merely local or private nature.” And Ottawa holds residual power over all matters not specifically allocated by the Constitution to the provinces, including Quebec. Thus it is a commonplace on the Quebec left to combine social emancipation with national emancipation.11

This is a lesson often lost on progressive opinion in English Canada, including by some Anglophone progressives in Quebec. Almost 20 years ago I attempted to explain this in replying to a critique of the Union des forces progressistes, a forerunner of today’s Québec solidaire. Although a bit dated on a few of its particulars, such as the level of popular support for independence, I think the substantive argument holds true today. It was first published in Canadian Dimension.12 •