What Happened to PPE Production in Canada?

On August 21 the federal and Ontario governments announced major subsidies for 3M Canada to expand its Brockville plant, and starting in early 2021, to produce 50 million N95 respirators each year for five years. This is an important step toward addressing the existing shortage of this much needed personal protective equipment (PPE). It is also an important step, in the face of global supply chain uncertainties, to create the needed capacity to produce them in Canada. However, it is not enough to remedy the current deficiencies in the supply chain and PPE policy requirements. 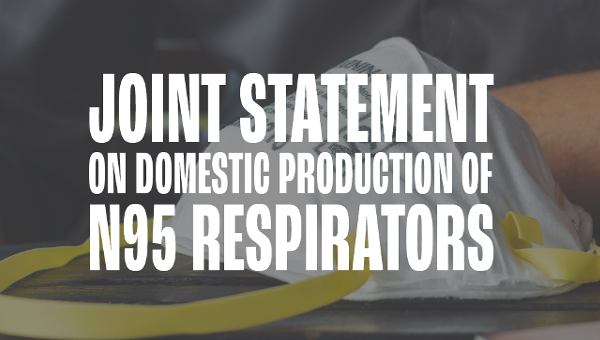 First, why will it have taken a full year from the time that news of a new virus first emerged at the end of 2019 to the launching of the Brockville production? After the SARS crisis in 2003, a Royal Commission made recommendations – called for by healthcare workers and their unions – to respond properly to the next epidemic, including by always deferring to the precautionary principle in dealing with health and safety risks to staff and the people they care for; by stockpiling N95 respirators and by reducing the percentage of part-time healthcare staff. In fact, during the COVID-19 crisis the precautionary principle was ignored, and the stockpile of masks expired. The percentage of part-time staff grew significantly during the period from 2003-2019 as healthcare budgets staggered to balance real cuts and surging population growth and aging. This contributed significantly to the unpreparedness this time.

Second, what will happen between now and when the new respirators arrive? The federal government originally ordered 154 million N95 respirators but has only received 61 million as of today, leaving a massive gap. This gap will become much worse if there is a second wave of the pandemic or if international supplies are cut off.

Third, what matters is not only the number of respirators produced, but access to them. Throughout this crisis the voices of the frontline workers and their unions have been neglected. Ignoring the ‘precautionary principle’ – in the context of uncertainty and great risks, the benefit of the doubt should lie with those whose health and safety is directly affected – employers (backed by the federal and Ontario governments) have often defined ‘needs’ narrowly to respond to supply pressures, thereby dramatically lowering the number of respirators officially required. A consequence has been that the share of total Canadian COVID-19 infections that include healthcare workers is among the highest in the world.

It remains remarkable in this context that there have only been ‘incentives’ but no direct pressure on companies to convert their facilities to address this social emergency. What has been needed in this emergency was not ‘subsidies’ and ‘incentives’ but decisive government action, comprehensive planning, and the use of emergency powers to mandate the conversion of manufacturing plants to prioritize public needs (much as would be done in a war-time emergency). The massive GM Oshawa facility, for example, does not need expansion, is already making surgical masks, and could be making N95 respirators quickly, since GM has already perfected the process and has been manufacturing N95s for the US government in its Warren, Michigan plant.

While we welcome the Brockville initiative, recent experience has made clear the dangers of relying on the goodwill of profit driven companies to effectively address critical social issues like healthcare. Therefore, we call on the federal and provincial governments immediately, to order General Motors to produce N95 respirators at its Oshawa facility and, as those nations most successful at protecting their populations and healthcare staff have done, treat the virus as an airborne virus and to protect life accordingly. •

This statement first published on the Green Jobs Oshawa website.

The Canadian Federation of Nurses Unions (CFNU) is the voice of nearly 200,000 unionized nurses and nursing students across the country.

Founded in 1982, the 34,000 member Ontario Council of Hospital Unions/CUPE is the hospital division of the 700,000 member Canadian Union of Public Employees.