The Police and Racist Vigilantes

Police in America, whose mottos claim to “protect and serve” us, have been openly declaring allegiance with the forces of white supremacy. It is no coincidence that this has become a hallmark of Donald Trump’s presidency. Trump defended Kyle Rittenhouse, the 17-year-old white suspect in the shooting deaths of two activists in Kenosha, Wisconsin, in the days following the police shooting of a Black man named Jacob Blake. Implying that the suspected shooter was acting in self-defense against Black Lives Matter protesters, Trump said, “He was trying to get away from them, I guess, it looks like… He probably would have been killed.” Later, in a Fox News interview, he defended police in a similar manner, saying they were “under siege” and using a golf analogy to explain why they routinely kill unarmed people: “just like in a golf tournament, they miss a three-foot putt.” 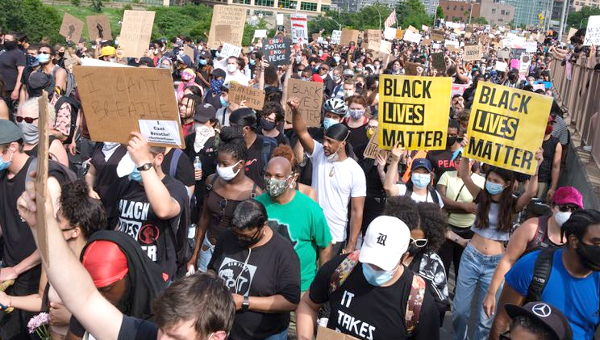 Across social media, those claiming to “Back the Blue,” and that “Blue Lives Matter,” have taken their cues from the president and declared Rittenhouse a hero. The 17-year-old idolized police. And they clearly felt comforted by the presence of his armed group.

In a video capturing their close collaboration, Kenosha police officers were seen going out of their way to ensure that Rittenhouse and the vigilantes that had gathered in their city had plenty of water. At the same time, they were enforcing the city’s curfew against someone else, announcing aggressively over a bullhorn, “You are a civilian. This area is closed to all. You are trespassing. Leave. Leave now.” Seconds later, the same officer is heard saying to Rittenhouse and his colleagues, “We appreciate you guys – we really do.” If ever there was doubt that police and armed white vigilantes see themselves as part of the same club, this interaction dispelled it.

Later, when the teenager walked toward police with his hands up soon after he allegedly shot protesters, officers ignored him, seeing him as no threat. Many have rightly questioned if law enforcement would have simply ignored a similarly clad Black teenager carrying a rifle that he was clearly too young to legally own.

Right-wing extremist armed vigilantes and police officers are cut from the same ideological cloth of American society that feels entitled to patrol the collective behavior of nonwhites, women, etc. While not entirely white and male, both police and armed vigilantes are largely white men. In urban areas in particular, research shows that law enforcement officers are far less racially diverse than the communities they police and are overwhelmingly male. They epitomize the white male authority that armed vigilante groups aspire to. When armed groups show up to protests, police embrace their presence and see them as allies.

A new report published by the Brennan Center for Justice explores the overlap between these two groups at length. Written by former Federal Bureau of Investigation (FBI) agent Michael German, it traces the history of American police, which is more relevant than ever today. “Slave patrols were among the first public policing organizations formed in the American colonies,” writes German. He adds, “Put simply, white supremacy was the law these earliest public officials were sworn to enforce.” Judging by police actions, especially over the last several months, this historical framework of policing appears to be intact hundreds of years later. Even the FBI has warned that “White Supremacist Extremism Poses Persistent Threat of Lethal Violence,” and German points out that in internal documents, the Bureau warns of the “active links” between extremist groups and law enforcement officials.

Trump is hardly responsible for creating the mess we find ourselves in. But he has ended the very modest police reforms that were put into place under Obama, and law enforcement has in turn signaled that it appreciates Trump. In fact, the National Association of Police Organizations, which had previously endorsed Democratic vice-presidential nominee Joe Biden in 2008 and 2012, has now switched its support to Trump.

What’s worse is that there are few elected officials offering us protection from racist police violence, let alone armed white vigilantes. It is no coincidence that so many fatal incidents at the hands of police have taken place in liberal, Democrat-run cities where politicians pay lip service to safety but give a free pass to police. Even in liberal California, the Democrat-dominated state legislature could not bring itself to strip officers of their badges when they commit crimes.

Within such a context, the disproportionate killing of Black Americans by police is rightly condemned as the ugly hallmark of a violently racist society. When Trump supporters claim that Black people are only killed because they resist instead of acquiescing to brutality, they conveniently overlook the fact that police manage to preserve the lives of white people who fight back when arrested.

From California to New York and everywhere in between, police treat Black and Brown people like target practice at best, and animals at worse. A Los Angeles sheriff’s deputy-turned-whistleblower has detailed the existence of a violent gang within the department called the Executioners, which he said requires aspiring members to kill someone or commit other violent acts as an initiation rite. Two sheriff’s deputies implicated in the shooting death of an 18-year-old Latino man named Andres Guardado were apparently prospective members of the gang. Guardado was shot five times in the back. In New York, a video emerged recently of Rochester police covering the head of a Black man named Daniel Prude with a hood and suffocating him to death. Prude was naked and defenseless in the middle of the street when he was killed like an animal.

These are only two examples out of countless violent incidents where police have claimed the lives of people of color. And such incidents are precisely why white conservatives support and defend police. They see law enforcement as keeping Black and Brown masses in check. They see their own armed groups as supplementary paramilitary forces to bolster law enforcement. And they see Trump, their president, supporting these cozy ties and close collaboration.

Against a well-armed police force linked to white supremacists, what chance do communities of color have at leading dignified lives free of police harassment, targeting, and killing? According to German, “the Justice Department has no national strategy designed to identify white supremacist police officers or to protect the safety and civil rights of the communities they patrol.” And this is precisely how Trump likes it. •