Oppose the Return to Fare Enforcement on the TTC

In Toronto, Jane Finch Action Against Poverty (JFAAP) has long made the link between transit fare enforcement and racism. TTCriders also connect transit advocacy and anti-racism, emphasizing that transit underfunding and transit enforcement has especially negative consequences for Black people. They reiterate their longstanding demand for adequate transit funding and criticize the TTC’s decision to reinstate fare enforcement on Toronto transit routes expected in July, a decision that will hit hard the essential workers who have faced both the pandemic and overcrowding, particularly on suburban bus routes. 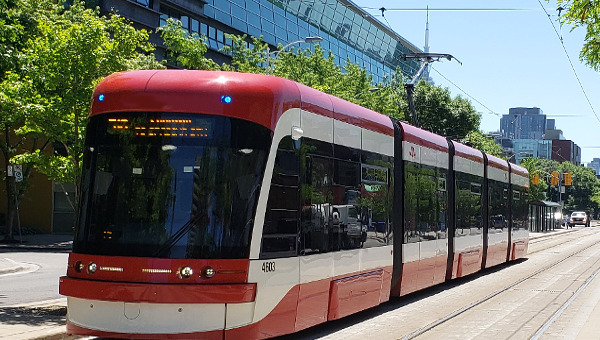 Like JFAAP and TTCriders, Free Transit Toronto opposes the return to fare enforcement.

Like many organizers across Toronto, Canada, and the US, we also support the demands to defund police forces that have proliferated across the globe following the revolts and mass mobilizations in late May and early June in support of Regis Korchinksi-Paquet, George Floyd, Adama Traoré, and countless others.

In Toronto, Desmond Cole, Sandy Hudson, and Robyn Maynard have all argued that a response to police violence and anti-Black and anti-Indigenous racism cannot stop at demands for police reform. It must concentrate on removing the various forms of leverage repressive state institutions and individual cops have at their disposal: budgets, arms, legal authority, protocols of engagement.

It is crucial to identify the leverage that makes aggressive and racist fare enforcement possible.

One is the existence of fare enforcement officers and the legal powers they stand on. The other is the fare itself. The addiction to fare-box revenues is a crucial factor pushing transit agencies to behave as if they were private businesses, prioritizing fare collection at all cost. For this reason, it is imperative to oppose fare enforcement by demanding free transit and increased transit funding to expand service levels.

Free Transit will not stop racism by itself, but it will eliminate one condition that puts not only fare enforcers but also transit authorities and workers in a structural position to police Black, Indigenous and other non-white people and to penalize poor people and low-income workers. And it will create the basis upon which new relationships can be built among transit users and transit workers.

In this spirit, we urge Torontonians to join us in our demands of the TTC:

In addition, we ask for:

Join our calls to action by phoning or e-mailing your city councillor and members of the TTC board, and become part of the growing movement for free transit in Toronto and beyond. •

End Anti-Black Racism on the TTC and Everywhere

“Transit will never be safe for everyone as long as police brutality remains a threat to Black lives” — statement from TransitCenter (US).

TTCriders joins in mourning the devastating loss of Black peoples’ lives at the hands of police. George Floyd, who was killed by a police officer on video in Minneapolis. D’Andre Campbell, who was killed by a police officer in Peel Region this April after he called for help. Regis Korchinski-Paquet, who died in the presence of police last week and whose family is demanding answers and justice.

We must work to dismantle anti-Black racism and white supremacy, which are pervasive in Canada, too.

We are inspired by the solidarity from transit workers in New York City and Minneapolis who have refused to transport police and arrested protestors to jail. Here’s part of ATU 1005’s recent statement:

“We have a saying: ‘NOT ONE MORE’ when dealing with driver assaults… We say ‘NOT ONE MORE’ execution of a black life by the hands of the police. NOT ONE MORE! JUSTICE FOR GEORGE FLOYD.”

As the Ontario Council of Agencies Serving Immigrants reminds us in their recent statement:

“Expressions of solidarity are meaningless if we do not confront and work to end the Anti-Black racism that is insidious and pervasive, and deeply rooted in our own communities.”

One first step you can take right now toward racial justice is to make a donation. But there is so much more to do: Learn about anti-Black and colonial violence in Canada. Challenge racism within yourself and the people you know in your family and workplace. Join in collective action. Challenge the organizations you are part of to meaningfully contribute to movements for Black lives — including TTCriders. Our organization, which has one white staff person, is reflecting on our mandate and how our work can better support movements to dismantle white supremacy and systemic racism.

Keep reading to learn more about the connections between anti-Black racism and public transit. We’ve also compiled an incomplete list of Toronto-based Black activists and thinkers who work on public transit issues. If you are not sure where to start with learning and taking collective action, write to us at info@ttcriders.ca, and we can share more links and resources.

Access to public transit has always been a racial justice issue, connected to economic, disability, and gender justice.

New research shows that Torontonians who have been able to give up transit during the COVID-19 pandemic are “wealthier, whiter, more likely to have been born in Canada and less likely to have a disability compared to those who continue to ride.”

The areas of Toronto with the highest rates of COVID-19 cases have a higher population of Black people and are also served by some of thebusiest bus routes. “Black people may end up working front-line jobs where they are less valued and where they don’t have adequate access to personal protective equipment like masks, Dr. Onyenyechukwu Nnorom recently told Global News. These communities also rely on early morning public transit to get to work on time, putting them further at risk.”

This map by Sean Marshall shows how some of the most crowded TTC routes during the pandemic serve areas where racialized and low-income people live and work.

Policing on the TTC

Black Toronto residents are disproportionately targeted by TTC fare inspectors and enforcement officers. The Toronto Star reported last year that the TTC had been effectively carding riders since 2008, collecting 40,000 records on transit riders who were not charged with an offence. The Star’s analysis found that 18.5% of recorded interactions were with Black people — but Black residents make up just 10.7% of Toronto transit users. Reece Maxwell-Crawford, a Black teenager who was tackled and pinned to the ground by TTC fare inspectors in 2018, wrote an open letter and took legal action to address systemic racial profiling on the TTC.

TTC fines are higher than in other Canadian cities; nearly triple the fine amount in Vancouver and Ottawa. Yet some cities in North America, such as Seattle, are lowering fines and moving away from harsh enforcement because it is not effective and Black people and people of colour ​face harsher fare evasion penalties​. You can read a bit more information about fare inspection on the TTC here.

Sandy Hudson of Black Lives Matter – Toronto explains that to effect change that could actually stop police killings of Black and Indigenous people, we must have a conversation about shifting resources away from police budgets. In this recent interview, Desmond Cole argues that police should be defunded and disarmed.

The TTC Board voted to spend $3.2-million to hire 50 more staff in 2020 to reduce fare evasion (although the rollout of these new hires has been delayed due to cost-cutting during COVID-19). Yet the real evaders are the politicians who have underfunded the TTC for decades.

TTCriders is calling on the provincial and federal governments to provide emergency and long-term funding. The TTC faces a $575-million shortfall by Labour Day due to lower ridership during COVID-19.

For information on public transit, see our Free Transit pamphlet.