In and Against the Brazilian State

Following the demise of the communist regimes, and the collaboration of so many social-democratic parties in neoliberal, capitalist globalization, a strong anarchist sensibility emerged, quite understandably, on the radical left, and remained influential for a considerable period of time. From the continent-spanning anti-globalization protests at the turn of the millennium to the rapid spread of Occupy Wall Street from New York to other US and international cities, the predominant mood reflected a widespread suspicion, if not disdain, for any political strategy that involved going into the state.

And then, rather suddenly, there seemed to be a widespread realization that you can protest until hell freezes over, but you won’t change the world that way. That realization came during the very short time bridging the occupations of the squares in Madrid and Athens and the rapid electoral breakthroughs of Syriza and Podemos. It also seeded the Corbyn and Sanders insurgencies inside the dominant center-left parties of the United Kingdom and the United States. 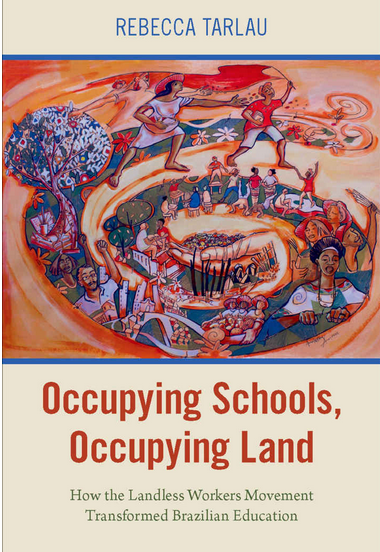 Tarlau is a DSA (Democratic Socialists of America) activist who teaches at Penn State and just happens to be the daughter of long-time CWA (Communications Workers of America) union leader Jimmy Tarlau. She presents the movement’s “long march through the institutions” of Brazil’s educational system in vivid detail, from grade schools to universities, and all the way from Rio Grande do Sul up to Pernambuco in the northeast, drawing even more upon her undergraduate training in anthropology at University of Michigan Ann Arbor than upon her graduate studies in education at UC Berkeley. The result is one of the most profound analyses ever written of what it means to be “in and against the state” as a strategic practice.

Forged in the crucible of struggle against the Brazilian military regime during the 1970s, the cadres of the Landless Workers’ Movement (Movimento dos Trabalhadores Sem Terra – MST) were closely aligned with those of the new Workers’ Party (PT). The PT’s distinctive strategic orientation at the time could be expressed as follows: “We are organizers. That’s what we’re good at. But we need to get into the state. Once we get into the state, we have to continue to be organizers. We have to use state resources to help organize those who remain unorganized.”

It was this orientation that inspired the famous Porto Alegre experiment in participatory budgeting, where a PT mayor had already been elected by the late 1980s. As I can personally attest, when activists attending the World Social Forums at the turn of the millennium heard about the achievements of this experiment, most of them returned from Porto Alegre sounding much like Lincoln Steffens after he went to the USSR in 1919 and came back declaring, “I have seen the future, and it works.”

In fact, the participatory-budget process was full of contradictions and limitations, as was already quite clear to those who had launched the experiment a decade before – not least in the sense that participants at the base never got to decide upon the most important strategic questions with which the local PT government had to deal. Yes, the representatives from the favelas were allowed to choose whether to put resources into building a sewer rather than a road, but they were never involved in addressing the strategic questions of how to deal with the landlords who were reclaiming the land once those roads and sewers were built. By contrast, the MST actively engaged in developing political and strategic capacities in its encampments and settlements (as well at its national cadre school just south of São Paulo). MST activists also devoted themselves, as Rebecca Tarlau shows so well, to fostering such capacities through the public-school system.

When the PT elected its first mayors in the late 1980s, the party discovered that it faced accusations of clientelism if it hired a bus to take demonstrators to Brasília to challenge the way federal state expenditure on services was being off-loaded onto the cities. Since party leaders had committed themselves to doing away with clientelist practices, they didn’t know how to answer that criticism, so they simply stopped doing it. The MST didn’t have to face the same political contradiction. But its own long march through the weak educational structures of clientelist state and municipal governments soon left those governments relying on the MST to help run the schools, even as the MST was able to radicalize many of the teachers who were initially suspicious of it.

What made the MST distinctive in this respect as a social movement was, and remains, its status as an explicit class movement – and, no less explicitly, a socialist movement. Most of the literature on social movements in recent decades took shape in hostility to class analysis, not to mention the “grand narrative” of replacing capitalism with socialism. Tarlau’s achievement is to turn social-movement analysis back toward class analysis. She also foregrounds the type of socialist strategy that involves working “in and against” the institutions of the state so as to transform them – rather than merely protesting outside of them, still less “smashing” them in the old insurrectionary sense.

Yet this remarkably sober book is by no means an exercise in cheerleading. Indeed, Tarlau’s close study of the MST’s involvement in “contentious co-governance” of Brazil’s educational institutions contrasts sharply with most of the existing literature on Brazil’s participatory-budgeting institutions, which so often presented them as “real utopias.” The MST has not transformed the whole of the Brazilian educational system. It has only changed those educational apparatuses in closest proximity to its own spaces of occupation and settlement, and those higher-education institutions directly involved in teacher training for rural areas. As Tarlau shows, the Ministry of Education itself has hardly changed at all.

This raises the further question of what it would mean to go beyond transforming state structures that are primarily involved in social reproduction, by bringing into question those institutions that are centrally involved in capitalist economic reproduction, like central banks and departments of finance or commerce. And insofar as this speaks to the very different experiences of the MST and PT in Brazil, it raises yet another question: Namely, what strategic capacities should a mass political party be trying to develop, if its aim is to occupy the whole terrain of the state in order to transform it? This is the key question facing the socialist left in our time. That Rebecca Tarlau’s important book induces us to ponder it is yet another of its considerable achievements. •