Cabin Fever: Hope on the Edge of Despair at YYZ

New York Times columnist Thomas Friedman infamously defended globalization with the comment, “No, most of our political elite has not realised that the world is flat.” His beloved neoliberal globalization has indeed helped flatten our world as we are all reading this in some form of quarantine.

With lightning speed our lives came to a halt as COVID-19 arrived on planes from one country to another, making airline cabin crew and airport workers the first domestic workers exposed to its horrors. At Toronto’s Pearson Airport (YYZ), we have already lost 13 co-workers, all precarious workers, with hundreds of other confirmed contacts and infections. 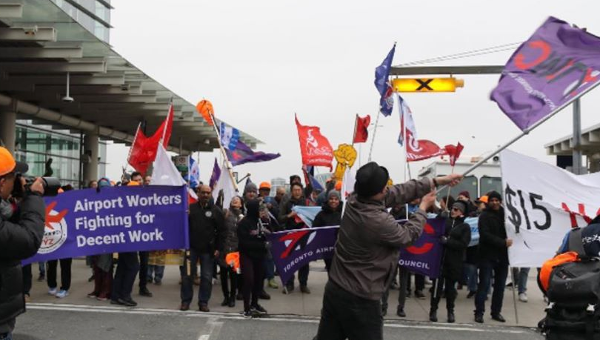 Unbelievably, Canada’s Public Health Agency (PHAC) refuses to even report the total numbers of confirmed cases and deaths to protect the “privacy” of the affected corporations and its employees (no worker in history has ever demanded their co-workers not know about unsafe work). For weeks, bureaucrats calmly assured us that all was under control, denying all work refusals, until posters of fundraising appeals for children of the deceased started silently appearing in our lunchrooms (see poem below).

When directly confronted, PHAC dismissively stated that co-workers’ deaths are a “labour” issue for us to take up with our bosses, as their mandate is for the health of the travelling public only. To paraphrase Marie Antoinette, ‘Let the dead file a grievance’.

At the same time, our airport’s operations have been reduced by around 98%, laying off tens of thousands. All agree YYZ is devastated and will take years to recover. Only our most experienced and essential workers are left behind running Pearson at passenger levels not seen since the 1950s.

Still operating and in the centre of the action is the Toronto Airport Workers Council (TAWC), the collective voice of most of YYZ’s largest Local unions and its 50,000 workers, union and non-union. We call TAWC a community union, as it deals with issues that impact us all that can’t be bargained with just one employer through the traditional business union model.

In 25 years, TAWC has grown to include activists from across YYZ, Canada’s largest workplace, from the most precarious contract workers through to customs officers. Simply put, if you believe in working-class solidarity, you have a place in TAWC.

TAWC’s activists, many of whom are YYZ’s most experienced union representatives, stepped in to fill the role PHAC abandoned, using our solidarity network to alert YYZ of any COVID-related issues such as reporting death notices. In the end, it was TAWC and the media, not PHAC, that advised our community of its 13 deaths and TAWC that leads the fight for airport-wide standards.

This is just one part of TAWC’s COVID Recovery Strategy, drafted by our spokesperson, Steven Tufts, after an emergency meeting with representatives from all of TAWC’s solidarity unions as soon as the crisis hit. This strategy is broken into three phases:

This wasn’t some wish list to be posted and ignored but the practical fixes that were already the subject of discussions with several levels of our Airport Authority, the GTAA, which TAWC has been working with since this nightmare began. Starting with monthly meetings over parking issues in the late 90’s, our years of collaborating have built considerable expertise and lessons learned from previous crises, resulting in more effective community responses over time.

An example was the Ebola outbreak of 2014. Like today, Ebola arrived on planes, and PHAC said our health was a “labour” issue to take up with our bosses. To add insult to injury, they refused to mandate PPE for workers, but would show up in full hazmat suits whenever a suspected case arrived, walking past terrified passenger agents not even allowed to wear gloves.

PHAC refused to meet with our union committees, stating they gave our employers all the information we need to know. In a workplace with over 350 employers, it wasn’t long before the bosses’ minions were spewing everything from “Everything’s ok, get back to work!” to “They’re telling us nothing! We’re doomed!”

Fed up, workers across both Terminals demanded action or they would walk.

When we met with the GTAA we did not demand “what needs to be done” (they are neither our employers nor the state), we asked “what can we do?” In our union worlds this shift would be perceived as collaborative weakness, but it is the foundation of TAWC’s community union model, as it asks what is the most effective thing we can do about the issue. Without a Collective Agreement, we build upon our joint work over time through integrity and trust by proposing practical solutions that benefit the entire community. Due to not having the right to grieve or strike, generating power through this model often requires creative direct actions. Unfortunately, without collective bargaining, this can be frustratingly slow, as we rely on honest persuasion and continual engagement, but our progress has been remarkably steady over the years.

Since PHAC would only meet with the GTAA, they facilitated a meeting with our respective unions’ top Health and Safety Representatives. When our trained reps finally had their questions answered, they were able to make the case for PPE and answer our members’ questions, thus improving community safety and defusing the issue.

This success eventually led to the formation of the Pearson Safety Summit, a quarterly meeting with the GTAA and our unions’ Health and Safety Reps to work on community wide initiatives and ensure open lines of communication – something so simple and sensible in an airport as complex as ours, yet a world first.

Today, this experience is proving invaluable as the Safety Summit is now called the Toronto Pearson Worker Health and Safety Forum (TPWHSF). It meets weekly and is at the forefront of YYZ’s safety response during this COVID pandemic. All agree its work is invaluable, and it was the TPWHSF that drafted our short term strategic goals.

This ongoing collaboration led to a meeting on April 28, 2020, with the GTAA’s new CEO, Deborah Flint. Our COVID-19 Recovery Strategy was the agenda. The meeting was extremely productive, as all items were already well-known, allowing us to discuss solutions within what was possible. A joint statement was, fittingly, issued on International Workers’ Day, 1 May 2020.

Capturing the goodwill of the discussions, Flint declared, “It is vital that employers, workers and their union representatives continue to collaborate on our efforts against this pandemic so that the airport community, notably its workers, can emerge from this crisis stronger and the airport can return to its role as an economic anchor for the region. This includes actions such as an airport-wide COVID incident report and the creation of an online resource centre for airport workers who have been impacted by this crisis.”

In the statement, both parties expressed their determination to co-operate in rebuilding the community by starting with an agreed list of ‘what we can and will do’. Using the community approach when we disagree over an issue, we state our differences and move on to what’s agreed. As a result, progress is being made on several items.

This should not be taken to mean that everything is fixed, and we are singing “Solidarity Forever.” Pearson has a long and militant labour history for good reason, as we have all seen good words disappear when the heat is off. Although the GTAA’s Board is publicly and community appointed with a mandate to operate YYZ in a “safe and secure” manner for the betterment of the Region, they are also a cross section of greater Toronto’s establishment who run it as a corporation. They operate within this duality, so there are no guarantees of our success.

Neoliberals around the world are openly scheming to use the pandemic for “contactless” (workerless) terminals along with other multiple ways to cut costs (us). In the words of Anuja Sonalker, CEO of Steer Tech, “Humans are biohazards, machines are not.” It’s always the working classes who pay for their profit.

We’re all living in the ruins of their hollowed world, which, like PHAC, collapses as soon as tested. With many employers imploding and the state abandoning us, our solidarity as workers and working as a community is our only way forward. As our May Day statement says, “The GTAA and TAWC are committed to co-operating on the industry’s recovery, including at Toronto Pearson, while always keeping the people of Pearson at the centre of their work. The two organizations recognize the airport community’s recovery will take time and feel confident that by working together the industry will recover.”

Time will tell how well our community recovers. Progress continues to be made through our joint Safety Forum, plexi-barriers are going up, the GTAA’s COVID reporting system – a first for a Canadian airport – is online, early work is starting on the virtual Resource Centre and our statement talks about working together on “terminal modifications and new opportunities.”

At the same time, challenges remain: some misogynistic employers are refusing the barriers insisting their predominately female workers be on display (“look professional”) instead of safe. The GTAA is not the state, so their COVID report is voluntary in that employers can opt out, meaning our fight with PHAC continues, new infections continue and not a word of our statement is legally enforceable. There will likely be frustrations and, even if we achieve all our goals, no “victory” can ever be claimed when discussing turning parts of our employee parking lot into a food bank.

That said, the goodwill remains genuine, and our joint work continues to progress in an open and co-operative way unseen before. This crisis has jarred us all at YYZ to the core as this is the only life many of us know. There are no guarantees in our strategy but as we say in TAWC “In solidarity we fly” and, as always, we’ll get through this together.

Asking “what can we do?” doesn’t sound like much, but it’s one of our most practical ways to re-inflate our flattened communities, one question at a time. The type of community unionism being built at YYZ, of multiple employers with multiple unions facing common problems, is one of the ways we need to explore to make another world possible. • 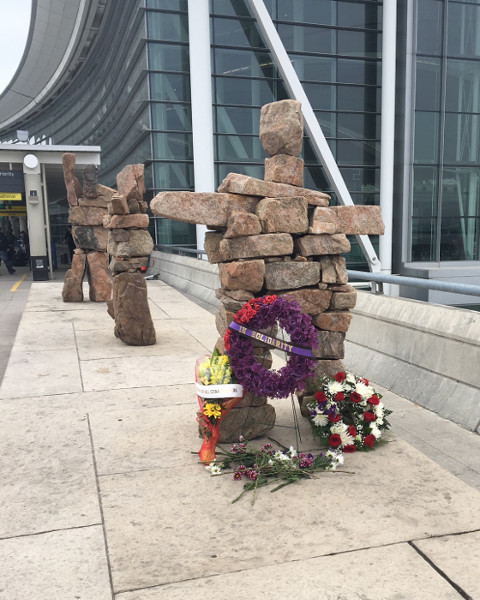 Unbeknownst to us, it was
until did co-workers tell
through posters on the walls

It was very hard to believe;
how, silently, you slipped away,
gone like the leaves in fall

And now we are left
with a lingering pain
and darkness over the light of day;
a muted banshee’s call

Those who may have writ
your names in water should know
that you meant the world to us;
your names, even in water will show
that you were not ink
which can wash away

At Pearson, 50,000 strong,
you will be remembered
for very, very long
We will remember your stories,
your beautiful dreams,
and the memories of us working
together, in teams

For those who suffer because you had to go,
we will immortalize who you were;
for eternity, everyone will know

Your names, your smiles and your love