In recent weeks, more than a dozen countries – including two in Europe – have requested and received Cuban doctors to cope with the Coronavirus pandemic.

John Kirk, a professor at the Latin America program of Dalhousie University in Nova Scotia, is author of Healthcare Without Borders and one of the foremost experts on Cuba’s medical internationalism. Ten years ago, he spent two months embedded with Cuba’s Henry Reeve medical emergency brigade in El Salvador after a hurricane, to observe them. In all he has interviewed 270 Cuban doctors and nurses during the course of his research. John Kirk was interviewed by Cuba Standard.

Cuba Standard (CS): What is the Henry Reeve Brigade?

John Kirk (JK): The Henry Reeve Brigade was formed in 2005. Responding to the massive problems in the wake of Hurricane Katrina, Cuba offered 1,400 medical personnel and 32 tons of medicine to help in New Orleans, which was refused by the George W. Bush administration. Shortly afterwards, there was a major health problem in the Kashmir area of Pakistan after an earthquake. Cuba formed the brigade in response, and named it after an American who fought in the first war of independence, 1868-1878, against Spanish colonialism. 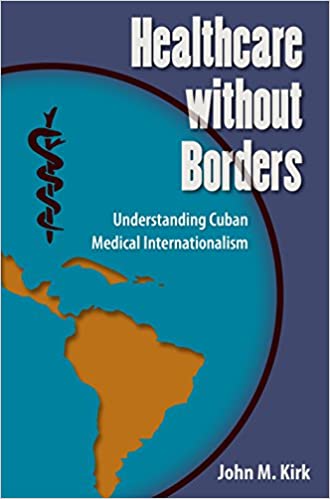 Since 2005, the Henry Reeve Brigade has been involved in all kinds of natural medical emergencies. This is a brigade of several thousand specially-trained doctors, nurses and technicians who go to natural emergencies, whether it be earthquakes, hurricanes or epidemics. They have been involved in emergencies in 16 countries, and counting. As a result of the Coronavirus pandemic they have sent medical brigades to 16 countries. No. 15 was Trinidad and Tobago; the British Virgin Islands were the latest.

CS: What is the brigade doing right now?

JK: At present, about 900 Cubans who are part of the Henry Reeve Brigade have gone to a variety of countries in the last three weeks, first of all to Italy and also to Andorra. This is the first time the Brigade has been deployed in Europe. There are also negotiations as to where they go from here.

A group of First Nations in Manitoba, Canada, have requested their support. There are rumors about brigades being sent to Argentina, about Germany, about Spain, about France. It’s unclear what that means at the moment, but the Coronavirus pandemic has caused many, many people to wake up to the severity of this problem, and the Cubans have got a surplus of medical personnel that are very, very well-trained in difficult circumstances so they can easily adapt.

CS: Many Cubans are skeptical about sending doctors abroad at a time of emergency at home…

CS: Is there anything comparable?

JK: Médecins Sans Frontières are probably the closest. But they go for shorter periods, and they are paid.

CS: So what is the motivation behind this?

JK: Cuban doctors interviewed on Cuban media have said that they are there for humanitarian reasons. Most media in North America find it difficult to understand the intangible: It is in the Cuban DNA to provide assistance. From the daycare experience right up to university, Cubans are socialized to believe that you support the collective.

CS: Will Cuba get paid for the Coronavirus assistance?

JK: Cuba’s (longer-term) medical services are being remunerated on a sliding scale, depending on each country’s ability to pay. You’ve got well-trained medical personnel, as well as the track record of missions in all kinds of natural emergencies. But it is unclear at the moment whether the Cubans will get paid or not in this case. I presume they will be, although I have no idea how that will pan out.

CS: Why would Cuban medics take such risks for little pay?

JK: I interviewed 270 Cuban medical personnel for my book, and the prime reason when asking why people had gone was because they would make a lot more money working abroad. The second reason was because everybody else was doing it; at that time a quarter of Cuba’s doctors were working abroad, and that was the main source of hard currency for the Cuban government.

The third reason was – a bit like some North Americans’ backpacking in the 1960s – a sense of adventure, combined with the fact that the Cubans wanted to see medical conditions in the developing world of the Global South, which they had only seen in medical textbooks. So for all these reasons, they volunteered.

The people I interviewed were not dragooned into going; I suspect that most of them were speaking the truth. I think this was a meaningful opportunity for them to make money, to develop their medical education, and to do what everybody else was doing. Beyond that, it’s in the preamble of the Cuban constitution to share what they have, as opposed to giving leftovers; so many Cuban doctors have done it, and it is part of the DNA.

CS: Beyond the stated motivation of solidarity, why is the Cuban government doing this?

JK: I think both political and financial motives are significant.

If you look at the Lineamientos of reform introduced by the Cuban government under Raúl Castro, you will see that there is a deliberate reining-in of the international medical program, because of his natural pragmatism. Fidel Castro had been far more ideological. If you compare the size of medical missions that went under Raúl, you see that they were significantly smaller.

Under Miguel Díaz-Canel, we now have the opportunity for a new president to put his imprimatur, his seal, on what Cuba wants to do in this regard. Cuba has a surplus of doctors, particularly after the conclusion of agreements with Brazil, Ecuador and Bolivia for political reasons. You’ve got a lot of doctors and nurses, you’ve got a massive wealth of experience, you have a new international context where for the first time a European country has requested Cuban medical support – the symbolism of that is important – and clearly this is Cuba’s opportunity to show its potential.

The United Nations’ World Health Organization has talked at times about having an emergency medical force ready to go and resolve serious health problems around the globe. If any country can do that, it’s Cuba. Should the WHO want to invest in this program – which would make enormous sense for international health purposes as we see with this pandemic – it raises the opportunity for Cuba to provide healthcare at a fraction of what European- and North American-trained medical support would cost. This is a good opportunity for Cuba to demonstrate economically viable ways to deal with international health problems.

CS: The US Department of State says this is all about money, suggests Cuban doctors are slaves, and urges third countries to reject Cuban aid…

This is done by Washington purely for political reasons in exactly the same way that they are talking about bringing back the ‘medical parole’ program that was introduced by George W. Bush and ended by Barack Obama. The only people that were affected by defecting Cuban doctors were those in the Global South who had access to healthcare for the first time in their lives, which was then pulled away from them as a result of the medical parole program.

I think the current administration’s pushing of this idea of encouraging other countries to reject Cuba is totally immoral.

CS: There is a difference between short-term emergency aid and longer-term programs Cuba offers. Can you explain the financial aspects of each?

JK: Sure. For the emergency medical support, Cuba charges nothing. It depends on whether host governments want to compensate the Cubans, but there is no price tag, as I understand it. Likewise, for healthcare for what’s called the Programa Integral de Salud in poorer countries – sub-Sahara Africa is a good example – Cuba charges nothing.

However, for countries such as Qatar, where Cuba has got a hospital of 400 Cuban medical personnel, Cuba charges a lot of money. It charges less than what the European and North American-trained doctors and nurses would charge, but it does receive money from that. Estimates vary, but I would calculate about $6-billion goes into Cuban coffers as a result of Cuban medical services abroad.

This money goes to maintain the Cuban medical system. So it is a form of subsidizing the Cuban healthcare system, which I think makes eminent sense. For the number of countries that pay for medical services, there is a sliding scale. Some countries can afford to pay. Arab countries have a lot of petro-dollars that they use. Angola, South Africa are fairly wealthy, they can pay. But if you go to countries such as Gambia or Niger, you will see that – if they do pay – they will pay significantly less.

CS: Before the recent political changes in Latin America, healthcare was Cuba’s number one export. Do you have any comment about the future economic potential of healthcare exports for Cuba?

JK: I think this remains an area of tremendous potential for Cuba, as is biotechnology. The political winds have changed, bringing about an end to the pink tide and beginning a blue wave of very conservative governments in Latin America. This had a tremendously negative impact on Cuba’s potential for exporting medical services. A lot depends on the governments that are in power in Latin America, and how much they value the health of their populations.

I would argue that the country that needs the greatest amount of Cuban medical care is the United States. I’m not holding my breath that President Trump will invite in the Henry Reeve Brigade. But clearly, underserved populations in the United States, people who cannot afford private healthcare and who are not part of the population that can receive state-assisted medical care – they deserve medical care, and the Henry Reeve Brigade could provide that. This is obviously not going to happen. In synthesis, it depends on the political winds that are blowing at any particular time and the magnitude of threat to the public health in individual countries.

The World Health Organization needs to be bolstered. I think that this pandemic might be a wake-up call to the international community that we need to have medical personnel on standby. Ebola affected West Africa more than anybody else, it didn’t affect Europe and North America the way it affected West Africa.

Now that the coronavirus is affecting the Global North, this could be a very useful wake-up call. Under these circumstances, nobody offers the potential for having on standby a medical army as does Cuba. So the potential for Cuba in the future, if the international community has the will, can be quite great.

CS: How about longer-term programs – do you think wealthy countries such as Canada, Italy, Spain, France, Germany could become ‘customers’ of Cuba?

JK: It’s very difficult to ascertain the degree to which countries in the Global North are ready to accept the idea of a small country – 11.2 million people where the average salary for a doctor is $60 a month – being able to help. I think there’s a superiority complex in many countries of the Global North, and that will make it very difficult for those countries to accept that Cuba can support them. Portugal has started to experiment with Cuban doctors, and the results seem to be positive. Several Arab countries are using their services, and that is going very well.

The potential is there. It’s a question of whether countries in the Global North can recognize the potential of the Cuban model. The jury is out on that, but I think the experiment in Italy and Andorra, and maybe other European countries coming on board, will assist them. •

This interview was first published on the Cuba Standard website April 1st, 2020.

The Canadian Network on Cuba has launched an aid campaign. For more information to help support these efforts see: Cuba’s Contribution to World Fight Against COVID-19.

John Kirk is professor at the Latin America program of Dalhousie University in Nova Scotia.