On December 16, 2019, a few dozen members of Canada’s business, academic and government elite met in Toronto at the invitation of the Royal Bank of Canada (RBC). They were there to officially launch the Energy Future Forum (EFF), “a new pan-Canadian initiative to develop policy answers that reduce greenhouse gas emissions and strengthen the economy.” Co-founded by three of Canada’s largest corporations – RBC, Suncor Energy and Hydro-Québec – alongside the charitable Ivey Foundation and the think-tank Public Policy Forum, the EFF’s leaders struck an optimistic tone, even as the climate picture has grown increasingly bleak. As RBC CEO David McKay explained, while climate change was “one of the most pressing issues of our age,” he was certain that he and all his bank’s “stakeholders” could “embrace the challenge and show Canadians that innovation can achieve measurable progress on climate change and help create a clean, prosperous economy.” 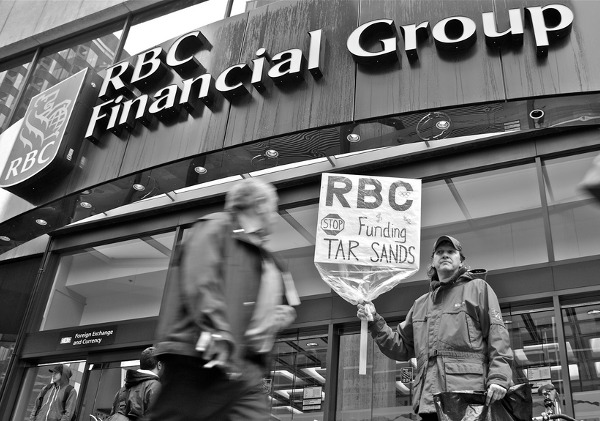 The EFF is strategizing for the long-term, aiming to “map out an ambitious set of policy solutions that are environmentally sound, economically beneficial and publicly acceptable.” The December meeting was but the first of many. The Forum plans to meet three times a year over the next three years to discuss policy choices and “develop ideas and approaches that can make a difference and gain broad support.”

What do one of Canada’s biggest banks and its corporate allies hope to achieve through the EFF? Although details remain sparse, early indications are not very encouraging. The EFF’s big ideas appear to be to keep the bitumen pumping of the Tar Sands and hope and pray that with public subsidies, producers can find a way to cut emissions.

As of yet, the EFF has been quiet on the specifics of its policy proposals, but its editorials give a flavour of what it has in mind. The EFF’s “Grand Bargain on Climate and Energy” aims to put Canada on a course to net-zero emissions by “promoting innovation in production” and “creating bulletproof accountability.”

What does this mean in practice? Luckily for the Forum, some of Canada’s biggest oil and gas players have already committed – voluntarily, no less – to the first plank of the Bargain, pledging to reach net-zero carbon emissions some time within the next few decades. Precisely how they aim to get there remains largely unknown, however. On top of this, the Forum is calling for significant increases in electrification in the oil patch, and for “interim milestones,” like the government of Alberta’s 2016 100-million megatonne carbon emissions ceiling set by NDP Premier Rachel Notley (well above existing levels to allow for further mass development projects like the proposed, but recently shelved, Teck Resources Frontier Project) for the Tar Sands. These ceilings need to be progressively reduced to zero, though the Forum says nothing of the time-frame for doing this.

But perhaps the most notable plank of the EFF’s strategy is its implicit call for giant subsidies to oil and gas companies so that they can develop carbon capture and storage technologies, a totally unproven – and for many, outlandish – method of lowering emissions (that is also favoured by Scott Moe’s government in Saskatchewan). For Public Policy Forum President Ed Greenspon, the federal government’s 1996 extension of capital cost allowances and the government of Alberta’s simultaneous royalty deferral plan – both huge corporate tax cuts for oil and gas companies – provide a good model of how the Canadian state can foster sustained Tar Sands growth all while keeping up the fight against climate change. In its early days, the EFF is already influencing public discourse. In a recent editorial advocating for Ottawa’s approval of the Teck Frontier Project (before the company subsequently withdrew its proposal) in exchange for Alberta’s imposing an emissions cap, the Globe and Mail pointed favourably to the Forum’s “new fiscal incentives to aid emissions innovation.”

In other forums, the RBC’s McKay has echoed similar talking points about the need to treat the fossil-fuel sector responsibly. In his recent reflections on the 2020 World Economic Forum, McKay made the case for moving carefully towards a “greener economy.” If we wish to avoid “massive economic disruption” on our path to getting there, McKay suggests, we must “avoid large-scale dispersion of capital away from some of our best innovators – the oil and gas companies that are using artificial intelligence, drone surveillance and advanced chemistry to reduce emissions.” In other words, if the government wants to tackle climate change, it has to make sure capital keeps flowing into the fossil-fuel sector!

RBC: The Royal Bank of Carbon

Precisely why RBC is banking so heavily on “cleaner oil and gas” is clear when one looks at the bank’s business profile. Since the 2015 signing of the Paris Climate Accord, RBC has funneled over $100-billion in financial support to the fossil-fuel industry, good for fifth place among the world’s banks. According to figures reported by the financial industry watchdog Bank Track​, RBC has issued loans for the Line 3 Pipeline Replacement Project (L3RP), the Mountain Valley Pipeline and the Trans Mountain Pipeline Expansion project. What’s more, RBC underwrote the Saudi Arabian national oil giant Aramco’s late-2019 initial public offering, and in December 2019 co-financed a $3-billion credit facility to the beleaguered Brazilian conglomerate, Vale SA, a company that operates a battery of coal mines.

But RBC’s involvement in fossil fuels goes much deeper than loans and credit facilities. The bank also has huge equity stakes in some of the biggest players in the Alberta Tar Sands. As the Corporate Mapping Project has shown, RBC is the second largest equity owner in Canada’s fossil-fuel sector, behind only Exxon Mobil Corporation. The Corporate Mapping Project’s data date from 2010-2015, but online business databases show that the bank remains heavily invested in the Tar Sands. According to Yahoo! Finance, RBC holds stakes valued at $5-billion in Enbridge​, $3-billion in Suncor​, $2-billion in Canadian Natural Resources​, and $350-million in Teck Resources.

On top of this, the bank has shared several “interlocking directorships” with North America’s fossil fuel giants. One current RBC board member – ​Thierry Vandal – provides a good illustration of the bank’s tight connections with the fossil-fuel sector and Canada’s corporate world. From 2005 to 2015, Vandal was CEO of Hydro-Québec, another Energy Future Forum founder, and today, Vandal sits on the board of TC Energy Corporation (in which RBC holds a $4.3-billion stake), the company behind the deeply-contested Keystone XL and Coastal GasLink pipelines. 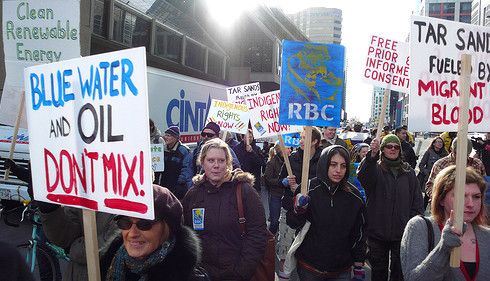 In building support for continued Tar Sands extraction, RBC is doing exactly what we should expect of it: namely, advancing the financial interests of its shareholders. Government action to curtail growth in Canada’s oil sands would mean a big hit for RBC and its shareholders. So-called “stranded assets” – oil and other fossil fuels left in the ground – represent a monumental threat to the industry’s profits and valuations. The bank and its allies aren’t about to let that happen without a fight.

The EFF’s discourse has another effect. In drawing attention to buzz-words like “clean technology” and “innovation,” the EFF aims to overcome the growing opposition to fossil-fuel expansion projects, so graphically illustrated in the recent nation-wide protests against the TMX pipeline and the Coastal GasLink pipeline projects.

We can’t let the banks and oil companies get away with this. Meaningful action on climate change isn’t just about improving our carbon emissions intensity – it’s about transforming our politics, our economies and our societies.

Socialists and environmentalists need to keep doing the important work of organizing and building popular platforms for government action that addresses the climate emergency, tackles economic and social inequality, and supports solidaristic economies and socially-responsible production. We can’t count on the banks to do that for us. Indeed, reversing climate change and restructuring energy production, especially in Canada, cannot avoid the socialization of the banks. •