Holding Pens for the Homeless

Homelessness is spinning out of control in many places, not least right here in Toronto. However, in California, the situation is now generating an acute political crisis. So great is the problem of mass destitution in that state that whole urban areas are facing a threat to public health and a level of social dislocation that undermines public order and the basic level of social stability needed for capitalism to conduct business. Trump’s Department of Housing and Urban Development (HUD) is reporting an increase in the homeless population of California of 16.4% over the course of the last year and alarm bells are ringing the corridors of power. The human misery of destitution has now reached such levels that the cash registers are being affected. 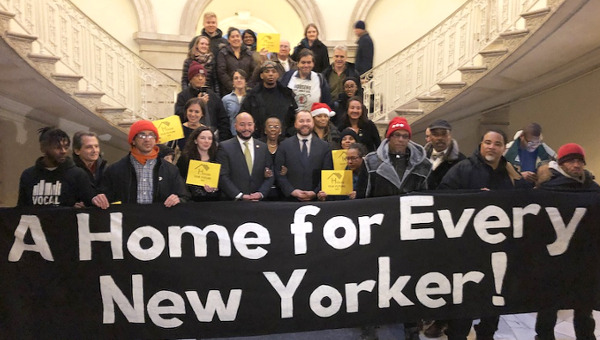 When a hard right champion of the austerity agenda like HUD Secretary Ben Carson says that he wants to ensure homeless people “go to the places that are designed to help them get out of that situation,” it is very necessary to anticipate what he might have in mind. The Trump Administration is “considering moving homeless people in California off the streets and into unused federal buildings.” This could be interpreted in several ways but the political character of those involved leads to a very strong suspicion that what is being contemplated is not a supply of social housing but, rather, a round up of those who have been thrown on the streets, so as to place them against their will in holding pens for homeless people.

The above mentioned Mr. Carson is not known for the depth of his social analysis. To him, broken and sinful misfits are getting in the way of profitable business dealings and need to be taken somewhere where no one will see them. His moral assumptions are quite impervious to any consideration of the actual factors driving this homeless crisis. If he were presented with an explanation of “the rising cost of housing, coupled with wage stagnation at the lower end of the income spectrum that has led to a housing affordability crisis across Southern California” the HUD Secretary’s eyes would simply glaze over.

The same factors, that have put 36,300 people onto the streets of Los Angeles, are playing out across North America and on the other side of the Atlantic. The British Medical Journal is clear that, “Austerity policies lie at heart of soaring homelessness and related health harms.” The US Coalition for the Homeless informs us that “an estimated one third of homeless families in New York City are working but unable to afford market-rate rents” and that the number of shelter residents who are employed has shot up. The role of “soaring housing prices” in putting people onto the streets of Vancouver is abundantly clear. Escalating homelessness is, in fact, an inevitable effect of the convergence of the agenda of austerity, coupled with the extreme commodification of housing in what has come to be known as the “neoliberal city.”

Margaret Thatcher’s infamous suggestion that there’s no such thing as society was the product of some highly selective reasoning on her part. She certainly was not signalling an intention to disband the police forces or military. Nor did she intend to fling open the doors of the prisons. What she actually meant was that the state’s secondary role in the area of social provision needed to be drastically reduced in line with the needs of the neoliberal agenda. The state has always ensured public order by way of some mix of meeting peoples’ needs and applying physical coercion. If the social infrastructure is to be weakened, the readiness and ability to resort to the billy club must be increased. The neoliberal decades have seen hugely increased rates of incarceration (most strikingly in the US) and the favouring of police budgets over social spending.

This increased use of the repressive power of the state has certainly been brought to bear on the homeless populations that the agenda of neoliberal austerity has produced. As destitution has assumed ever more serious proportions, governing authorities devoted to the neoliberal reordering of urban space, have predictably favoured the authoritarian option when it comes to trying to contain the problem. So, with Toronto’s homeless shelters bursting at the seams, and people forced to try and survive outside, City Hall has put a premium on raiding and dispersing homeless encampments. When a right wing Tory government in Ontario introduced the Safe Streets Act in the 1990s, it was rightly regarded as a draconian attack on people forced to ask for spare change on the street. No one would have imagined, however, that this legislation would survive fifteen years of Liberal rule and be used far more extensively today than its original sponsors ever anticipated. Meanwhile, in British Columbia, the Mayor of Nanaimo publicly ruminates on the forced institutionalization of homeless people.

So it is that, in California, where the intensity of the homeless crisis runs ahead of the grim situation in other parts of North America, the neoliberal agenda’s ‘collateral damage’ creates a defining moment. It appears that the Trump Administration favours the razing of the extensive network of homeless camps and the placing of those driven from them in “temporary government facilities.” Some local politicians, however, are alarmed at the prospect of such rampant authoritarianism and favour a significant concession that would ensure a significant part of the homeless population are housed. The dilemma really comes down to the limitations of how far austerity and social abandonment can be taken within the framework of a liberal democracy.

The capitalist state has come a full circle from the days when the Elizabethan authorities, deciding they must stave off unrest and social dislocation, came up with the first model of social provision in 1601, in the form of a Poor Law. On the streets of California’s cities, the same stark choice is now placed before modern day state officialdom. The homeless population there is vast and, with the global economy moving towards a slump, the even greater numbers of people precariously poised on the edge of destitution are at risk of losing their housing. Unless a significant concession is made that partly reverses the austerity agenda, the choice will be between tolerating destitution on a scale that threatens the social order or a sweep of the streets that takes on the features of selective martial law.

The authoritarian option can only be seen as a very real threat. In Hungary, the hard right regime of Viktor Orban has passed legislation making it illegal for people to be homeless. Trump’s political instincts are striking similar to the ‘illiberal’ Orban and, no doubt, there would be a base of support for a crackdown on California’s homeless. Once removed from the streets and out of sight, those swept up would find that their ‘temporary’ holding facilities became horribly permanent and a strict prohibition of camping outside, coupled with a complete lack of housing options, would turn these facilities into de facto prisons. It would be a return to the labour camp approach that was adopted by governments during the Great Depression and that was challenged by the unemployed movements of that period, including with the great On to Ottawa Trek of 1935.

As the economy sinks into global slump, and the already dreadful homeless crisis intensifies dramatically, it is very likely that the ‘solutions’ coming from the Trumps and Orbans will become the ‘policy options’ of the neoliberal centre. It will be more important than ever to bring the fight against homelessness into a broader struggle against austerity. We must stop the attempt to drive out homeless people and demand, instead, the social housing, living income and decent wages that can tackle the homeless crisis. Instead of a society that sweeps people from the streets when they have nowhere to go, we need one that considers housing a human right and that acts accordingly. •