Cuba: Something That Must Be Defended

For starters, I must say that the present juncture hasn’t been particularly harsh for me. It must have been luck, but the right bus has always turned up to get me out of a jam. I’ve managed to travel with some leg room even. That doesn’t mean I don’t understand and relate to the difficult situation people are in all over the country. 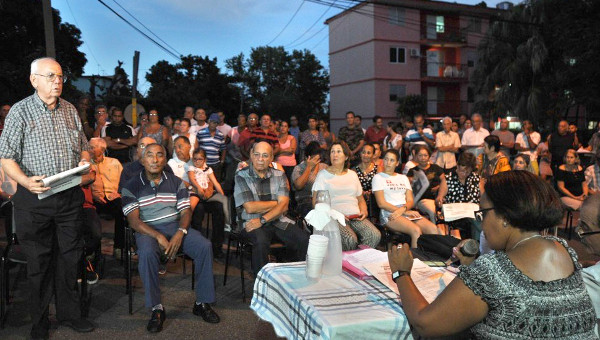 In these last few days I’ve had some time to reflect. Among the things which have drawn my attention is the solidarity of drivers who stop to give people a ride. I’m not only referring to those who stop when the authorities make them, but to those who do it of their own free will. Several officials have given me a ride, and there I am, in the back seat, feeling slightly guilty for writing articles against the bureaucracy.

On Tuesday, September 24, Donald Trump gave his speech at the United Nations General Assembly. He said, among other wacky things, that Socialism and Communism are not about helping the poor, but about one thing only: “power for the ruling class.” Karl Marx, wherever he is, must be completely dumbstruck. Hearing that coming from the buffoon who now sits in the imperial throne is truly infuriating.

One who is usually disappointed with the sluggishness and bureaucracy infesting the Cuban government must inevitably ask: why does Donald Trump want to destroy it? If this government is so unrevolutionary, why blockading it so vehemently, to the point of criminalizing the ships that bring oil to the island?

In my analysis I have reached the conclusion that there are two significant social contradictions in Cuba. The first one is the old struggle between socialist revolutionary power and the most reactionary forces of global capitalism, mainly based in Miami and Washington. The other one is the contradiction between the common people and the bureaucratized leadership, which has emerged as a result of the political structure created to secure that revolutionary power.

One contradiction exists within the other. That’s why the Cuban problem is so difficult to solve.

That’s the result of my analysis. However, I also understand that not everyone can see that clearly. For many people, the second contradiction, between people and bureaucracy, is the only one that matters, and thus they go all out in attacking the government. There’s an objective reason for that: in the day-to-day lives of Cubans, imperialism is a faceless ghost, something they always talk about but you never see, while the government official who comfortably drives or flies everywhere has a face and a name. Human beings tend to focus their anger on what is closest; on what affects them directly.

You need to see Trump ranting about Communism on one hand and a colonel giving people a ride on the other to realize that there’s something there that must be defended. There’s something at the heart of our Cuban reality which annoys Trump and the sycophants of the new right. That’s the question we must ask ourselves: what does Donald Trump want to destroy?

What they want to destroy is the cultural legacy of Cuban socialism. In spite of how deteriorated the revolutionary capacity of our government is, and after all the beatings life has given us, this remains a country which has experienced one of the boldest anti-capitalist revolutions. We have decades of amassed experience in everything that’s possible when a society renounces capitalist egoism. It’s been years of political independence and sovereign pride, well beyond the place we would be assigned in the map of capitalist geopolitics.

That’s what they’re aiming at; not just at the government. Their goal is to get to us, the citizens, and to present themselves as our saviors, so we give up and surrender to the way of life normalized by global capitalism. They call us sheep because what they really want is to herd us back into their pen.

Therefore, that undeviating imperialist strategy meant to steal our brains and our hearts complicates everything we can do in Cuba as activists against bureaucratism. We must keep a certain protective zeal. It’s not about defending the bureaucracy, those who precisely hide behind the blockade to keep doing things wrong. It’s about preserving that space of political sovereignty, something unthinkable in today’s world, which has been given us by the Revolution and Socialism. That’s our most precious inheritance.

We cannot strike the Cuban government as if it were an immense bronze bell. In reality, it’s a bell made of glass, and if we break it, we might just be left unprotected forever. With this I want to respectfully criticize many who also write – like myself – for alternative media, and who I believe are just dying to go around striking bells.

When you look at them closely, you can see that the two contradictions are actually two versions of the same one. That’s because bureaucratism is nothing else than the continuity of domination in socialism. It’s like a piece of capitalism that lives on with us, and that is born of our inner demons, of the egoism we have been unable to overpower as human beings. And the imperialism knows that, and encourages it. It’s in their math. Yes, when the US blockades a country, they are counting on the economic crisis bringing out the worst of human beings, even of those who have so far been revolutionaries.

“Bureaucratism is … like a piece of capitalism that lives on with us, and that is born of our inner demons, of the egoism we have been unable to overpower as human beings.”

Bureaucrats play along with imperialism, though they may not always be aware of that. Imperialists know it, and they approve of the debasement of revolutionaries. That, among other reasons, is why they haven’t decided to invade Venezuela and Cuba in full strength. It is more affordable to squeeze them economically, and to let bureaucratism and its outrages destroy the socialist cultural legacy.

That’s why I won’t accept either the discrediting of those of us who take it on ourselves to criticize what’s done wrong. Nor will I accept the appeals to an abstract unity. Because right now, fighting against bureaucratism and against the debasement which surfaces in us as human beings subjected to extreme situations is true anti-imperialist work. The cultural legacy of Cuban socialism deserves to be defended. •

Translated from the original.

Yassel A. Padrón Kunakbaeva is a Marxist philosopher, revolutionary activist. He writes for La Joven Cuba.