“At the moment we’re looking at a people lacking the control that allows them to function as a society – water, the freedom to travel, the basic right to safety,” said Martin Sundram, delegate for the Artists’ Union of England (AUE) at the annual congress of the British trade union movement. 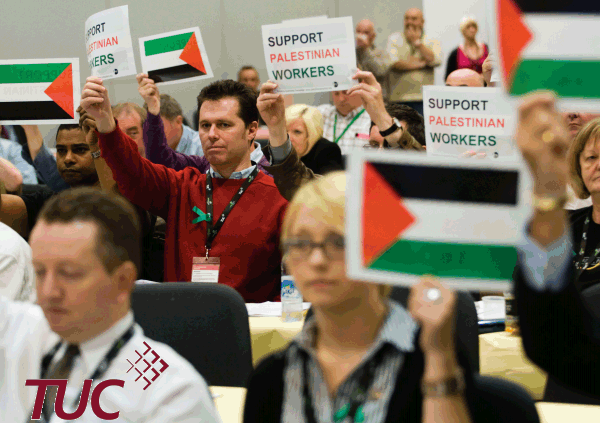 The AUE tabled Motion 75, titled “Palestine: supporting rights to self-determination,” to the conference, stating unequivocally that “Trump’s ‘deal of the century’ is an attempt to destroy core Palestinian rights.” The AUE’s Palestine motion was passed unanimously on September 11, according to the TUC’s report.

The motion affirmed the collective rights of the Palestinian people to self-determination and to return to their homes, called for a stop to the British arms trade with Israel, and reaffirmed the union movement’s call to boycott companies complicit with the Israeli settlement industry.

Philippa Marsden, executive council member of Unite, Britain’s second-largest union, said: “Increasing numbers of annexations and the building of illegal settlements has built a string of mini-Gazas across the country. All of us here must redouble our efforts to build solidarity with the Palestinian people.”

Palestine has long been on the campaign platform of many trade unions around the world. However, it was the shocking mass destruction of the Gaza Strip in the 2008-09 Operation Cast Lead Israeli military offensive that galvanised many in the union movement.

The TUC’s 2009 Congress did not mince words in condemning Israel’s attacks on Gaza, even going so far as to call out Israeli union federation, the Histadrut: “Congress condemns the Histadrut statement of 13 January 2009 in which it backed the attacks on Gaza and calls on the General Council to carry out a review of the TUC’s relationship with Histadrut.”

The TUC also called for an end to the British arms trade with Israel, the suspension of the European Union-Israel Association Agreement and, for the first time, a boycott of Israeli settlement products and divestment from companies association with the Israeli occupation.

The following year, after the international outcry over Israel’s naval attack on the Gaza Freedom Flotilla, in which 10 Turkish activists were killed, the TUC condemned Israel’s “deadly assault on activists on the Mavi Marmara” and its ongoing blockade of Gaza.

The TUC again excoriated the Israeli Histadrut federation for its May 2010 statement “which sought to justify the Israeli action” and encouraged its member unions, employers and pension funds to boycott and divest from companies involved in the Israeli settlement industry and occupation.

Over the following decade, the British union movement built its Palestine solidarity campaign around calls to end Britain’s arms trade with Israel and support for the non-violent Palestinian civil society call for boycott, divestment and sanctions (BDS).

Support for the Boycott Call Grows

The grossly disproportionate Israeli attacks on Gaza in 2009 and on the Freedom Flotilla in 2010, the ongoing Israeli blockade of Gaza, the ever-expanding Israeli settlement drive and a moribund peace process, were among many factors that spurred international trade unions into action on Palestine.

In 2009, dockworkers from the Maritime Union Western Australia branch and the South African Transport and Allied Workers Union called for a boycott on the servicing of Israeli-registered ships at their ports.

Following the 2010 Mavi Marmara incident and the 2014 Operation Protective Edge Israeli military offensive against Gaza, many unions and communities established picket lines at ports around the world to protest the docking of Israeli ships.

A broad coalition of Palestinian unions issued a statement in 2011 calling on unions around the world to support the call for BDS against Israel until it complies with international law.

An innovative initiative of establishing “apartheid-free zones” was mounted in Spain. A network of 34 European unions pledged to “take effective action … for holding our governments and the EU as a representative body accountable.”

The Response in Australia

In Australia, the ACTU issued condemnations of Israeli attacks, as did dozens of individual Australian unions. The outrage was enough to see about 27 Australian unions join the Palestinian BDS call, endorsing boycotts of the Israeli settlement industry, arms embargoes or super fund divestment.

These included the peak national bodies of the Australian Education Union (AEU), the Australian Manufacturing Workers Union (AMWU), the Construction Forestry Mining Energy Union (CFMEU), and the Electrical Trades Union (ETU), as well as state-based Trades and Labour Councils. Like much of the British union movement, solidarity with the oppressed people of Palestine features in many Australian union campaigns.

At its 2018 triennial congress, the ACTU called for Palestinian self-determination within a two-state solution. However, the “two-state solution” mantra has virtually disappeared as Israel lurches further to becoming “a right-wing society that has no problem with apartheid.”

The Australian union movement is yet to find its legs on serious, coordinated mobilisations around active solidarity with their Palestinian union colleagues.

Early admirable actions by the WA dockworkers have not been carried through to other sectors. The ACTU is yet to come out as strongly as its British, NZ and other international counterparts on actions to hold Israel accountable for its violations of international law and human rights abuses against the Palestinian people.

“The message from every major union was clear.

“We understand the seriousness of the assault on the collective rights of the Palestinian people being mounted by Israel with the support of Trump and far-right allies.

“We will ramp up our collective response and reaffirm our support for a policy of boycott and divestment.”

This article first published on the Green Left website.