Public Banks and a Just and Green Transition 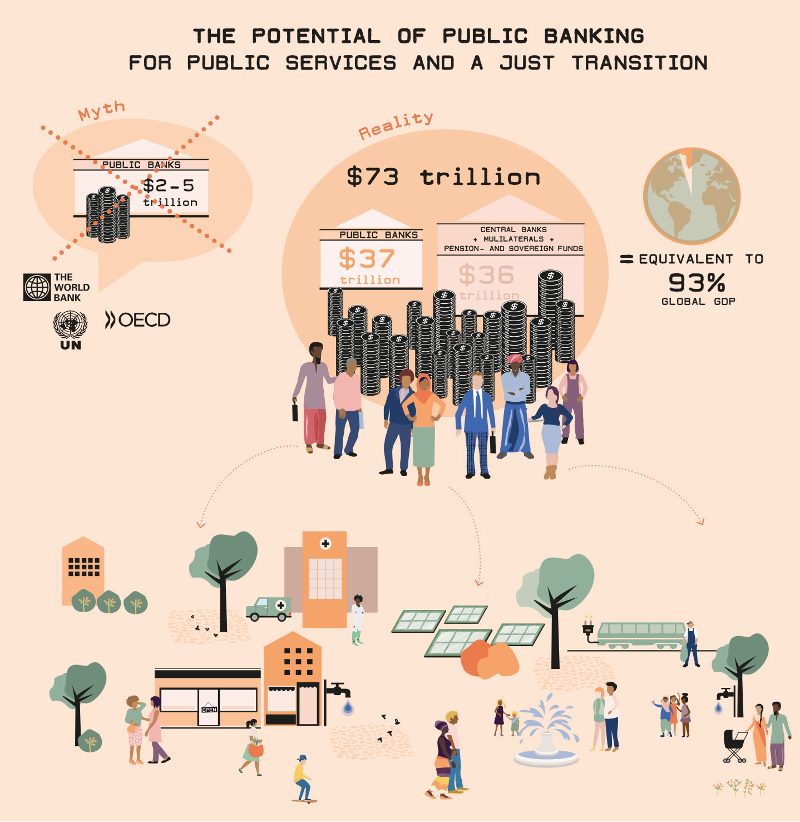 The turning point for public banks was really the UN’s 2015 Addis Ababa Action Agenda on how to finance the 2030 Sustainable Development Goals (SDGs). The international community finally acknowledged what most already knew: private finance had no appetite for saving the planet without first feeding insatiable shareholders. Ergo, high-risk, low-return green investments weren’t on the menu.

The solution? For the UN, the World Bank, and the OECD it is to subordinate public finance to private interests. Public development banks should take the lead in absorbing private investors’ risks to guarantee their projected returns. There is no other way of cajoling otherwise reticent financiers to fund the global transition to a low-carbon, climate resilient future. Besides, public banks have limited financial capacity. The green transition needs the seemingly unlimited pools of global financial capital. This is the core message of the UN’s Inter-Agency Task Force Financing for Sustainable Development Report 2019, with an important sub-text being public financial incapacity. Reinforcing existing neoliberal tropes, there is no alternative but to mobilize private finance for climate finance. The nuanced message being we now need public finance to underwrite it.

But what if this wasn’t true, or at least not in the way pitched by neoliberal ideologues and unhindered growth advocates? A new edited book by the Transnational Institute (Amsterdam), Public Finance for the Future We Want, paints a different picture. The contributors evidence the many ways that the future of finance can and should be public, backed by real-world examples of alternatives spanning the globe. However, the structural power of global predatory finance must be curbed in order to build the basis for a democratically-organized and life-sustaining future. Public finance must enable the public, not private, interest.

Public banks, in particular, are shown to have much greater financial capacity than commonly believed. Whereas the IATF 2019 Report claims there is only $5-trillion in combined public bank assets (so, hardly sufficient to tackle the $4 to $6-trillion in additional annual climate mitigation investments by 2030), the TNI contribution demonstrates that there are nearly 700 public banks around the world that have combined assets nearing $38-trillion (that’s about 48 per cent of global GDP). Put otherwise, 20 per cent of all bank assets are still publicly owned and controlled.

This accounts for just the national and sub-national banks. Examples span the globe from the well-known French La Caisse des Dépôts and the China Development Bank to the lesser-known Vietnam Bank for Social Policies and the Turkish Ilbank (Provinces bank). If you add in the state-owned multilateral development banks (like the World Bank) plus public pension and sovereign wealth funds plus central banks, then total combined public financial assets jump to just under $74-trillion. Given political will and popular support – something of the kind envisioned in the Green New Deal – public financial capacity can be rapidly scaled-up and mobilized.

If we go blindly down the current UN-authenticated climate finance path, existing public banking capacity is at serious risk of being captured by private financial interests. Should this occur, private investors’ profit- and growth-driven imperatives will undermine any hope of a just and green transformation in the public interest. Moreover, public finance will only feed the very same private financiers that contributed to the climate finance crisis in the first place! Only in a neoliberal world does this make for coherent policy-making.

One alternative solution is to democratize public banks, thus enabling the mobilization of public bank resources for a just and green transformation in the public interest.

There are already-existing models of democratization. At a minimum, most public banks’ Boards of Directors will include some combination of government ministers and appointed representatives from the community. For example, the modest North American Development Bank (NADB) has a 10-member Board made up mostly of government representatives while the massive German development bank, the KfW, has a much more inclusive 37-member Board with wide ranging societal representation.

The most inspiring model is the Costa Rican ‘Banco Popular’ (Banco Popular y de Desarrollo Comunal). Its model of democratization can enrich debate on financial alternatives for a green and just transformation. Founded by the government in 1969, the Banco Popular operates under public law as a ‘worker-owned’ bank geared toward serving the ‘collective welfare’ of society. By law, Costa Rican workers must deposit 1.5 per cent of their wages into the Banco Popular. After a year, 1.25 per cent of their contribution is transferred to the worker’s pension fund. The remaining 0.25 per cent is held in the bank as a form of permanent capitalization to support mandated lending programmes.

The workers’ contributions come with meaningful representation. In 1986 the Banco Popular firmly institutionalized democratization procedures by creating the ‘Assembly of Working Men and Women’ and making it the bank’s highest decision-making forum. Representatives from across ten social and economic sectors constitute the 290-member Workers’ Assembly. According Carlos Cortés, Costa Rican writer and reporter, the Workers’ Assembly is the corner stone of the bank’s contribution to the democratization of Costa Rica’s economy, development, and financial system.

Within the Assembly, the Permanent Commission for Women holds the Assembly accountable for gender equity. Across the bank as a whole, the Banco Popular is required to have 50 per cent representation of women present in all decision-making bodies. The Women’s Commission holds the bank accountable to this, while building gender equity capacity and awareness. Gender equity requirements extend to local representative councils linked to the bank’s nationwide branch network.

These achievements are not taken for granted. In 2002, Costa Ricans passed a legal reform, the ‘Democratization’ Law (No. 8322 Ley de Democratización de las Instancias del Decisión del Banco Popular y de Desarrollo Comunal). The Law, probably unique in the world of finance, re-affirmed and further specified the social purpose, democratic ethos, and gender equity dynamics of the Workers’ Assembly and the Banco Popular as an institution.

Finance for the People

The take-away lessons? Contrary to the prevailing climate finance narrative, we have (and can build) massive public bank financial capacity globally. Moreover, we have the potential to meaningfully democratize public banks via a ‘People’s Assembly’, ‘Women’s Commissions’ (among others), local ‘Councils’, and representative ‘Boards’. We have here a solid starting point for debate on how to finance a just and green transition in ways that are not, first and foremost, bent to the needs of global finance, capital accumulation, and growth imperatives.

In a financialized world dominated by a powerful, unaccountable, and self-interested financial class, there will be no just or green transformation without first reclaiming financial capacity in the public, not private, interest. But it would be a grave mistake to assume that resurgent public banks, by virtue of being publicly-owned, will necessarily function in the public interest. Public banks can and do go wrong. For public banks to work in the public interest, they must be made to do so. This demands meaningful democratization. This is the action now needed. •

Thomas Marois is a Senior Lecturer in the Department of Development Studies, SOAS, University of London. He is co-editor (with Lucia Pradella) of Polarizing Development: Alternatives to Neoliberalism and the Crisis (Pluto, 2014), and author of States, Banks and Crisis: Emerging Finance Capitalism in Mexico and Turkey (2012).