We, the undersigned, are calling on the Canadian Labour Congress (CLC), in the most urgent terms possible, to express public opposition to the Government of Canada’s arms deal with Saudi Arabia. 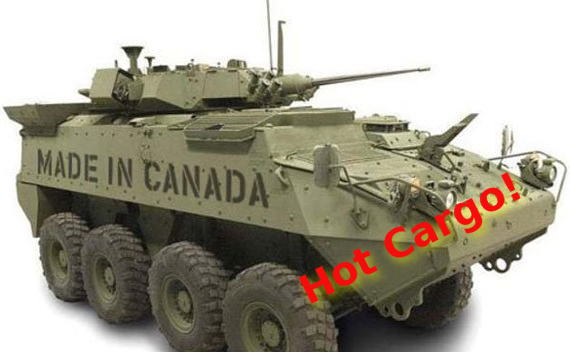 Saudi Arabia and its coalition partners are waging war in Yemen. The war has plunged the country into what the United Nations (UN) calls “the world’s worst humanitarian crisis.” According to a recent UN report, approximately 70,000 Yemenis have died since the beginning of 2016. At the moment, three civilians are killed every day in Yemen. Hospitals, schools, markets, and mosques are common targets for Saudi coalition airstrikes. Two thirds of the Yemeni population require humanitarian support or protection, 17 million are food insecure, three million have fled their homes, and 14.5 million require access to safe drinking water – and as UN Women has found, women and girls bear the brunt of this devastating situation. A 2018 report of the UN High Commissioner for Human Rights concluded that violations and crimes under international law have occurred and continue to be perpetrated in Yemen. A report by Amnesty International documented that parties to the conflict are obstructing the delivery of essential goods and humanitarian aid, in contravention of international law. While Yemen’s workers are trapped between hunger and war, Yemeni trade unions have called for peace.

Canada is complicit in the war in Yemen. The export of Canadian-made light armoured vehicles (LAVs) to Saudi Arabia, an approximately $15-billion contract originally signed by the Conservative government of Stephen Harper, is now proceeding under export permits approved by the Liberal government of Justin Trudeau. Although new export permits for arms shipments to Saudi Arabia have reportedly been suspended pending an indefinite review by the Trudeau government following the murder of Saudi journalist Jamal Khashoggi, according to recent data from Statistics Canada over half a billion dollars worth of armoured fighting vehicles have been exported through the Port of Saint John to Saudi Arabia in 2019 alone. There is credible evidence that Canadian weapons sold to Saudi Arabia are being used in the devastating war in Yemen. And while the Saudi-led coalition continues to commit serious violations of international humanitarian and human rights law in Yemen, Saudi Arabia also has a persistent record of serious violations of the human rights of its citizens.

In April 2016, the Canadian Labour Congress – through its membership in the Canadian Council for International Co-operation (CCIC) and as part of coalition of human-rights, development and arms-control groups – endorsed an open letter to Prime Minister Justin Trudeau, which expressed profound concerns about the issuance of export permits for Canada’s arms deal with Saudi Arabia, “despite flagrant incompatibilities of this contract with the human rights safeguards of our export controls.” The letter urged Prime Minister Trudeau to rescind this “immoral and unethical” decision.

Since then, the silence of the CLC has been deafening.

On this issue, Canada’s labour movement is uniquely situated to bring pressure to bear on the Liberal government. While Amnesty International, Oxfam Canada, and other civil society organizations have called for the cancellation of the arms deal, it is unionized Canadian workers – in manufacturing plants, on railways, and in ports – who have the power to stop the production and shipment of weapons of war to the Saudi regime.

In the face of the global climate crisis, migration crisis, and a political crisis in which right-wing politicians demonize migrants and refugees while pushing an agenda of austerity, environmental destruction, and war that drives displacement and migration, the CLC must stand for a green, peaceful socially just economy where good jobs do not depend on developing, building, and shipping weapons of war.

Labour can and must be a voice for peace. Working with peace activists and human rights organizations, unions in Denmark, Finland, Germany, and Norway have successfully pressured their respective governments to suspend Saudi arms transfers. Here in Canada, in December 2018 members of the International Longshoremen’s Association Local 273 courageously refused to cross a picket line at the Port of Saint John, where peace activists had assembled to protest the arrival of the Bahri Yanbu, a Saudi cargo ship scheduled to transport Canadian-made LAVs to their destination in Saudi Arabia. And in the past few weeks, union dockworkers in the Italian Port of Genoa and the French Port of Marseilles Fos made international headlines when they refused to move, load, or help ship military cargo destined for Saudi Arabia.

Brother Yussuff, we call on the CLC to demand Prime Minister Trudeau immediately cancel the Government of Canada’s arms deal with Saudi Arabia, and further, we call on the CLC to declare military goods destined for Saudi Arabia as “hot cargo” and use its considerable resources to coordinate labour movement opposition to this arms deal. Yemen can’t wait.

Simon Black is an Assistant Professor of Labour Studies at Brock University. Follow his tweets at @_SimonBlack.