On June 25, Canada’s Minister of Canadian Heritage and Multiculturalism announced that the Trudeau government’s new anti-racism strategy would include the adoption of the International Holocaust Remembrance Alliance’s (IHRA) definition of antisemitism. The Co-Chair of the Centre for Israel and Jewish Affairs (CIJA) proudly noted that:

“the IHRA definition also explicitly recognizes that anti-Zionism – that is the delegitimization and demonization of the Jewish state – is a clear and unequivocal expression of antisemitism.” 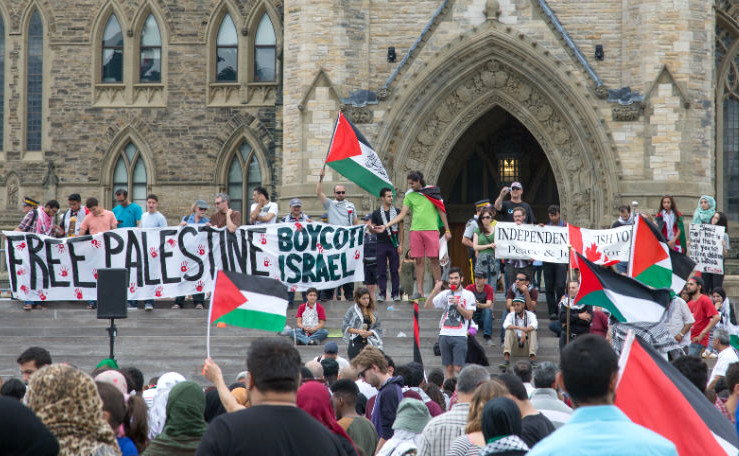 While the adoption of this definition is as yet only “symbolic and declaratory,” it can form the basis for attacks on Palestinian solidarity at various levels. The funding of NGOs that are critical of Israel may be threatened. Public institutions will be pressured to deny meeting facilities for events that take the Palestinian side. It is also quite possible that this initiative could be taken further and the expression of anti-Zionist views actually be treated as a form of hate crime.

This latest move is part of the Canadian component of a concerted international drive to weaponize the false allegation of antisemitism in the service of Israel. In 2009, the Canadian Parliamentary Coalition to Combat Antisemitism (CPCCA) was formed, comprised of former and sitting MPs from each party. It issued its report in 2011 and the focus was on combating the so called ‘new antisemitism’ of those who challenge Israel. Independent Jewish Voices (Canada) described the whole initiative as an “attempt to attack free speech and silence criticism of the Israeli government’s oppressive and illegal policies” and “to label criticism of Israel and its behaviour, as well as organized efforts to change them, as anti-Semitic and to criminalize both.”

The BDS Movement has also been attacked by governments in Canada, with resolutions condemning the boycott effort coming from both the federal parliament and the provincial legislature in Ontario. The Al Quds Day Rally in Toronto has faced concerted efforts to undermine it, with the Premier of Ontario, Doug Ford, asserting last year that “Our government will take action to ensure that events like Al Quds Day… are no longer part of the landscape in Ontario.”

Toronto’s Mayor, John Tory, took a similar position and Liberal MP, Michael Levitt, Chair of the Canada-Israel Parliamentary Group, urged the City and Province “to hold the organizers accountable for this hateful event.”

Independent Jewish Voices (Canada) has produced an excellent report that shows how the IHRA definition is being used to further the attack on Palestinian solidarity, insufficient attention is paid to very real forms of antisemitic hate crime. The Israeli government and its supporters are aggressively using this document as a key tool in their efforts to “suppress – and even criminalize – criticism of Israel and support for Palestinian rights.”

If the effort to intimidate and suppress support for the Palestinians, especially when it is expressed as clear and forthright anti-Zionism, is being challenged with such escalating ferocity, this largely reflects a certain note of desperation on the part of Israel’s apologists. The BDS Movement has made gains and the general mood has shifted against the Zionist state. At the same time, Israel’s political leadership is racing to the right with the support of the Trump Administration and dispensing with polite fictions about a peace process, as they move to brutally complete the colonial project. The pretence of a liberal democracy seeking a just resolution is no longer viable. The accusation of antisemitism against international supporters of a free Palestine is really all that’s left in the toolbox. So, while fascists in Eastern Europe pose a real threat to Jewish communities and US nazis march through the streets chanting, “Jews will not replace us,” fire is focused on the left and life long anti-racists, like Jeremy Corbyn, are labelled as hatemongers. Moreover, the goal of the attack is no longer merely character assassination. The IHRA definition is being put forward as one that should inform the work of police and prosecutors. They prepare the ground to arrest those they can’t intimidate into silence.

The Labour Party’s acceptance last year of the IHRA definition, with all of the examples included, was desperately unfortunate. As an effort by some on the left to appease the right and achieve peace, it was a predictable failure and only emboldened the attackers to go further with their cynical misuse of antisemitism. However, it also had the most serious implications for international Palestinian solidarity. Precisely because the prestige of the Corbyn leadership is so considerable and it is looked to with such hope in many other countries, the retreat had a damaging effect. We can expect the Liberal Party of Canada, fully complicit in the oppression of the Palestinians, to readily accept the IHRA definition but, for Labour to do this, even as the document is being used to attack solidarity movements in country after country, was massively unhelpful.

For obvious historical reasons, the position that a left led party in Britain takes on an anti-colonial struggle is a decisive question. Leftists in the country from which the Balfour Declaration was issued have a particular responsibility to the Palestinians.

Though he was not the first Zionist politician to make this gesture, Israel’s Ambassador to the UN, Danny Danon, stood before the Security Council in April of this year and waved a bible in his hand as he declared that “this is our deed to our land.” That anyone can suggest that an ancient religious text should be used to decide affairs of state and international relations in the 21st Century is quite astounding yet no Western leader would even consider questioning these theatrics. If, however, Danon’s bible promised, not a part of the Middle East, but a portion of Western Europe, the Zionist claim to self-determination would have gone nowhere. When Zionism emerged in the 19th century, as an adjunct of European colonialism, no one spoke in code. Everyone understood that the plan was for a settler colony that would serve as a garrison of Western interests. It would be, as Theodor Herzl put it, “a sector of the wall of Europe against Asia, we shall serve as the outpost of civilization against barbarism.”

Herzl’s wall is standing today. It was erected by ethnically cleansing the bulk of the Palestinian population, creating vast numbers of refugees and establishing an Apartheid regime for those who could not be removed. Last month, Netanyahu ventured the opinion that, “If Israel wasn’t here, the Middle East would collapse.” By that, of course, he means that the US led domination of the entire region would be called into question and he is far from wrong.

The nature and role of the State of Israel is such that we can’t be content to be critical of its excesses and worst aspects. The seventh of the “contemporary examples of antisemitism” listed in the IHRA definition speaks of “Denying the Jewish people their right to self-determination, e.g., by claiming that the existence of a State of Israel is a racist endeavor.” The dispossession of the Palestinians can’t possibly be considered the exercise of a right to self-determination and Israel, a colonial settler state, is a fundamentally racist endeavour. Zionism is not a religion or an ethnicity but a political ideology and its propositions are questioned or rejected by many Jews, while they are supported by leaders of Western powers who are, for the most part, not Jewish.

As Israel seeks to crush Palestinian resistance, complete the colonial project and become an impregnable fortress of Western interests in the Middle East, a frank and clear anti-Zionism is at a premium. When Palestinians join the Great March of Return to the Gaza fence, it is not enough to accuse the IDF of using excessive force. We must declare that the Palestinians do, indeed, have a right of return and to live in a free, democratic and secular Palestine. If they can show such courage and pay such a price, surely we can face down and refute the lies and slanders and show our solidarity and support for the Palestinians is non negotiable. •