What Ever Happened to the Energy Transition?

Anyone trying to understand what’s happening with the world’s energy systems right now can be forgiven if they are confused. On one hand, most people know about the climate emergency, and the need to move away from fossil fuels. On the other hand, we frequently see headlines about “record setting” levels of wind or solar power, how “coal is dead,” booming sales of electric vehicles, or how renewable energy is now cheaper than fossil fuels. Many stories in the second category suggest that the transition to a low-carbon economy is “inevitable,” or even “well underway.”

Sorting through all of this can be very daunting, especially for people who are not energy experts, but who are concerned about the climate crisis. For South Africans, understanding these issues is especially important given the country’s heavy reliance on coal, the serious problems facing the Electricity Supply Commission (Eskom), and the announced plans for its “unbundling” in order (among other things) to accelerate the shift to renewable energy sources. As my colleague Sean Sweeney has argued elsewhere, talk of “unbundling” Eskom is code for privatization: it is a well-established part of the privatization playbook of the World Bank and the International Monetary Fund (IMF).

So what’s really going on? It is true that energy systems around the world are undergoing profound changes. Different countries are facing different challenges, and are tackling those challenges in different ways. But since the climate crisis requires global as well as local action, it is worth looking at the trends in order to understand the lessons.

Despite “record setting” growth in renewables, the overall growth in demand for energy is larger still. In March 2019, the International Energy Agency (IEA) reported that global energy demand grew by 2.3% in 2018 – the sharpest rise, and nearly twice the average rate, this decade. The surge was attributed to strong overall economic growth, as well as to record temperatures in many parts of the world, which raise demand for heating and cooling. 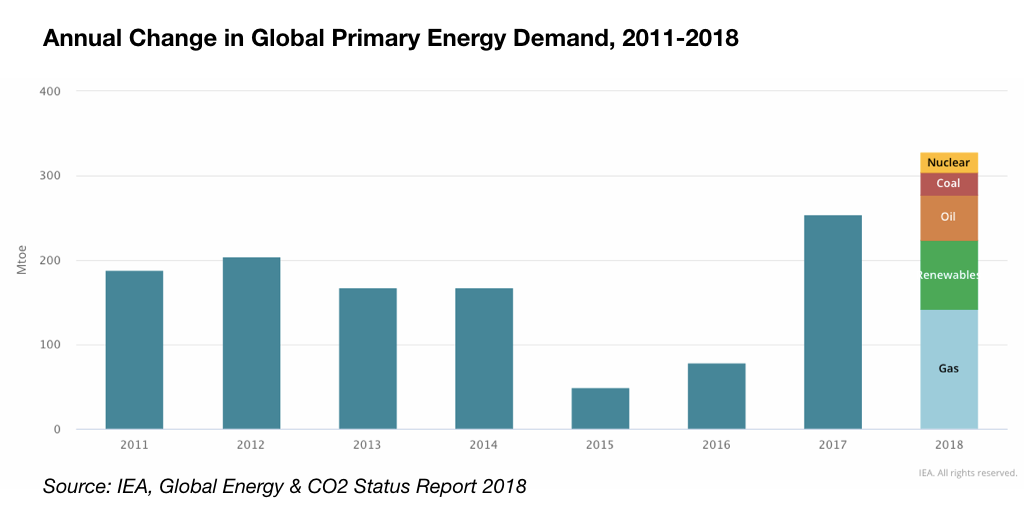 While demand for all forms of energy is growing, what is happening with the power sector (electricity) is especially important. Moving away from fossil fuels will involve widespread electrification, dramatically increasing the need to generate electricity. Global demand for electricity grew even faster in 2018 than demand for energy overall, at 4%. And 42% of energy-related emissions last year came from the power sector.

Despite the closure of many coal plants around the world, coal remains the dominant fuel for generating electricity globally. On current trends, coal consumption is projected to remain at roughly current levels for many years. Although coal consumption declined for a few years, it actually rose in 2017, and again last year.

Coal consumption is growing dramatically in several large countries, mainly in Southeast Asia. China recently announced plans for at least 300 new coal-fired power plants – most of them outside China. Coal demand for power rose 2.6% last year, and CO2 emissions rose 2.5%, with coal accounting for 80% of the increase.

Where coal generation capacity has been replaced in the energy mix, it has mostly been replaced by natural gas rather than renewables. This is especially true for the world’s two largest emitters, the US and China. 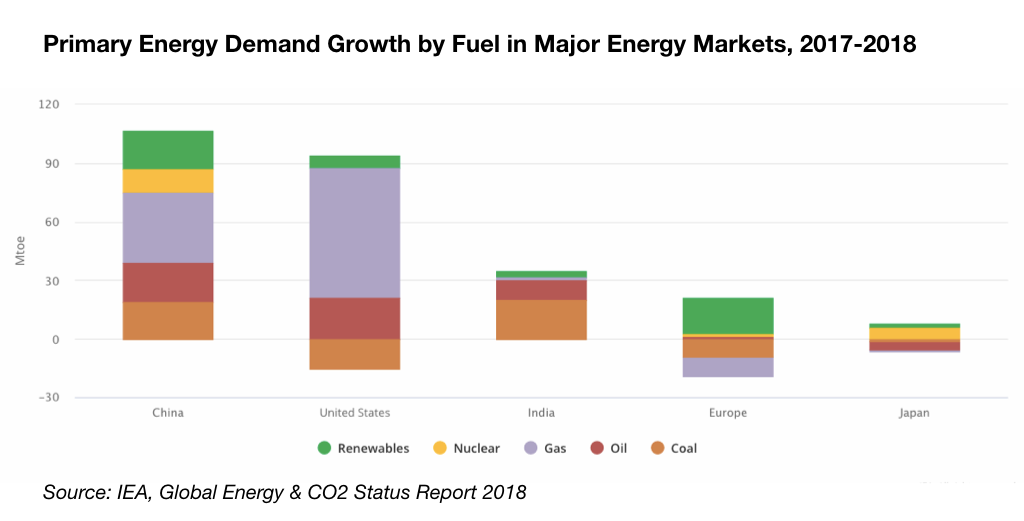 From the perspective of climate change, this is bad news. Natural gas has been promoted as a “bridge fuel” between coal and renewables, because burning methane produces less CO2 than burning coal. But methane itself is a much more powerful greenhouse gas than CO2 on shorter time scales – roughly 86 times more powerful on a 20-year time scale – and we are learning that methane leakage from fracking and other operations is significantly higher than previously recognized. It even exceeds any gains associated with burning gas rather than coal.

So what we are seeing is not a “transition to renewables,” but rather a reconfiguration of the world’s energy systems. Meanwhile, overall use of energy continues to grow, and no major fuel source is going away any time soon. In other words, not only are we not yet digging our way out of the hole, but we haven’t even stopped digging the hole deeper yet.

Time to Stop Digging and Inspect the Shovel?

How did we get here? In order to understand why the situation is so alarming, we need to look more closely at the policies that were supposed to drive the transition to a sustainable new “green” economy.

In March 2019, the IEA reported that the deployment of new renewable generation capacity “stalled” in 2018. 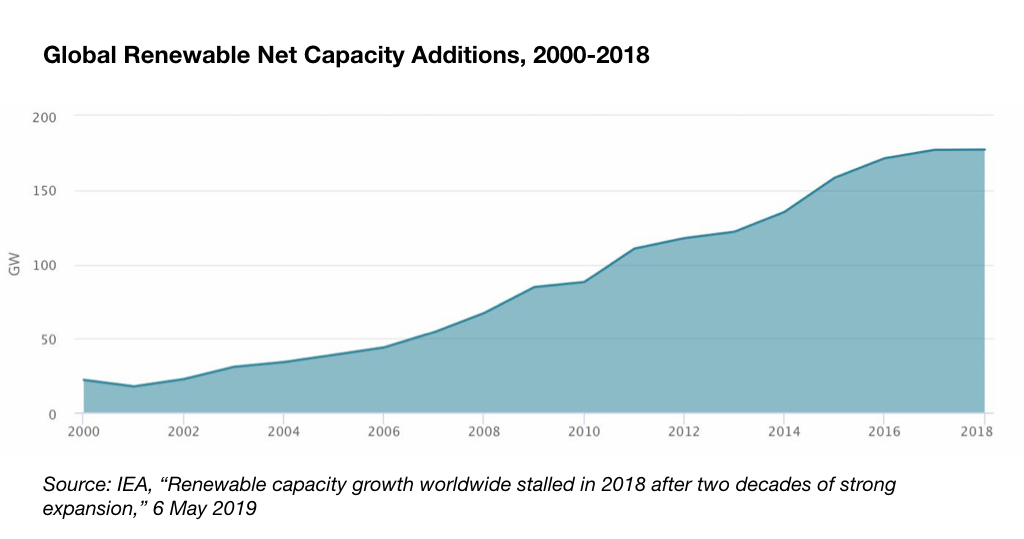 Why has this happened? As Bloomberg New Energy Finance reported in early 2019, investment in new clean energy capacity fell 8% in 2018 from 2017 levels – from $362-billion to $332-billion. This is very striking, given that we hear so frequently about “record low” prices for renewable generation, which we are told makes renewables more attractive than fossil fuels.

The problem is that the way these “falling prices” are typically reported ignores a crucial distinction: the distinction between the falling construction costs of the infrastructure, and the falling auction prices for the projects that are contracted.

It is true that the construction costs associated with building new renewable projects are falling; this is due to economies of scale, technological improvements, etc. But the competitive pressures of auction-based procurement are driving down the final auction prices even faster. This means profit margins are shrinking, and investors are turning elsewhere.

Crucially, this decline in investment has taken place at a time of very low interest rates. This is especially important because the cost of capital – the interest on money borrowed to build the projects – is by far the largest cost factor for renewable generation, accounting for three quarters or more of total project costs for wind and solar projects. So any rise in interest rates would act as a significant further brake on investment levels.

China to the Rescue?

We often hear that China has taken a different path, and indeed recent data from Bloomberg would seem to show that clean / renewable energy investment in China is continuing to grow (despite the fact that China is also building large numbers of coal plants): 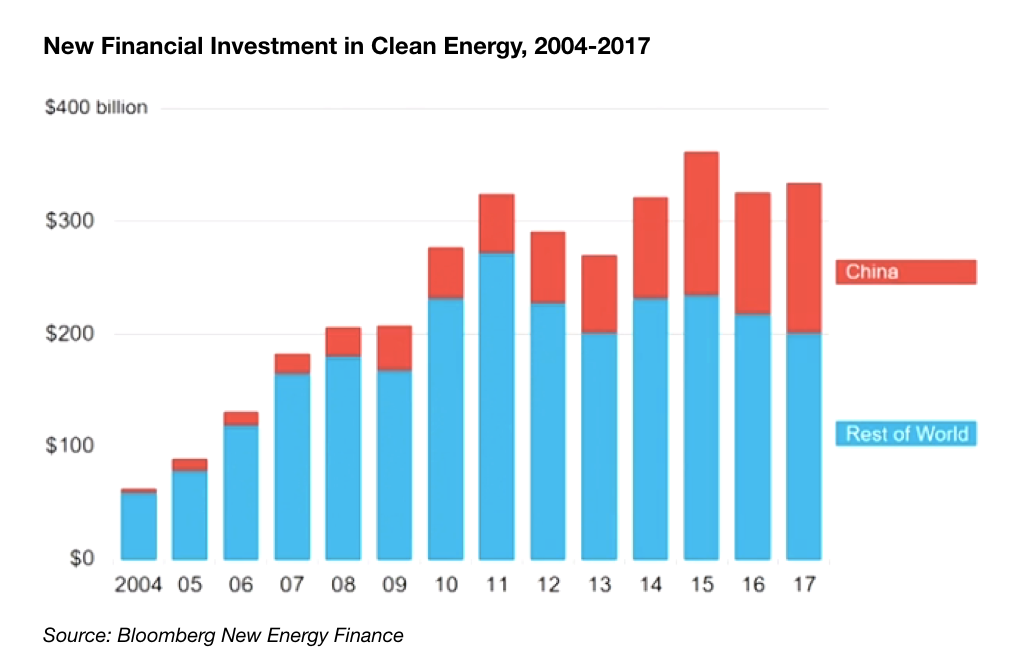 Unfortunately, this apparent difference seems to be largely a matter of timing. In order to understand it, we need to back up a bit.

The initial boom in solar and wind capacity in Europe and elsewhere – the boom that has now stalled there – was largely due to generous, “come one, come all” subsidy schemes. These typically took the form of “feed-in tariffs,” where anyone who could afford to provide generation capacity could sign up and enjoy the guaranteed revenues. This generated a burst of deployment – so much in fact that it became impossible to accommodate all of the new capacity into existing grids.

It also led to exploding subsidy bills for governments. These costs were often passed on to users in the form of higher electricity bills, which led to skepticism about renewable energy and political pressure on government officials. This is why many governments shifted to “competitive bidding” systems, which allowed them to contain both capacity additions and costs – but also led to shrinking profit margins and the loss of investor interest.

That same pattern now seems to be emerging in China. On June 1, 2018, in an effort to contain ballooning subsidy bills and growing overcapacity, the country’s National Development and Reform Commission announced that, effective immediately, approvals for new projects had been “halted until further notice,” and tariffs for existing contracts would be lowered by 6.7 to 9 per cent (depending on the region). The announcement caused serious drops in share price values for Chinese solar companies, and industry observers slashed capacity growth forecasts for the year by as much as one-third.

The implications of these trends are profound. In order to have any chance of a just transition, we first need to ensure that there is a transition. The current, market-based approach to the energy transition has failed, and we cannot afford to wait any longer.

Unions and climate activists need to organize and mobilize for public and social ownership of energy, with real democratic accountability. Only such an approach can ensure a rapid but orderly transition to renewable energy – one that takes considerations of profit out of the equation, and puts workers and communities at the centre. •

This article was commissioned by Amandla! Magazine, based in Cape Town, South Africa, and appears in the magazine’s Issue 64 (June 2019).