An Open Letter to Extinction Rebellion

This letter was collaboratively written with dozens of aligned groups. As the weeks of action called by Extinction Rebellion were coming to an end, our groups came together to reflect on the narrative, strategies, tactics and demands of a reinvigorated climate movement in the UK. In this letter we articulate a foundational set of principles and demands that are rooted in justice and which we feel are crucial for the whole movement to consider as we continue constructing a response to the ‘climate emergency’.

The emergence of a mass movement like Extinction Rebellion (XR) is an encouraging sign that we have reached a moment of opportunity in which there is both a collective consciousness of the immense danger ahead of us and a collective will to fight it. A critical mass agrees with the open letter launching XR when it states “If we continue on our current path, the future for our species is bleak.” 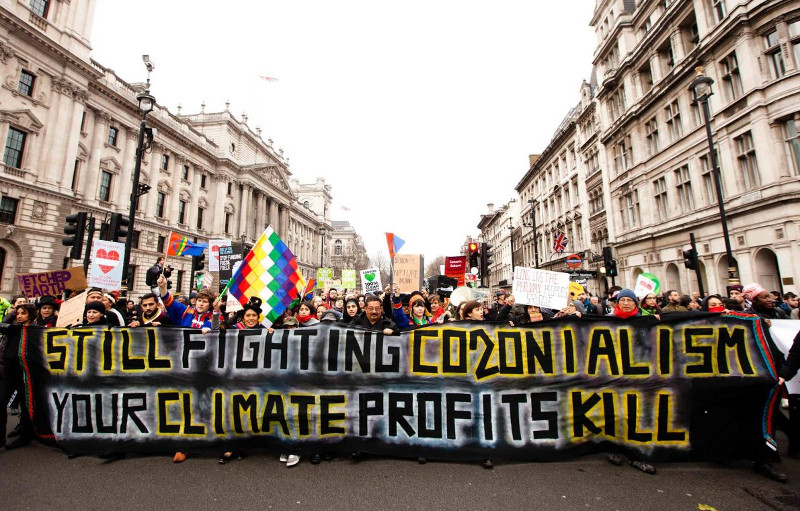 At the same time, in order to construct a different future, or even to imagine it, we have to understand what this “path” is, and how we arrived at the world as we know it now. “The Truth” of the ecological crisis is that we did not get here by a sequence of small missteps, but were thrust here by powerful forces that drove the distribution of resources of the entire planet and the structure of our societies. The economic structures that dominate us were brought about by colonial projects whose sole purpose is the pursuit of domination and profit. For centuries, racism, sexism and classism have been necessary for this system to be upheld, and have shaped the conditions we find ourselves in.

Another truth is that for many, the bleakness is not something of “the future.” For those of us who are indigenous, working class, black, brown, queer, trans or disabled, the experience of structural violence became part of our birthright. Greta Thunberg calls world leaders to act by reminding them that “Our house is on fire.” For many of us, the house has been on fire for a long time: whenever the tide of ecological violence rises, our communities, especially in the Global South are always first hit. We are the first to face poor air quality, hunger, public health crises, drought, floods and displacement.

XR says that “The science is clear: It is understood we are facing an unprecedented global emergency. We are in a life or death situation of our own making. We must act now.” You may not realize that when you focus on the science you often look past the fire and us – you look past our histories of struggle, dignity, victory and resilience. And you look past the vast intergenerational knowledge of unity with nature that our peoples have. Indigenous communities remind us that we are not separate from nature, and that protecting the environment is also protecting ourselves. In order to survive, communities in the Global South continue to lead the visioning and building of new worlds free of the violence of capitalism. We must both centre those experiences and recognise those knowledges here.

Our communities have been on fire for a long time and these flames are fanned by our exclusion and silencing. Without incorporating our experiences, any response to this disaster will fail to change the complex ways in which social, economic and political systems shape our lives – offering some an easy pass in life and making others pay the cost. In order to envision a future in which we will all be liberated from the root causes of the climate crisis – capitalism, extractivism, racism, sexism, classism, ableism and other systems of oppression – the climate movement must reflect the complex realities of everyone’s lives in their narrative.

And this complexity needs to be reflected in the strategies too. Many of us live with the risk of arrest and criminalization. We have to carefully weigh the costs that can be inflicted on us and our communities by a state that is driven to target those who are racialized ahead of those who are white. The strategy of XR, with the primary tactic of being arrested, is a valid one – but it needs to be underlined by an ongoing analysis of privilege as well as the reality of police and state violence. XR participants should be able to use their privilege to risk arrest, whilst at the same time highlighting the racialized nature of policing. Though some of this analysis has started to happen, until it becomes central to XR’s organizing it is not sufficient. To address climate change and its roots in inequity and domination, a diversity and plurality of tactics and communities will be needed to co-create the transformative change necessary.

We commend the energy and enthusiasm XR has brought to the environmental movement, and it brings us hope to see so many people willing to take action. But as we have outlined here, we feel there are key aspects of their approach that need to evolve. This letter calls on XR to do more in the spirit of their principles which say they “are working to build a movement that is participatory, decentralized, and inclusive.” We know that XR has already organized various listening exercises, and acknowledged some of the shortcomings in their approach, so we trust XR and its members will welcome our contribution.

As XR draws this period of actions to a close, we hope our letter presents some useful reflections for what can come next. The list of demands that we present below are not meant to be exhaustive, but to offer a starting point that supports the conversations that are urgently needed.

Wretched of the Earth, together with many other groups, hold the following demands as crucial for a climate justice rebellion:

The fight for climate justice is the fight of our lives, and we need to do it right. We share this reflection from a place of love and solidarity, by groups and networks working with frontline communities, united in the spirit of building a climate justice movement that does not make the poorest in the rich countries pay the price for tackling the climate crisis, and refuses to sacrifice the people of the global South to protect the citizens of the global North. It is crucial that we remain accountable to our communities, and all those who don’t have access to the centres of power. Without this accountability, the call for climate justice is empty. •

This article first published on the Red Pepper website.

Wretched of The Earth is a grassroots collective for Indigenous, black, brown and diaspora groups and individuals demanding climate justice and acting in solidarity with our communities, both here in the UK and in Global South. Social media contact at facebook.com/wotearth.