Western governments and the xenophobic far right are engaged in a veritable war on Muslims. One way in which this attack unfolds is an ongoing effort to force Muslims to embrace dominant ‘values’ and change their forms of dress or abandon religious observances. Though he was not speaking exclusively about Muslims, the infamous war criminal, Tony Blair, recently sounded off on this very theme of the obligation to ‘integrate’ and was challenged very powerfully by Aditya Chakrabortty in The Guardian. 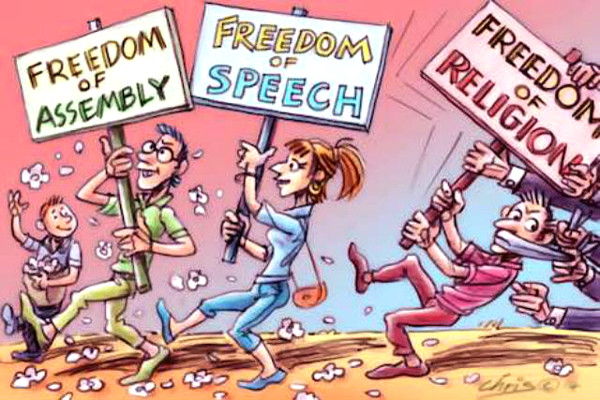 As this vicious and escalating attack on Muslim communities unfolds, many on the left appreciate clearly its racist nature and the need for active solidarity with those on the receiving end. However, there are others whose ideological opposition to religion is rather rigidly applied and, when the hijab, niqab or burka come up or the issue of prayer rooms is considered, they fall into equivocation or worse. On my own Facebook page, which probably offers a fairly good sampling of broad left opinion, posts that deal with such matters always bring in comments on the need to keep religion out of schools and musings on the need to ‘save’ Muslim women from their own lack of enlightenment and assumed male coercion. In some instances, this viewpoint takes the form of equivocation, but there are leftists who will actually support the position that no one wearing the hijab should be allowed to teach in school and who actively campaign for Muslim prayer rooms in schools to be closed down.

Though I am on the political left and support secular public institutions, I give this perspective the somewhat tongue in cheek title of ‘left secularism.’ In my view, it is a mistaken approach that renders those who adopt it passive (or even complicit) in the face of the reactionary and highly dangerous proliferation of Islamophobia. I want to deal more fully with this, but, first, there are a couple of more general questions to consider about freedom of religion and the very valid and important issue of secularism.

I was once accused by a left advocate of the ‘burka ban’ of being part of the ‘pro-Islamic left.’ Actually, I am an ideological opponent of religion in general, though not Islam in particular. I think all the major religions play a reactionary role and I work for a society where the need for religious faith no longer exists. However, I am also strongly of the view that the only just and viable approach is to defend religious freedom. I see no contradiction here. Even with progressive intentions, the use of prohibition and restrictions against religious believers would be both wrong and futile. When such measures are selectively employed by reactionary governments, however, the duty to oppose them is absolutely clear cut. To give any support to attacks on a religious minority should be unthinkable. I would agree, for example, that the Roman Catholic Church is a thoroughly reactionary institution, but Northern Ireland in the late 1960s was not the time or place for progressives to raise the anti-Catholic banner.

How then does the important principle of secularism fit into the situation? I fully agree that it is a vital principle that we should struggle for and defend. Sadly, though, there is considerable misunderstanding on just what it is. The state and its institutions should be secular and not endorse or promote any brand of religion. Laws should not be enacted in the name of a Supreme Being. Parliaments and legislatures should not display religious symbols, and the school day should not begin with a prayer. However, what of those whose religious obligations require that they dress a certain way or perform rituals or prayers at particular times? The Canadian state has, to some degree, accepted the principle of ‘reasonable accommodation’. In the area of religion, it accepts that reasonable efforts should be made to enable workers or users of public services to adhere to the obligations of their particular faith. I think it enormously unfortunate when leftists take a worse position than the state on such an issue.

It is a violation of the principle of secularism for school pupils to be compelled to start the day with a prayer, but it is not interfered with when those whose religion requires an act of worship are given a separate space where they can comply with this. It is a gross and fundamental breach for a crucifix to hang from the wall of the Quebec National Assembly, but it is outrageously unfair to tell a teacher, as Quebec’s Bill 21 does, that she can’t wear the hijab or to threaten the employment of a government worker who wears a turban. A crucifix in a legislature is an endorsement of Christianity, while a teacher wearing the hijab hardly makes her school an Islamic institution. She is merely a worker and community member dressing as her conscience and personal choices dictate, and it would be enormously sad to stand aside when her rights are being trampled on by a racist government playing to its bigoted cheering section.

The proposition that we are living in a period when anti-Muslim hatred is rampant and worsening is so self evident that there is hardly a need to call for evidence or to advance any major supporting argument. Countries with majority Muslim populations are under attack by U.S. led Western imperialism. Muslim populations in the West face massive persecution. Governments feed this trend, and wide sections of the media fuel it. Laws are passed that target Muslims, with the above-mentioned Quebec legislation as but one example. While white supremacist terror increases horribly, the terrorist label is reserved almost entirely for Muslims. For every lethal attack on Muslims by far-right racists, drawing strength from the Islamophobia of the political mainstream, there are hundreds of assaults and thousands of abusive incidents. The pursuit of endless war, the need for an ‘enemy within’ in the age of austerity, and the rise of the populist right have all worked to ensure that Islamophobia is the prejudice of choice in Western societies, including Canada.

This Islamophobic context is utterly decisive. I came across a video taken in a Danish supermarket some months after a ban on the niqab and burka was introduced last year. Watching the horrible racist attack, and seeing the interview with the woman afterwards, makes something abundantly clear. You have to consider the position you take based on exactly this kind of sickening daily reality. You have to respond to the orchestrated persecution of Muslims that is unfolding. The woman in the video is not asking you to endorse her religious beliefs or approve of her clothing choices, but she does have a right to go about her life without insult and attack, and she does have a valid demand for your solidarity. Perhaps the famous comment by Arundhati Roy on the burka ban can help to drive that home. If you support the ban that has fuelled the climate of racist vigilanteism at work here or, if you equivocate on it, your disorientated view of ‘secularism’ has led you astray disastrously. Surely, we must actively function as the allies of Muslim people in such a situation.

In the introduction to A Contribution to the Critique of Hegel’s Philosophy of Right, Marx famously argued that, “Religion is the sigh of the oppressed creature, the heart of a heartless world, and the soul of soulless conditions. It is the opiate of the people.”

A little further on, he added, “The abolition of religion as the illusory happiness of the people is the demand for their real happiness. To call on them to give up their illusions about their condition is to call on them to give up a condition that requires illusions. The criticism of religion is, therefore, in embryo, the criticism of that vale of tears of which religion is the halo.”

Religious-minded allies will forgive me, I hope, if I end this with my socialism and atheism on display. I want a society where the need for religion is replaced by a sense of solidarity and purpose among people no longer dominated by the profit needs of a few but who work together to make life as rich and beautiful as it can be. I believe that the movements we build against the present system can begin that process of ending the need for ‘illusory happiness’. From the words of Karl Marx and the conclusions I draw from them, however, I see little reason to regulate how anyone dresses or to try to ban their religious devotions in the name of a distorted ‘secularism’. I see, in fact, plenty of reasons to challenge the racist upsurge of Islamophobia and to show the fullest solidarity with Muslim communities under attack. •