Warning: mysqli_query(): MySQL server has gone away in /home/socialis/public_html/wp/wp-includes/wp-db.php on line 2162

Warning: mysqli_query(): Error reading result set's header in /home/socialis/public_html/wp/wp-includes/wp-db.php on line 2162
 Growth in Renewables has Stalled. Investment is Falling. But Why? - The Bullet

Growth in Renewables has Stalled. Investment is Falling. But Why?

The International Energy Agency (IEA) recently announced that the growth of capacity additions to renewable power generation stalled in 2018, after nearly two decades of growth. Calling the new findings an “unexpected flattening of growth trends,” the IEA noted that this development raises serious questions about reaching climate targets. Net new capacity from solar photovoltaic (PV), wind, hydro, bioenergy, and other renewable power sources increased by about 180 Gigawatts (GW) in 2018, the same as the previous year. That’s roughly twice the annual installation of a decade ago. But, according to the IEA, it’s “only around 60% of the net additions needed each year to meet long-term climate goals.”

Why is this happening? We are constantly reminded that the costs of renewable capacity have fallen spectacularly in recent years. According to the latest estimates of annual “levelized cost of energy” (LCOE) from Lazard – the world’s largest investment company – the average cost of solar PV has dropped 88% since 2009, while that for wind has fallen 69%. This pattern of falling costs is often invoked to allay any concerns about lagging investment in renewable capacity, since every million dollars invested can buy significantly more installed capacity than just a few years ago.

But if a given amount of investment today can buy considerably more capacity than it could have in the recent past, then stalled growth in renewables must mean that investment, in real dollars, must also be falling. In fact, Bloomberg New Energy Finance (BNEF) had already reported a drop in investment in mid-2018, to the lowest in four years. Six months later, with the publication of its annual Clean Energy Investment Trends in early 2019, BNEF reported an 8% decline in investment between 2017 and 2018 (from $362-billion to $332-billion). And this fall in investment has occurred during a period of extremely low interest rates. This is significant because the main contributor to the cost of renewables is not the actual technologies themselves, but the cost of borrowing money for projects – in other words, interest rates. So any future rise in rates would act as a significant further brake on investment levels.

The recent BNEF data confirm that, despite dramatic cost declines over the past decade, investment is indeed falling, and the IEA’s numbers show that, globally, deployment has essentially flatlined. This is happening at a time where both investment and deployment need to be rising steadily if the world is to have any chance of reaching the Paris targets.

But if we dig a little deeper into the recent data, we begin to see that the issue isn’t simply a flattening of global deployment, or a one-year fall in investment, but something much more worrying. As the BNEF chart below shows, if China’s investment in renewables is taken out of the picture, it becomes clear that investment for the “rest of the world” has not suffered a minor setback, but is actually falling to worryingly low levels – in what is already three consecutive years (and even that was following a small uptick after a previous fall, from the historic high in 2011): 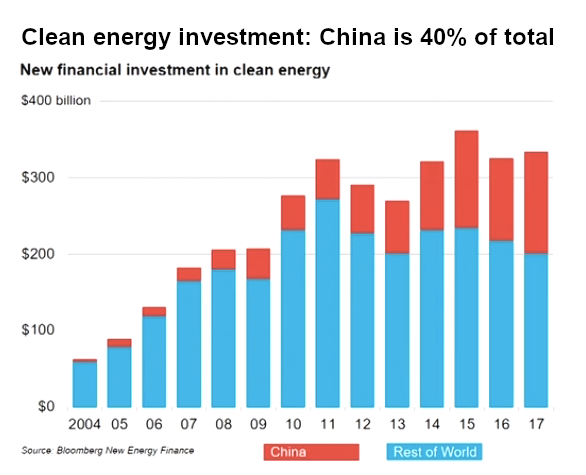 We’ll return to China in a moment, but let’s make sure we understand this “rest of the world” performance first – because it will turn out to be important for understanding China.

Facing the Truth of “Poor Fundamentals”

Let’s get to the heart of the problem: We are told repeatedly that the falling costs of renewable generation capacity makes renewables “more competitive” with fossil fuels, and that each new record low auction result for solar or wind is a reason to celebrate. From the standpoint of private investment and profit making, however, falling auction prices are hardly a good thing. As governments have turned away from “come one, come all” feed-in-tariffs toward more competitive bidding regimes where the “winner takes all,” there are pressures to win the bid in order to secure a 20-year subsidy in the form of a “power purchase agreement” or PPA. The bidding process has driven down contract prices even faster than the real costs of building the projects have fallen (due to “learning by doing,” economies of scale, technological improvements, etc.). Investors then see diminishing profit margins and lose interest. (“Too bad about the planet but, hey, there are many other things to invest in.”) As one analyst writing for Risk Magazine puts it:

Under the current policy approach, private project developers have avoided risk and expanded their market share through PPAs with government entities, or with utilities that are mandated to reach renewable energy targets. But the “guaranteed returns” that such PPAs ensure for investors often translate into higher electricity costs for users, which can quickly translate into “political risk” when electricity users start complaining about rising bills. Governments then phase out – often abruptly – the policies that made investment in renewables attractive in the first place. This is what happened in Europe where, once subsidies for renewables were scaled back, investment collapsed: 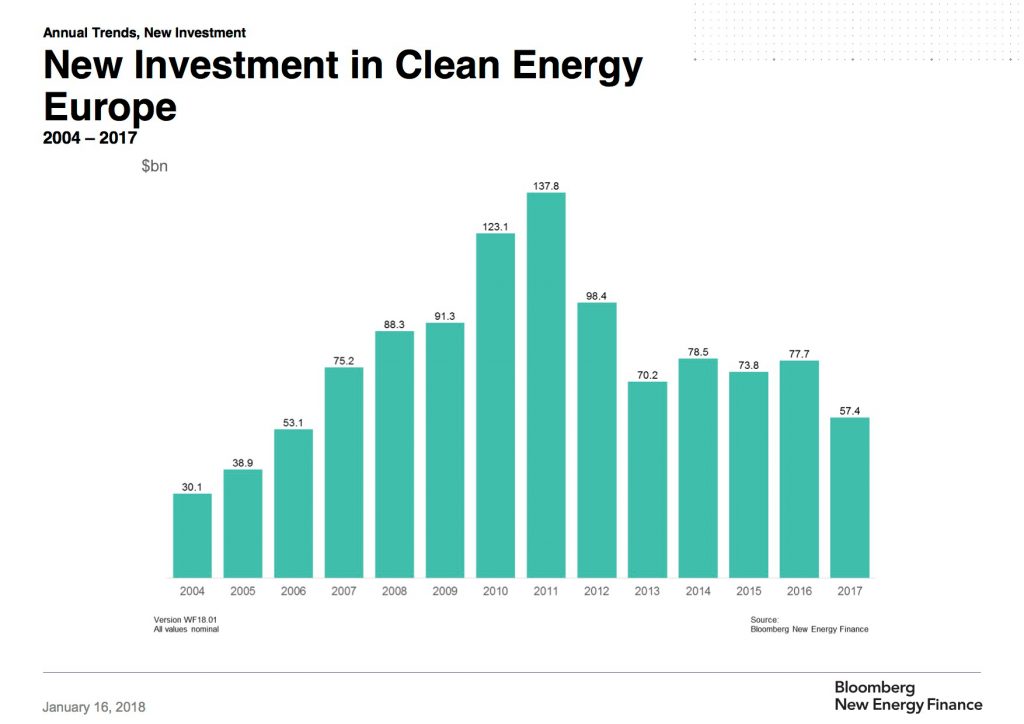 Because of falling auction prices, many people still assume that the market share of renewables will reach a “tipping point” once they become the “least cost option.” But because there is simply not enough profit in “low carbon solutions” like renewable power generation – at least, not without subsidies – renewables are unlikely to attract the levels of capital needed to achieve the Paris targets.

By now, the message should be clear: The insistence on private-sector-led investment in renewables, which we are told needs to be “unlocked” through various incentives – subsidies, feed-in-tariffs, guaranteed returns through PPAs, etc. – has proven to be a disastrous failure. This is the reason why renewables are “underperforming.” This is what must change if deployment is to reach the levels needed to meet the Paris targets.

From the perspective of mass deployment of publicly owned and controlled renewable energy, falling costs are good news. Where governments are able to fund infrastructure projects directly, they can do so; where they need to borrow, they can access financing at lower interest rates than private developers. In either case, the costs of installation can be recouped through managed retail electricity prices, without the need to generate an additional profit margin for climate-blind private investors looking to make handsome returns while avoiding risks. At the same time, the phasing-in of renewables can be coordinated in tandem with grid upgrading, development of storage technologies, digitalization and conservation.

But What about China?

We still need to understand what is happening with China, and why its investment has continued to grow while the rest of the world has lagged. China’s approach to tackling the energy transition has differed from that of many other countries, involving significantly more centrally driven planning and coordination. But it has still relied heavily on mechanisms like those that have been used in Europe, the USA and elsewhere: feed-in tariffs, power purchase agreements, etc. In fact, the country’s 13th “Five Year Plan” on energy development, released in March 2017, refers favorably to the German renewable energy development pathway as an example that shows the way forward. Given that, we shouldn’t be surprised to learn that China, like Germany, has seen a significant burst in capacity growth by using similar policy mechanisms.

But the story doesn’t stop there. Like Germany, China’s boom has produced significant overcapacity – beyond what can be successfully integrated into the system and put to use – as well as ballooning subsidy bills. Once we know that, we shouldn’t be surprised to learn that China’s investment in renewable capacity actually took a sharp turn downward in 2018. On June 1, 2018, in an effort to contain exploding subsidy bills and growing overcapacity, the country’s National Development and Reform Commission announced that, effective immediately, approvals for new projects had been “halted until further notice,” and tariffs for existing contracts would be lowered by 6.7 to 9 per cent (depending on the region). The announcement caught nearly everyone by surprise; it caused serious drops in share price values for Chinese solar companies, and various industry players and observers immediately slashed capacity growth forecasts for the year by as much as one-third. In fact, the fallout from the announcement was so severe that the government subsequently partially reversed course, and is now reviewing its subsidy policy regime.

So the trajectory of China’s investment and deployment in renewable energy seems likely to follow the same pattern as “the rest of the world” – it’s just starting a few years later. And another “green miracle” genie will quietly find its way back into the “business as usual” bottle. With the IPCC telling us we have just 12 years left to limit average warming to 1.5 degrees C, we might want to ask: How many wishes do we have left?

For those familiar with the analysis offered in TUED’s Working Papers and other publications the recent IEA and BNEF data will not have come as a big surprise. The problems with the profit- and investor-focused approach to power sector decarbonization were analyzed in detail in TUED’s Working Paper 10, Preparing a Public Pathway: Confronting the Investment Crisis in Renewable Energy (2017), and more recently in our discussion document for COP24, When “Green” Doesn’t “Grow”: Facing Up to the Failures of Profit-Driven Climate Policy.

We encourage you to use these papers to make the case for a decisive shift away from investor-focused policies, and toward reclaiming energy to public ownership and democratic control, toward public financing at “New Deal” levels to scale up deployment, and toward the restoration of energy planning and delivery as a “public good.”

We don’t need “more ambition.” We need a radically different approach to the transition. •

This article first published on the Unions for Energy Democracy website.

Sean Sweeney is Director of the Murphy Institute's International Program on Labor, Climate, and the Environment at the School of Labor and Urban Studies, City University of New York. And he writes for New Labor Forum and Trade Unions for Energy Democracy (TUED).