A Vote For Apartheid: The End of the Two States Proposal

Katja Hermann, director of the West Asia Unit at the Rosa-Luxemburg-Stiftung in Berlin, in conversation with Dr. Mustafa Barghouti, general secretary of the Palestinian National Initiative (Mubadara), about the impact of the Israeli elections on the lives of everyday Palestinians.

Katja Hermann (KH): The preliminary results of the Israeli election show a likely victory for Benjamin Netanyahu from Likud and the right-wing coalition. What would that mean for the developments in the occupied Palestinian territories? 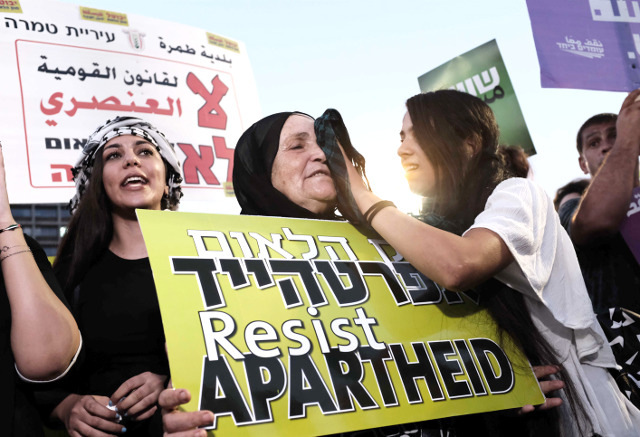 Mustafa Barghouti (MB): It is a very dangerous development. It means that the Israeli public has opted for extreme right wing parties that adopted a system of racism and national discrimination, the same parties that passed the Jewish Nationality Law, meaning systematic discrimination against Palestinians, whether citizens of Israel or of the Occupied Territories. Unfortunately, I would say that this is a vote for a system of apartheid. Taking into consideration that Netanyahu was elected three days after he declared his plan to annex the settlements, which means practically annexing the West Bank, this was a vote to end the dream of the two-state solution.

KH: If the two-state solution is no longer feasible, what kind of alternative scenarios do you envision?

MB: There are only two alternatives: one is what the Israeli government wants, which is apartheid, a system of racial discrimination keeping Palestinians in ghettos and Bantustans hoping they will eventually leave the country. Our alternative is the following: if they killed the two-state solution intentionally, we have nothing left to fight for but a one-state solution with full democratic rights, and unify all Palestinians in a struggle to end apartheid and racial discrimination and try to win people from Israel who believe in justice over to our camp against the system of apartheid.

KH: Do you believe that both societies, Palestinian and Israeli, are ready for a one-state solution?

MB: At the moment, of course, Palestinian society is much more ready, while Israeli society does not seem to be ready for any solution. In my opinion, to use a phrase that my friend Daniel Barenboim keeps using, “sometimes the impossible is easier than the difficult.” What we face here is a clear choice. It is not about us wanting to depart from the two-state solution and adopt a one-state solution, it is about the fact that Israel just killed the two-state solution. You cannot opt to dream about a dead option, you have to find an alternative option – out of necessity, out of objective reality.

KH: People here are talking about a new era, that a new chapter will be opened. How would you comment on that?

MB: I would say it is the end of the Oslo era, which means we have to go back to an era before Oslo, a time when the non-violent Palestinian resistance adopted three principles that I always believed in and practiced: self-organization, self-reliance, and defying injustice – whether of occupation or apartheid. To keep waiting for others to help us is not feasible. We have to rely on ourselves, we have to rebuild our structures, we have to self-organize, and we have to build a national unified front. That should be a democratic national front, because one major problem in Palestine now is the absence of democracy and the disappearance of democratic structures that we have built over the years, and the shrinking spaces of civil society.

That’s why I think that it’s time for us to think about democratic participation as well as building a unified national front. The Palestine Liberation Organization (PLO) should be that structure if it opts to separate itself from the Palestinian Authority (PA) and return to its role as a leader of the Palestinian national movement.

KH: Where would you situate the Gaza Strip in these scenarios?

MB: Gaza is part of Palestine. Israel is trying to separate Gaza from Palestine because this is part of the so-called “Deal of the Century.” You separate Gaza but keep it under siege, that is the Israeli plan. The situation is one of an open prison – not even open, only an open sky, everything else is closed. We cannot have a Palestinian state without Gaza and we cannot have a state only in Gaza – that is nonsense. Gaza is a very small territory; it’s less than 1.5 per cent of Palestine and has two million people living there, the most densely populated area in the world. Gaza and the West Bank should be one unit.

MB: There are many challenges, but the first challenge is how to bring back unity to the Palestinians. The Palestinian National Initiative (Mubadara) decided not to join this government, although we were offered to, mainly because we were afraid that forming this government would even deepen internal division and transform it into complete separation. Additionally, we don’t want to take a position in any government without being elected by the people, especially after dissolving the Palestinian Legislative Council (PLC). The last elections happened in 2006 and we should have new elections soon, very soon. That’s why we’ve proposed not to form this government but to have a transitional national unity government for six months, prepare the ground for elections, hold elections, and then form the government.

I think the problem of internal division is a big one, but now this Israeli government and how it is cutting off our tax revenues and imposing its own legislation and arrangements on the PA is the biggest problem. The whole PA now faces a major challenge to either be completely obedient and submit to Israeli pressure or revolt against it. I think they should revolt.

KH: In light of these challenging developments, do you see another popular uprising on the horizon?

Dr. Mustafa Barghouti is general secretary of the Palestinian National Initiative (Mubadara), a physician, and an activist. Follow his tweets at @mustafabarghoti.