SITUAM, Sindicato Independiente de Trabajadores de la Universidad Autónoma Metropolitana (Independent Union of Workers of the Metropolitan Autonomous University), is an industrially organized university union; that is, it represents scholars as well as both blue-collar and white-collar workers. The Universidad Autónoma Metropolitana (UAM) is the third largest federal university1 in Mexico by size and ranks second in research projects, just below UNAM, the Mexico National Autonomous University. It has 60,000 students and 8,000 employees spread over five campuses (Azcapotzalco, Iztapalapa, Xochimilco, Cuajimalpa y Lerma) in the greater Mexico City area. 75% (6000) of its 8,000 workers are members of the union. 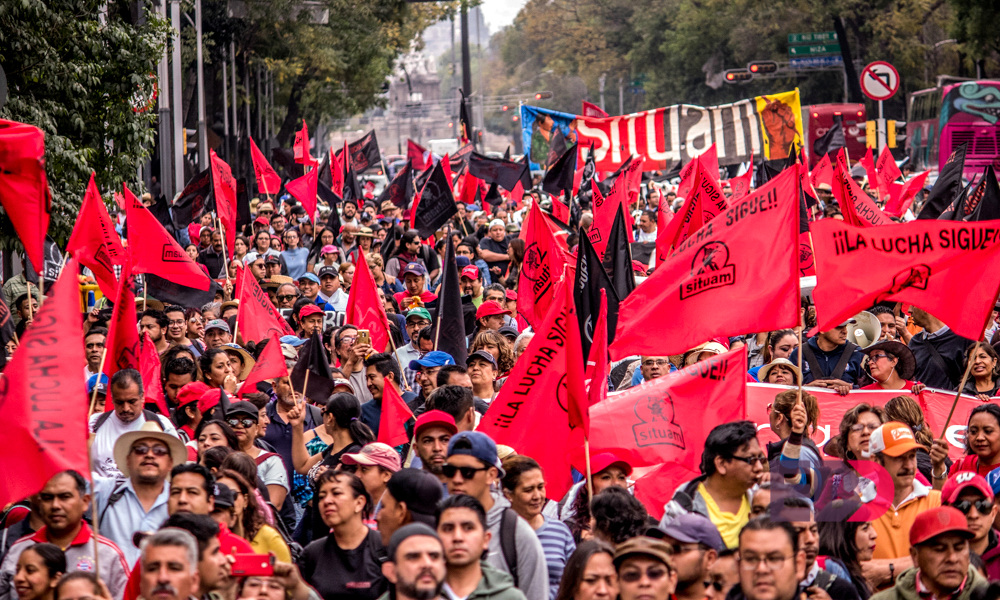 The union has a militant tradition, as many of its professors had been politically influenced by their participation in the massive student movement of 19682 and hired by the newly formed UAM in its first six years of existence, 1974-1980. As well, a large portion of the blue-collar workers are internal migrants from Oaxaca, Mexico’s most indigenous state, as well as from other indigenous areas of Mexico. They bring rich cultural traditions to the workplace and the union, which include a strong sense of solidarity and collective struggle.

The ongoing strike, which started February 1, 2019, is the longest in the history of the university, as well as the largest and most protracted strike in the first period of the government of AMLO (Andrés Manuel López Obrador), which took office on December 1, 2018. The strike of SITUAM has converged with the first major mobilizations of the dissident teachers in this new period. The teachers of Oaxaca, Michoacán, and Chiapas have carried out massive protest marches in Mexico City, as well as surrounding and disrupting the activities of the National Congress on at least four occasions since last November 20.

They are protesting the new government’s failure to fulfill its campaign promise of completely revoking the neoliberal educational reforms enacted between 2013 and 2017. They are demanding the total abrogation of these reforms, reforms aimed at building authoritarian control, typical of private companies, over public schools throughout the country. The inquisitorial evaluations of the teachers during this period led to hundreds of unjustified dismissals in what was known as the cycle of the Neoliberal Educational Reform.

The new government has promised to expand workers’ rights within a strategy of development aimed at attracting foreign investment and avoiding hostility from the U.S. government, and U.S. and Mexican business. The SITUAM strike, as well as the teachers’ mobilizations and the strike wave in the maquilas of Matamoros in the first three months of 2019, follow a long period with very few strikes, a period of pride for the Mexican government in showcasing Mexico as a business-friendly country. There were no strikes of workers under federal jurisdiction3 in the 2016-2018 period.

The union has called for an across-the-board wage increase of 20% and a solution to various violations of the collective contract. Real wages of workers have fallen by 60% since the founding of the UAM in 1974 and, in a deliberate attempt to weaken the union, the University has violated the collective contract, most importantly in the categorizing of many newly-hired workers as empleados de confianza, thus excluding them from union membership and making an end-run around the closed shop section of the collective contract. The ISSSTE (Institutode Seguridad y Servicios Sociales de los Trabajadores del Estado – Institute for Social Security and Services for State Workers) calculates that the UAM has thus hired 1,800 workers outside the Collective Contract. This managerial strategy violates both the Collective Contract and the Federal Labour Law, and the inflated salaries of these 1,800 employees absorbs 31% of the total budget of the University – almost double of that received by the 4,500 blue-collar workers of UAM.

The SITUAM strike is being watched carefully by workers and unions throughout the country as a test case of the capacity and possibilities of union militancy to break the control and wage chains of neoliberal policies. The recent strikes of Los Mineros (the miners’ and steelworkers’ union) as well as those of the maquila workers in Matamoros provide precedents in the private sector, as the workers won settlements above inflation in 2018. However, the strike of SITUAM is especially sensitive because it is the first strike of workers under federal labour jurisdiction defying the AMLO government’s “republican” austerity policy, which has defined a rigid 3.5% salary cap. The SITUAM strike challenges the tacit policy of AMLO for financing his social policy on the backs of public sector workers’ salaries and working conditions rather than increasing taxes on Mexico’s powerful rich whose contribution to the public Treasury is practically nil. Taxing big capital would break with tradition and undermine the strategy of partnership with big business for development.

The Context of the SITUAM Strike

Mexican workers form the nucleus of the largest industrial proletariat in all Latin America. They are even more numerous than the Brazilian industrial work force, a work force diminished by the severe recession of recent years. There were 4.8 million factory workers registered with the IMSS (Instituto Mexicano de Seguro Social – Mexican Social Security Institute) at the end of 2015. The ENOE (Encuesta Nacional de Ocupación y Empleo – National Survey of Occupation and Employment) estimates that if this figure included the underground industrial economy, which operates in small maquilas and home industries but is even more exploited than the formal sector workers registered with IMSS, the number of industrial workers would rise to 8.3 million.

Given that the labour law reform of the AMLO government has as its main objective the preservation of labour peace and the containment of union action within the moderate policy of the new government, the SITUAM strike presents an awkward challenge for the AMLO government. The strike goes on as the Senate prepares to discuss the hotly debated and limited federal labour law next week. The MORENA4 majority in the Senate has shown itself to be much more independent than the Morena majority in the Chamber of Deputies, which has already approved the labour law reform.

And as May Day approaches, a day in which AMLO hopes to celebrate the marriage between his class harmony strategy and his populism, the ongoing SITUAM strike threatens to disrupt the marriage and the celebration. It’s crucial for the future of workers in Mexico and North America that Mexico’s labour-reform commitment to the new NAFTA (USMCA) does not lead to a compromise with the past undemocratic practices of Mexico but contains genuine legislative changes that return real bargaining power to workers. •

Richard Roman is the coauthor of Continental Crucible: Big Business, Workers and Unions in the Transformation of North America. He is professor emeritus of sociology at the University of Toronto.

Edur Velasco Arregui is the coauthor of Continental Crucible: Big Business, Workers and Unions in the Transformation of North America. He is the former Secretary-General of SITUAM (Sindicato Independiente de Trabajadores de la Universidad Autónoma Metropolitana), a union activist, and a professor in the Department of Law at the Universidad Autónoma Metropolitana in Mexico City.